ROLE OF BAP1 IN MESOTHELIOMA AND MELANOMA PREDISPOSITION 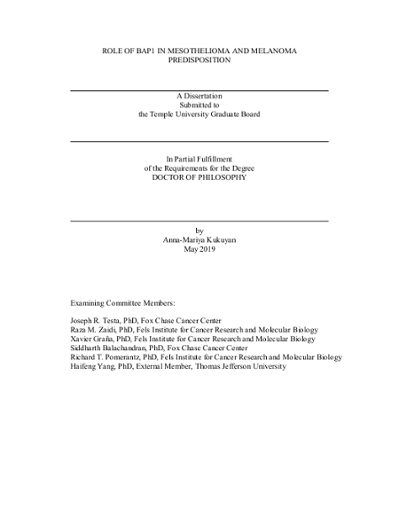 BAP1 (BRCA-Associated Protein1) is a tumor suppressor gene encoding a deubiquitinating enzyme (DUB) that regulates many facets of cellular biology. Genetic studies have demonstrated that somatic BAP1 mutations occur in numerous cancer types and that germline BAP1 mutations lead to a cancer susceptibility disorder that predisposes individuals to various tumors, in particular malignant mesothelioma (MM) and both uveal melanoma (UM) and cutaneous melanoma (CM). The Testa laboratory has identified several families (including one in Louisiana, designated Lou) with germline BAP1 mutations, in which there were recurrent cases of MM, UM, and CM. We generated a Bap1 mutant mouse model with a knockin mutation identical to that observed in the Lou family (Bap1+/Lou ) to test whether this mutation alone confers susceptibility to ultraviolet (UV) light-induced melanomagenesis either alone or in combination with a mutation found in a well-established Hepatocyte Growth Factor (HGF)/Scatter Factor transgenic mouse model. Neither Bap1+/Lou, HGF, nor Bap1+/Lou;HGF mice showed a significantly higher incidence or shorter latency of UV light-induced melanoma than wild type (WT) mice. The study also suggests that germline mutation of Bap1 alone does not cause an increased incidence of UV-induced melanomas under the conditions used in this investigation. Recent evidence indicates that BAP1 participates in the DNA damage repair response, suggesting that BAP1’s role in tumorigenesis could be particularly important in cancers associated with environmental carcinogens such as ultraviolet irradiation (UVR). To further investigate the role of BAP1 (Bap1 in the mouse) in DNA damage, we first knocked down BAP1 in human melanocytes as well as Melan-A and Melan-C mouse melanocytes and then exposed the cells to UVR, followed by analysis of DNA damage repair. UVR-induced and steady state levels of DNA damage were higher in BAP1-knockdown cells compared to shGFP-control cells. Levels of UVR-related DNA damage markers such as p53, γH2AX and CPD (cyclobutane pyrimidine dimers) were increased following BAP1 loss and UVR treatment. Cell cycle analysis by flow cytometry demonstrated that cells with knockdown of BAP1 and post UVR treatment showed a higher proportion of cells in S/G2 phase. Such an effect could be due to BAP1 loss and consequent inability to repair DNA damage and/or cell cycle progression. These data are consistent with a role for BAP1 in UVR-induced DNA damage repair. In MM, it is unclear to what extent BAP1 mutations cooperate tumorigenically with mutations of other tumor suppressor genes (TSGs) implicated in MM, such as CDKN2A and NF2. While germline mutations of BAP1 clearly predispose to MM, whether somatic mutations of BAP1 drive a more aggressive, metastatic tumor phenotype may depend on the disease type. For such studies, we used conditional knockout (CKO) mice along with intrathoracic (IT) or intraperitoneal (IP) injection of adenovirus expressing Cre recombinase (Adeno-Cre) to excise critical homozygously floxed TSGs in the mesothelial lining. These labor-intensive experiments demonstrated that while homozygous deletion of Bap1, Cdkn2a, or Nf2 alone in the pleural cavity (IT) of genetically engineered mouse (GEM) models gave rise to few or no MMs, inactivation of Bap1 cooperated with loss of either Nf2 or Cdkn2a to drive development of MM in ~20% of double CKO mice, and a high incidence (22/26, 85%) of MMs with short latency (12 weeks) was observed in Bap1;Nf2;Cdkn2a (triple)-CKO mice. The same trend was confirmed when the same gene combinations were homozygously deleted IP in these same GEM models, except that a much higher incidence of MM was observed in homozygously floxed Bap1 (Bap1f/f) mice injected IP versus IT, which may be due to a larger cell surface area of the peritoneum. Adeno-Cre treatment of normal mesothelial cells from Bap1f/f;Nf2 f/f;Cdkn2 f/f mice, but not from mice with knockout of one or any two of these tumor suppressor genes, resulted in robust spheroid formation in vitro, suggesting that homozygous deletion of all three of these TSGs is sufficient to drive a cancer stem cell-like potential. RNA-seq analysis of pleural MMs from triple-CKO mice revealed enrichment of many genes transcriptionally regulated by the polycomb repressive complex 2 (PRC2). Other genes upregulated in MMs from triple-CKO mice included Vegfd and Pak3, which encode proteins involved in angiogenic and cell motility pathways. In conclusion, we hypothesize that inherited mutations of BAP1 may increase susceptibility to certain environmental factors that may induce DNA damage and contribute to cancer development. Our data also indicate that cooperative somatic inactivation of Bap1, Nf2, and Cdkn2a results in rapid, highly aggressive MMs, and that deletion of Bap1 contributes to tumorigenesis, in part, by loss of PRC2-mediated gene repression of tumorigenic target genes and by acquisition of stem-cell potential. Thus, our studies suggest a potential avenue for therapeutic intervention.