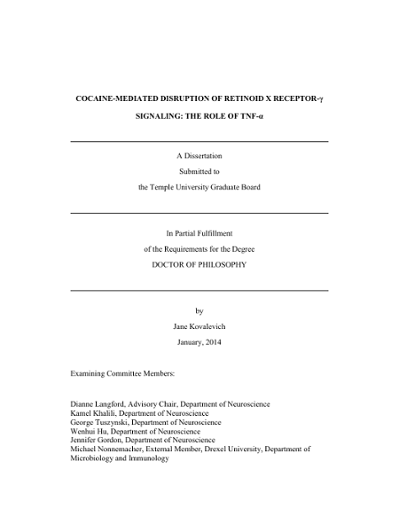 Cocaine abuse poses a substantial health and economic burden for which no effective treatment currently exists. Exposure to cocaine results in altered signaling in a number of central nervous system (CNS) pathways. Previous studies have primarily focused on neurotransmitter systems, such as the dopaminergic and glutamatergic systems, as well as on drug-induced neuroplasticity within the mesolimbic system, which is believed to contribute to reward, addiction, and relapse following withdrawal. Furthermore, cocaine exerts a number of effects on gene regulation that contribute to many pathological conditions commonly afflicting users such as mood disturbances, psychotic symptoms, and long-term cognitive dysfunction. While some mechanisms by which cocaine regulates gene expression have been well-characterized, a large gap in our understanding regarding its downstream actions still exists and must be elucidated in order to develop effective treatment strategies. One pathway we have discovered to be disrupted in an animal model of chronic cocaine abuse is the retinoid X receptor (RXR) signaling pathway. Retinoid X receptors serve as obligate heterodimer partners for a number of nuclear receptor transcription factors, including the thyroid hormone receptor (TR), retinoic acid receptor, vitamin D receptor, and peroxisome proliferator activated receptor. Heterodimeric complexes bind to specific recognition sequences in or around the promoter of target genes to activate, or in some cases, repress, transcriptional activity. Therefore, alterations in the levels and function of RXRs can potentially disrupt numerous signaling cascades. In this context, we observed a significant down-regulation in mRNA and protein levels of RXR-y, an isoform predominantly expressed in the CNS that is involved in dopaminergic signaling, in brains of cocaine-administered mice. Additionally, we observed significantly decreased levels of the neuroplasticity protein, neurogranin, which is regulated transcriptionally by TR/RXR heterodimers. Mechanisms underlying regulation of RXR levels in cells of the CNS are vastly unexplored. Studies in other organ systems, including liver and cardiac systems, demonstrate pro-inflammatory cytokines and cellular stress pathways exert repressive effects on RXR signaling, although these studies solely investigated regulation of the RXR-a isoform. Recently, studies have highlighted the role of the immune system during chronic drug abuse, and demonstrate that significant amounts of proinflammatory factors are produced in the brains of chronic cocaine abusers. Therefore, we hypothesized that cocaine-mediated induction of inflammatory cytokines, such as tumor necrosis factor (TNF)-a may contribute to decreased RXR-y expression within the CNS. Utilizing in vitro neuronal systems, we have demonstrated that cocaine exposure induces neuronal expression of TNF-a and that this contributes to decreased levels of RXR-y, as inhibition of TNF-a or its downstream effector c-Jun-NH2-terminal kinase (JNK) prevents cocaine-mediated reductions in RXR-y protein levels. Furthermore, treatment of neurons with TNF-a alone mimics the effects on RXR-y levels observed in cocaine-treated cells. Additionally, we show that proteasome-dependent protein degradation likely plays a role, as inhibition of the 26 S proteasome with Bortezomib during cocaine or TNF-a exposure blocks the down-regulation of RXR-y levels. Degradation of RXR-y in response to cocaine and TNF-a may involve nuclear export, as our results show an increased level of RXR-y in the cytoplasmic compartment shortly after treatment, and inhibiting nuclear export during treatment with Leptomycin B prevents decreases in whole cell protein levels of RXR-y. In addition to the effects of chronic cocaine abuse on neurons, other CNS cell types such as oligodendrocytes may be negatively impacted by exposure to cocaine. Imaging studies and post-mortem microarray data from human cocaine abuse patients reveal loss of myelin and down-regulated expression of myelin-related genes in the nucleus accumbens and frontal cortex. Altered myelin integrity likely contributes to cognitive deficits that present in many chronic cocaine abuse patients and may also exacerbate damage to neurons. However, limited investigation has been performed to evaluate the effects of cocaine on oligodendrocyte health and function. We have employed an in vivo murine model of chronic cocaine administration to evaluate the impact of cocaine on white matter protein levels. Our data reveal that cocaine induces a significant decrease in white matter protein levels, even following an extended period of withdrawal, in the nucleus accumbens. One potential mechanism for cocaine-mediated white matter damage involves perturbations of glutamate homeostasis, as glutamatergic signaling can induce excitotoxicity in CNS cells, including oligodendrocytes. In this context, we found that administration of the B-lactam antibiotic, ceftriaxone, during cocaine withdrawal ameliorates loss of white matter proteins. Ceftriaxone has previously been shown to upregulate expression and activity of the glial glutamate transporter GLT-1, lending support to the theory that cocaine-mediated myelin loss may be due, in part, to disruption of glutamatergic signaling. Ceftriaxone treatment also decreased expression of cleaved caspase-3, a pro-apoptotic signaling molecule activated during excitotoxic cell death, in cocaine-administered mice. Taken together, our studies characterize two novel consequences of cocaine exposure: (1) decreased neuronal RXR-y expression and down-regulation of RXR-target genes, such as neurogranin, and (2) loss of myelin proteins in the nucleus accumbens which can be attenuated by administration of ceftriaxone. These findings yield insight into mechanisms underlying cocaine-mediated CNS cell death, and highlight potential treatment avenues for restoring brain health. Additionally, as inflammatory processes were identified as key mediators in some of these observations, our findings likely extend to a number of neurodegenerative diseases which are characterized by a neuroinflammatory component.