Assessing English Environment Personality and its Role in Oral Proficiency 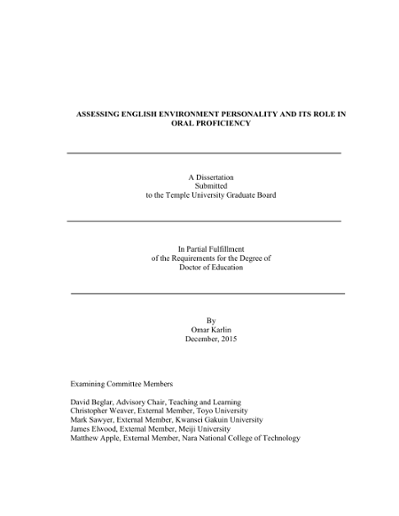 The general areas of research for this study are personality and second language acquisition. The three goals of this study are to (a) develop a personality instrument (the Questionnaire of English Environment Personality [QuEEP]) that accounts for second language influences on personality, and more effectively captures personality than an established personality instrument (the International Personality Item Pool Big Five Factor Markers [IPIP BFFM]), (b) determine if personality changes after studying abroad for a month, and (c) determine if certain personality types are likely to improve oral proficiency when studying abroad. In relation to the study’s first goal, 262-items, using a five-point Likert scale, were created and administered to 287 Japanese university students to measure five personality factors based on the extraversion, emotional stability, openness, agreeableness, and conscientiousness factors of the Big Five model of personality (McCrae & Costa, 1987). These items were then culled to 50 items by examining their suitability through factor analysis and Rasch analysis. Two 50-item versions of the QuEEP were drawn from the same 262-items, one based on three factor analyses, and the other based on Rasch analysis. Both versions of the QuEEP included 10 items for each of the five personality factors in the Big Five. Both versions of the QuEEP outperformed the IPIP BFFM on four measures of validity, including content validity, structural validity, external validity, and generalizability, while the IPIP BFFM outperformed both versions of the QuEEP on the substantive aspect of construct validity. As a result, it was concluded that the QuEEP, specifically the version derived from the Rasch analysis, was more effective at capturing personality that was influenced by a second language than the IPIP BFFM. In relation to the study’s second goal, the personality for 38 study-abroad students was assessed, through a pre-departure and post-return administration of the QuEEP and IPIP BFFM, to determine if the participants’ personality changed after one month abroad. The results indicated that the personality measures of extraversion and emotional stability increased significantly after one month abroad, as measured by the QuEEP. The IPIP BFFM did not indicate any significant personality changes. In relation to the study’s third goal, the 38 study-abroad students also completed a pre-departure and post-return interview test to determine if certain personality types benefited more from studying abroad in terms of oral proficiency, which included eight measures of fluency, complexity, and accuracy. The results indicated that when the participants were divided into high and low groups for each personality dimension (e.g., a high extraversion and a low extraversion group), the only significant differences between the groups in measures of oral proficiency involved the pauses fluency variable (low QuEEP emotional stability group), the words per second fluency variable (high IPIP BFFM extraversion group), the pauses fluency variable (high IPIP BFFM extraversion group), and the accuracy variable (low IPIP BFFM openness group). After Bonferroni adjustments were conducted, these findings were rendered not significant. However, when analyzed cross-sectionally rather than longitudinally, there were several significant correlations involving the QuEEP pretest and pre-interview test data, most notably between oral proficiency and extraversion and emotional stability. The IPIP BFFM posttest also indicated significant correlations between oral proficiency and agreeableness and openness. The QuEEP posttest and post-interview test data, and the IPIP BFFM pretest and pre-interview test data indicated fewer significant correlations with oral proficiency.