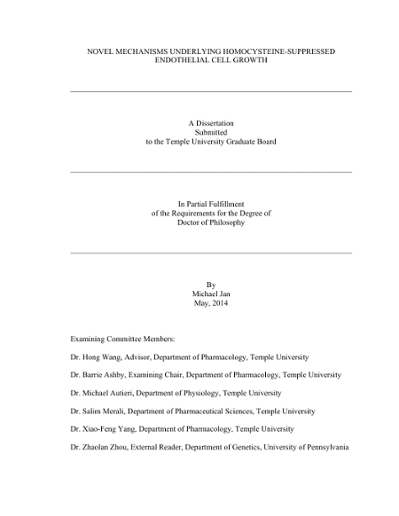 Cardiovascular disease (CVD) is the leading cause of death worldwide, and is projected to remain so for at least the next decade. Ever since its discovery in the urine and blood of children with inborn errors of metabolism, homocysteine (Hcy) at elevated plasma concentrations has been associated with CVD clinically and epidemiologically. Observational studies and meta-analyses have noted that changes in plasma Hcy by 5&mu;M increase the odds ratio of developing coronary artery disease by 1.6-1.8 among other CVD. Clinical trials aimed at reducing plasma Hcy for benefit against development of subsequent cardiovascular events have had unconvincing results, but have moreover failed to address the mechanisms by which Hcy contributes to CVD. Recommendations from national agencies like the American Heart Association and the United States Preventive Services Task Force emphasize primordial prevention as a way to combat CVD. Reducing plasma Hcy as secondary and primary interventions does not fulfill this recommendation. In order to best understand the role of Hcy in CVD, an investigation into its mechanisms of action must be undertaken before measures of primordial prevention can be devised. Numerous experimental studies in the literature identify vascular endothelium as a target for the pathological effects of Hcy. Endothelial injury and impairment are contributory processes to atherosclerosis, and Hcy has been demonstrated to inhibit endothelial cell (EC) growth and proliferation through mechanisms involving cell cycle arrest, oxidative stress, and programmed cell death in vitro. Animal models have also confirmed that high levels of Hcy accelerate atherosclerotic plaque development and lead to impairment of vascular reendothelialization following injury. Hcy has been shown to have the opposite effect in vascular smooth muscle cells (SMC), causing their proliferation and again contributing to atherosclerosis. The cell-type specificity of Hcy remains to be understood, and among the aims of this research was to further characterize the effects of Hcy in EC. The overarching goal was discovery in order to direct future investigations of Hcy-mediated pathology. To begin, the first investigation considered the transcriptional and regulatory milieu in EC following exposure to Hcy. High-throughput screening using microarrays determined the effect of Hcy on 26,890 mRNA and 1,801 miRNA. Two different in vitro models of hyperhomocysteinemia (HHcy) were considered in this analysis. The first used a high dose of 500µ Hcy to mimic plasma concentrations of patients wherein the transsulfuration pathway of Hcy metabolism is impaired as in inborn cystathionine-ß-synthase deficiency. The other set of conditions used 50µ Hcy in the presence of adenosine to approximate impairment of the remethylation pathway of Hcy metabolism wherein s-adenosylhomocysteine accumulates, thus inhibiting s-adenosylmethionine formation and methylation reactions. These distinctions are important because most clinical trials do not distinguish between causes of HHcy, thereby ignoring the specific derangements underlying HHcy. mRNA and miRNA expression changes for both sets of treatment conditions identified CVD as a common network of Hcy-mediated pathology in EC. Moreover, methylation-specific conditions identified cell cycle modulation as a major contributory mechanism for this pathology, which agrees with recent findings in the literature. Analysis of significant mRNA changes and significant miRNA changes independently identified roles for Hcy in CVD and cell cycle regulation, thereby suggesting that miRNA may mediate the effects of Hcy in addition to gene expression changes alone. To investigate the role of Hcy in the cell cycle further, the next set of investigations considered the effect of Hcy under conditions approximating impaired remethylation in early cell cycle events. Previous studies have demonstrated that Hcy inhibits cyclin A transcription in EC via demethylation of its promoter. Conversely, Hcy induces cyclin A expression in SMC, again making the case for a cell type-specific mechanism in EC. Preceding cyclin A transcription and activation, canonical events in the early cell cycle include D-type cyclin activation, retinoblastoma protein (pRB) phosphorylation, and transcription factor E2F1 activation. In a series of in vitro experiments on EC, it was seen that Hcy inhibits expression of cyclin D2 and cyclin D3, but not cyclin D1. Next, pRB phosphorylation was seen to be decreased following treatment with Hcy. This also led to decreased E2F1 expression. However, this series of events could be reversed with E2F1 supplementation, allowing the cell cycle to proceed. As Hcy exerts a number of its effects via regulation of gene transcription, a final series of investigations aimed to predict potential targets of Hcy by examining patterns of transcription factor binding among known targets of Hcy regulation. Gene promoters of Hcy-modulated genes were analyzed in order to determine common transcription factors that potentially control their regulation. The locations of CpG-rich regions in promoters were identified to determine which regions would be most susceptible to regulation by DNA methylation. Next, high-throughput next-generation sequencing (NGS) and bisulfite NGS was performed for DNA from EC treated with Hcy in order to determine methylation changes after Hcy treatment. A number of potential transcription factors and their binding sites were identified as potential mediators of Hcy-mediated gene regulation. Taken together, these investigations represent an exploration of Hcy-mediated pathology in CVD, by focusing upon novel regulatory mechanisms in EC. Objective high-throughput arrays identified roles for Hcy in CVD and cell cycle pathways regulated by miRNA and gene expression, which were confirmed experimentally in vitro. These observations led to an investigation and identification of common transcription factors that potentially regulate Hcy-altered gene expression. This framework may be used to guide future investigations into the complex pathological network mediating the effects of Hcy in CVD. First, identification of a role for miRNA in mediating the effects of Hcy represents a novel regulatory mechanism, heretofore largely unexplored. Next, expanding the role of Hcy in EC cell cycle regulation to identify upstream mediators greatly adds to the published literature. Finally, noting that these changes center upon transcriptional and post-transcriptional regulation gives import to developing methods to characterize promoter and transcription factor regulation. The investigations presented herein and their results provide evidence that the future of Hcy research is vibrant, relevant, and not nearly surfeit.