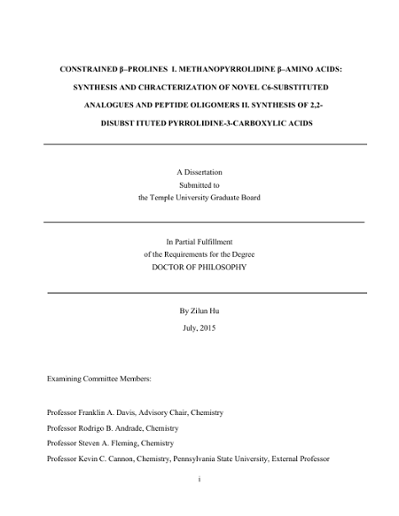 In the study of structurally restricted cyclic β-amino acids and peptides, methanopyrrolidine-5-carboxylic acids (MetPyr-5-acids), or 5-syn-carboxy-2-azabicyclo[2.1.1] hexanes, and derivatives were investigated. MetPyr-5-acids are a series of highly conformationally constrained β-proline derivatives, which belong to a novel category of β-amino acids utilized as building blocks for the synthesis of β-peptides. These β-peptides lack the backbone hydrogen bonds necessary for folding in the usual manner. Substituents and functional groups in this ring system were envisioned to impact the folding properties and functionalities of the corresponding β-peptides. In the present study, the analogues of MetPyr-5-acids with C6- substitutions were prepared, and the folding properties of their peptides were explored. To introduce different functionalities at C6 in MetPyr-5-acids, 6-syn-hydroxymethyl substituted derivatives were synthesized and were used as key intermediates. In the synthesis of this core structure, the major steps in their preparation included the Michael addition of benzyloxymethyl allyl amine to 3-butynone, followed by UV light irradiation of the diene to afford 5-acetyl-6-benzyloxymethyl-2-azabicyclo[2.1.1]hexane. Haloform (Br2/NaOH) oxidation of the acetyl group leads to the 6-substituted MetPyr-5-acid. Resolution of the racemate was achieved either by resolving (±)-6-syn-benzyloxymethyl-MetPyr-5-acid via a classical crystallization resolution method using (S)-(-)-α-methylbenzylamine, or by chiral preparative HPLC separation of (±)-6-syn-benzyloxymethyl-MetPyr-5-acid methyl ester. The absolute stereochemistry was confirmed by X-ray crystallography of a derivative. Novel analogs with a range of functionalities incorporated at the C6 position in MetPyr-5-acid were synthesized from 6-syn-hydroxymethyl-MetPyr-5-acid methyl ester, and include hydrophilic groups such as hydroxyl, amino, methyl ether, and hydrophobic groups, such as substituted phenyl groups and triazole. From the protected C6-substituted analogs of MetPyr-5-acids, peptide oligomers of C6-benzyloxymethyl-2,4-methanopyrrolidine-b-amino acid were prepared up to the length of octomer in high yields. This series of oligomers were characterized by circular dichroism (CD) and indicated enhanced order of folding uniformity for the tetramer and up, with increasing ordered folding for longer oligomers. The octomer exhibited minimal solvent effects, and was stable with increasing temperature up to 80 °C. Analysis by NMR of the iso-butyric amide capped monomer indicated a mixture of cis/trans conformation favoring the cis conformation. This was slightly different from the C6 unsubstituted iso-butyric amide derivative, which favored the trans conformation. For the dipeptide, the C6-benzyloxymethyl substitution increased the percentage of cis conformation of the dipeptide amide bond, but the major peptide had the trans conformation. This demonstrated that C6 substitutions could shift the cis/trans equilibrium towards the cis conformation. Longer oligomers showed ordered secondary folding structure as demonstrated by the increase in ellipticity per amino acid unit, but was too complicated to be determined by NMR analysis. Both the CD patterns and molecular model calculation predicted that the longer oligomers (tetramer and above) favor the trans conformation. This preference was driven by the backbone dipole effect. II. SYNTHESIS OF 2,2-DISUBSTITUTED PYRROLIDINE-3-CARBOXYLIC ACIDS Due to the perceived steric influence of 2,2-disubstitution in the pyrrolidine-3-carboxylic acid, it is believed that the adjacent amide/peptide bonds should result in a trans amide bond conformation. Because of the difficulty in introducing disubstitution at the hindered C2 position, the synthesis of such derivatives has not been successful. For this reason a new method was introduced to prepare novel derivatives, at the N- and C- termini of protected 2,2-dimethyl pyrrolidine-3-carboxylic acid, i.e., benzyloxycarbonyl protected 2,2-dimethylpyrrolidine-3-carboxylate. This procedure included the Michael addition of 2-nitropropane to dimethyl fumarate, followed by ring closure of the amino ester derived from reduction of the nitro ester providing the pyrrolidinone. Reduction of the pyrrolidinone to the pyrrolidine with borane finished 2,2-dimethylpyrrolidine-3-carboxylate in moderate overall yield. A preliminary set of two amides, iso-butyric amide and 3,5-dichlorobenzamide of this 2,2-dimethylpyrrolidine-3-carboxylate, were also prepared. NMR analysis of this pyrrolidine derivative suggested the amide bonds adopted the trans conformation. It was concluded that steric bulk of the 2,2-disubstitution favorably influenced the trans amide conformation. This demonstrated that trans amide conformation control of a β-proline amide was possible.