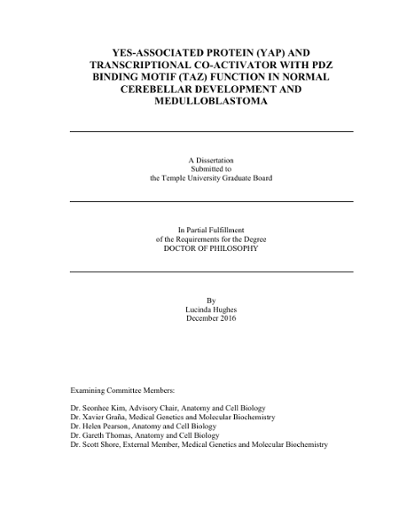 The Hippo signaling pathway was first discovered in Drosophila melanogaster and is involved in organ size control by regulating cell proliferation and apoptosis. This well conserved pathway is activated by various signal inputs, including cell-cell contact, mechanotransduction, and G-protein coupled receptors, with signals converging on the downstream effector protein Yap and its homologue Taz, which are transcriptional co-activators. When the Hippo pathway is activated, Yap/Taz are phosphorylated, leading to cytoplasmic retention and degradation, and diminishing their transcriptional activity. Yap has also been recently implicated as a potential oncogene, as it is upregulated and transcriptionally active in several tumor types. Furthermore, inhibiting Yap activity in various cancer models has been shown to revert cancer cells to a normal phenotype. Although the role of Yap has been described in several organ systems, there is a paucity of information about the function of Yap in the central nervous system. I investigated the function of Yap/Taz in the murine cerebellum to determine its significance during normal development and a potential role for Yap/Taz in medulloblastoma, a tumor that arises in the cerebellum. In Chapter 2, I describe the expression pattern of Yap from embryonic through adult stages in mice, and demonstrate the functional significance of Yap/Taz in different cell populations using conditional knockout mouse models. I show that Yap plays a significant role in cell fate determination as well as in cerebellar foliation: Yap is highly expressed in the ventricular zone and is required for the proper formation of ependymal cells, and is also strongly expressed in Bergmann glia (BG) during early developmental stages, where Yap, together with Taz, plays a significant role in cerebellar foliation. Furthermore, Yap/Taz-deficient BG exhibit migrational defects, as their cell bodies can be found mislocalized to the molecular layer (ML), rather than remaining tightly associated with Purkinje Cells (PCs) in the PC layer. BG support the health of PCs, and severely defective BG positioning eventually leads to a loss of PCs. However, although Yap is highly expressed in granule neuron progenitors (GNPs) during the rapid postnatal expansion stage, it does not appear to play a major role in proliferation of these cells as conditionally knocking-out Yap/Taz in GNPs does not alter their proliferative capacity. Our observations demonstrate that in the cerebellum, Yap has a novel function in glia that is required for the development of normal foliation and organization, but plays a minimal role in GNP proliferation. Importantly, I also show that the reduction of sphingosine-1-phosphate G-protein-coupled receptor (S1P1) signal transduction activates the upstream kinase Lats with concomitant increases of phosphorylated Yap as well as a reduction of the known Yap target connective tissue growth factor (CTGF). This study identifies a novel function of Yap/Taz in cerebellar glia that is required for the development of normal foliation and laminar organization with sphingosine-1-phosphate (S1P) signaling as a potential extracellular cue regulating Yap activity during cerebellar development. In Chapter 3, I present further support for the finding that Yap/Taz are not required for GNP proliferation in vivo by discussing the failure of Yap/Taz loss to rescue the Sonic-hedgehog (Shh) mediated medulloblastoma phenotype, in which GNPs are considered to be the tumor cell of origin. Furthermore, I provide evidence suggestive of a tumor suppressive function of Yap/Taz in the cerebellum. Together, previously unknown functions of Yap in the developing and malignant cerebellum are described, providing a foundation for future studies of Yap in the central nervous system (CNS).