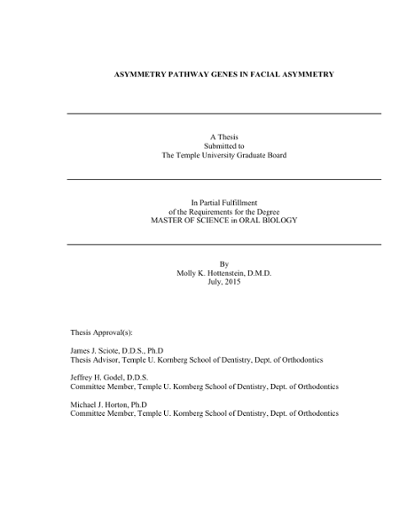 Symmetry is considered an attractive facial characteristic, though it is very rare as most humans have some degree of asymmetry. Though most cases are subtle enough to go undetected, more severe cases of asymmetry can result in marked facial deformity. It has been found that facial asymmetry presents as a comorbid condition with other severe malocclusions. While many causes of facial asymmetry have been thoroughly investigated, such as cleft lip/palate, unilateral craniosynostosis and hemifacial microsomia, the genetic cause of asymmetries associated with dentofacial malocclusions has yet to be investigated. Studies have shown that muscle strength, size, and fiber type can influence bone size and density. The masseter muscle is frequently involved in development of sagittal malocclusion, and left/right fiber-type differences have been previously found in subjects with facial asymmetry. Still, the contribution of muscle function to the development of facial asymmetry is unclear. Symmetry is a genetically controlled human characteristic, as is the careful breaking of symmetry during development to allow for appropriate organ formation necessary for life. Many genes have been identified to play a role in this initial breaking of symmetry, as well as the maintenance of left-right differential expression. Among these genes, the Nodal Pathway plays a particularly important role. Expression of Nodal Signaling Pathway (NSP) genes, which provide positional and patterning information during embryogenesis, vary significantly in facial asymmetry subjects. PITX2, a downstream NSP effector, patterns changes in gene expression on left-right sides through gradient density signaling. PITX2 is reportedly expressed in adult human skeletal muscle satellite cells suggesting NSP gene activity is a key factor in both development and maintenance of facial asymmetry in adulthood. A human transcript microarray was used to evaluate whether these genes involved with normal coding of symmetry during development were differentially expressed in masseter muscle from patients with or without facial asymmetry. This study evaluated orthognathic surgery patients with varying skeletal malocclusions. The patients were categorized based on vertical, transverse, and sagittal discrepancies, as well as the presence or absence of facial asymmetry (n= 93). The subjects were appropriately diagnosed as open or deep bite, class I, II, or III, and treatments planned for the appropriate surgical correction. All of the patients required bimaxillary sagittal split osteotomy, at which point masseter muscle samples were collected. Eleven patients were included in this study. Of the eleven, two of the patients were classified with facial asymmetry. Samples were disrupted in QIAzol Lysis Reagent, RNA was isolated using a Qiagen miRNeasy Mini Kit according to the manufacturer’s instructions, and quality of the total RNA was tested by Agilent Bioanalyzer and Nanodrop spectrophotometry. Samples were used for quantitative Reverse Transcriptase Polymerase Chain Reaction (RT-PCR) and protocols for microarray analysis were conducted as described in the Ambion WT Expression Manual and the Affymetrix GeneChip Expression Analysis Technical Manual. The eleven samples were analyzed by Principal Components Analysis (PCA) to detect fold-changes for each transcript. From this, differences in global gene expression between the two asymmetric and eight remaining subjects were evident, as the two asymmetric patients clustered separately from the malocclusion patients without asymmetry. To find differentially expressed transcripts step-up t-tests were performed to correct for false discovery rate (FDR) comparing the two asymmetric samples to the eight symmetric samples. Differences were considered significant if step-up p-values were ±2 between groups. Differential gene expression was confirmed with ten of the 22 Nodal Pathway genes in asymmetric patients. Extracellular mediators Nodal and Lefty expression was 1.39 and 1.84 fold greater (P&lt; 3.41 x 10-5) whereas integral membrane Nodal-modulators NOMO1,2,3 were -5.63 to -5.81 (P &lt; 3.05 x 10-4) less in asymmetric subjects. Two of the three Nodal Pathway mediators decreased significantly with negative fold differences (-7.02, -2.47; P &lt; 0.003). PPM1a, one of the two negative intracellular mediators, had a significantly decreased fold difference of -3.79 with asymmetry (P , 4.59 x 10-6). PITX2, an asymmetry factor known to influence the size of type II skeletal muscle fibers in adults was also decreased in facial asymmetry (P&lt; 0.05). The down regulation of Nodal Pathway genes suggests its involvement in development of asymmetry. PITX2 expression differences also contribute to skeletal and muscle development in this condition. The overall data trend was for moderate to large decreases in gene expression for approximately 60% of the Nodal pathway genes. Further histological analysis of masticatory muscle fiber types will be necessary to determine how variations in bilateral masticatory muscle phenotype contribute to jaw asymmetry in subjects with posterior facial asymmetry. Finally, the methods used in this study should be conducted with a larger sample population, including a wider variety of different types of asymmetry.