INTERACTIONS OF ENTEROBACTIN AND RELATED MOLECULES WITH TITANIUM(IV): CHARACTERIZATION AND CONSEQUENCES OF AVID BINDING 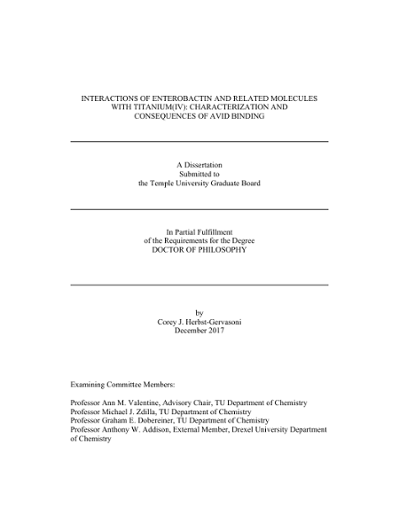 The water solubility of transition metals constrain their use in the bioinorganic chemistry of organisms. Iron(III) is one of the most sought-after metals by organisms; however, it has poor solubility in water at physiological pH. Prior to the great oxidation event (GOE) 2.4 billion years ago, iron was more bioavailable in the 2+ oxidation state. This higher water solubility sustained a greater supply of iron to organisms that required it. Since the GOE and the oxidation of Fe(II) to Fe(III), organisms have been evolving methods to sequester iron from the environment. One method to obtain iron is through the use of low molecular weight molecules called siderophores which solubilize Fe(III) from their environment through chelation. The strongest siderophore to date is enterobactin (ent) which forms a Fe-ent complex with an association constant of 1049. While iron is utilized by most organisms, titanium is also a bioactive metal. Titanium is second to iron in abundance of transition metals in the Earth’s crust and is becoming increasingly relevant in medicine, technology, and commercial goods. Titanium(IV) (the most common oxidation state of titanium) also has a larger charge to size ratio than Fe(III) and may outcompete iron for binding. The already high abundance and increasing usage of titanium in the developed world leads to possible undocumented interactions between titanium and siderophores. In an attempt to address the natural selection of the chemical elements during bioinorganic evolution, the solution interactions of Ti(III), Ti(IV), Fe(II), and Zn(II) with sulfide in a solution mimicking the sulfidic early ocean were explored. Anaerobic metal solutions were added to solutions with ocean-mimicking salts, acetic acid buffer, and increasing concentrations of sodium sulfide. After equilibration, the soluble metal ion concentrations were measured using ICP-OES. Catechol ligands are important bioinorganic chelators. The synthesis and crystallization of the disodium, dilithium, and diammonium salts of the model catechol ligand 4,5-dihydroxy-1,3-benzenedisulfonate (tiron) are described. The dilithium and diammonium salts were synthesized from the disodium tiron salt by cation metathesis. The crystals were obtained by solvent evaporation in either alcohols or water. Crystal structures were acquired, solved, and analyzed revealing inter- and intramolecular interactions in the dication tiron crystal structures. The synthesis of the siderophore enterobactin (ent) was improved upon from published methods to increase purity. Following the synthesis of ent, spectrophotometric techniques were used to analyze Ti-ent complex stability. Spectrophotometric titrations were carried out from p[H] 2-12 revealed that the fully catecholate bound [Ti(ent)]2- complex was the only species in the p[H] range 2-9. Above a p[H] value of 9 the trilactone backbone apparently hydrolyzed. This result indicates that protons cannot outcompete Ti(IV) binding at low p[H] and hydroxide cannot outcompete ent for binding to Ti(IV) at high p[H]. Using various Ti(IV)-ligand complexes, the log b110 for Ti-ent was probed at pH 6. The complex [Ti(DFOB)]+ (log b110 = 38.1) with 1,000 fold excess desferrioxamine B (DFOB) was unable to compete with ent and every addition of ent lead to the formation of [Ti(ent)]2- yielding a lower limit log b110 of 52.9. The catecholate ligand tiron was used in a 4,000:1 ratio of tiron:Ti(IV) forming [Ti(tiron)3]8- (log b130 = 57.6) to attempt to compete with ent. This yielded a lower limit log b110 for [Ti(ent)]2- of 61.2. Kinetic studies of titanium sequestration from titanium containing species was also investigated. Using Ti(IV) complexes such as [Ti(DFOB)]+, [Ti(citrate)3]8-, and the titanium complex of human serum transferrin (Ti2HsTf) as the Ti(IV) source, the rate of titanium sequestration by ent was probed. Taken together, these findings indicate that ent is a strong binder of Ti(IV); however, it binds relatively slowly. Strong binding ligands are able to coordinate and dissolve metal ions from the surface of metal oxides. Titanium mostly exists in the solid oxide form in the Earth’s crust, thus solubilization of these oxides may be important for Ti(IV) incorporation into an organism. To determine the effects of ent in solution at a TiO2 interface, 50 mM ent was added to a series of suspensions of TiO2 at pH 5 ± 0.5 with different loadings for 176 h. The [Ti]max for all anatase trials averaged to be approximately 20 – 25 mM indicating 40 – 50% ent efficacy for TiO2 dissolution. This value was compared to previously reported TiO2 dissolution by 2 mM DFOB at pH 2 as well as dissolution of 50 mM and 150 mM DFOB and tiron, respectively, at pH 5 ± 0.5. Surface interactions between ent and anatase were probed using ATR-IR. One extension of this work related to the avid Fe(III) ligand deferasirox (DSX). DSX is an orally administered chelator for Fe(III) overload. A Ti(IV)-DSX complex may be useful as an anticancer drug. The solution chemistry of DSX with Ti(IV) was characterized utilizing spectrophotometric and mass spectrometric techniques. A series of titrations with Ti(IV) and DSX from pH 6.7-11.2 revealed two distinct species. Additions of [Ti(HDSX)(DSX)]- to bovine serum albumin (BSA) indicated that the [Ti(HDSX)(DSX)]- complex binds to BSA. This transfer is possibly an important step in the efficacy of Ti(IV) anticancer drugs and may relate to the possible mechanism for Ti(IV) delivery into cancerous cells.