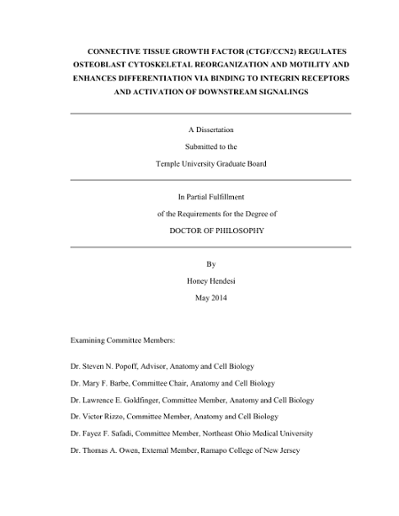 Connective Tissue Growth Factor (CTGF) is a matricellular protein that has been shown to mediate cell adhesion, and as a consequence, it regulates cell proliferation, migration, differentiation and gene transcription. Although previous in vivo and in vitro studies supported the anabolic role of CTGF in skeletogenesis, to date mechanisms of this effect remain unknown. So far, no specific receptor has been identified for CTGF, although previous studies have shown that integrins can serve as functional signaling receptors for CTGF. The CTGF-integrin interaction initiates intracellular signaling cascades that ultimately regulate cell cytoskeleton reorganization, gene transcription and cell function. To study the effect of CTGF on osteoblasts, we first conducted adhesion assays using the MC3T3-E1 osteoblastic cell line. We confirmed that osteoblasts adhere to rCTGF in a concentration-dependent manner and we showed this adhesion has characteristics of integrin mediated adhesions. Next, we used an array of blocking antibodies directed against the individual alpha and beta; integrin subunits that are known to be expressed in osteoblasts. Significant decreases in cell adhesion were observed upon treatment with anti-alpha-v or anti-beta1 blocking antibodies. Subsequent coimmunoprecipitation analyses demonstrated that CTGF interacts with alpha-v and beta1 integrins in osteoblasts. Furthermore, we showed that the specificity of this CTGF-integrin interaction occurs in the C-terminal domain (fourth module) of CTGF. The immunefluorescence staining of cells cultured on substrates of rCTGF, fibronectin (positive control) or BSA (negative control) demonstrated that osteoblast adhesion to rCTGF results in actin cytoskeleton reorganization, focal adhesion formation, enhanced cell spreading and Rac activation. These series of events are necessary for proper cell-matrix interaction and integrins' downstream signaling initiation. Next, through alkaline phosphatase (ALP) staining and activity assays, as well as Alizarin red staining, we demonstrated that osteoblast attachment to CTGF matrix enhances cell maturation, bone nodule formation and matrix mineralization. To investigate whether the effect of CTGF on osteoblast differentiation involves activation of specific signaling molecules, we performed Western blot and chromatin immunoprecipitation (ChIP) assays. Osteoblasts cultured on rCTGF expressed higher levels of both total and phosphorylated forms of focal adhesion kinase (FAK) and extracellular signal-regulated kinase (ERK) compared to the cells cultured on BSA. In addition, these osteoblasts showed an increase in runt-related transcription factor 2 (Runx2) binding to the osteocalcin gene promoter compared to the negative control. These experiments confirmed CTGF's effect on enhancing osteoblast differentiation through regulation of important signaling molecules. In another series of experiments, we used primary osteoblasts isolated from CTGF KO mice, their WT littermates, or WT cells infected to overexpress (OE) CTGF to study the effect of different levels of endogenous CTGF on osteoblast cytoskeleton reorganization and motility. Our assays showed enhanced cell adhesion, spreading and Rac expression in CTGF OE osteoblasts, while in CTGF KO osteoblasts, cell adhesion, spreading and Rac expression were significantly decreased. In contrast, CTGF OE osteoblasts that showed high adhesion and spreading, exhibited diminished cell motility and low levels of RhoA expression, while KO cells migrated quickly and expressed high levels of RhoA. Together, these experiments establish CTGF as an adhesion protein for osteoblasts; they demonstrate that the alpha-v beta1 integrin is a functional signaling receptor for CTGF; they confirm that osteoblast differentiation is enhanced when cultured on CTGF matrix through activation of regulatory signaling molecules; and finally, these experiments establish a role for CTGF in the regulation of small RhoGTPases expression, which in turn implies a significant role for CTGF in cell cytoskeleton reorganization and motility.