Up the Hill with Jack and Jill: The Social Reproduction of Intersectional Communities 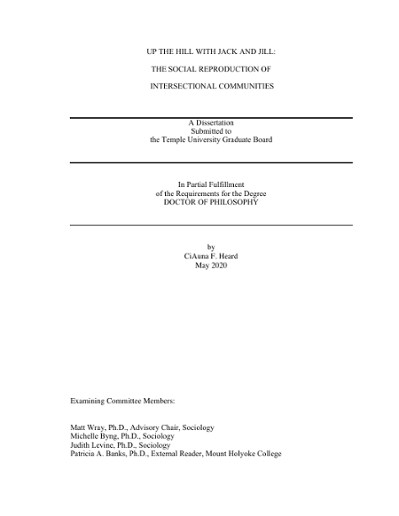 This study is an investigation into the ways that intersectional social actors conceptualize their position as raced, classed, and gendered, and how they seek to pass down identity categories, cultural frames, and behavioral habits to their children. In particular, it is an examination of Jack and Jill of America, Inc. as an intersectional social club, which seeks to socialize upper-middle class black youth into the habits that this community sees as legitimate and productive in modern society. Using interview, archival, and focus group data, this project analyzes the discursive frames of current club members, former child participants, and documentary evidence from historical correspondence. This project seeks to respond to racial formation and social reproduction scholarship by interrogating the ways that parents articulate the meanings of race, class, and gender, the ways such meanings are engaged by Jack and Jill, as a legitimating organization, and the absorption or internalization of such meanings by young people. It asks three questions to examine such mechanisms: 1) How do intersectional social actors talk about race, class and gender? 2) How do such community members engage social reproduction strategies that highlight their unique race and class positions? 3) How do recipients (children) rearticulate those messages and indicate their absorption or rejection of those norms? I find that discourse around race frames blackness as a salient social stigma, despite socioeconomic privilege. Mothers engage race explicitly, having frank discussions about their hopes and fears around their child’s racialized bodies. Therefore, messages about race are illuminated in organizational discourse and are well-absorbed by children. Secondly, the study finds that discourse around class obscures the ways that cultural and social capital is accumulated and activated in the larger social world. While discourses about class are largely silenced, Jack and Jill serves as a location for capital accumulation, developing ease with elite cultural forms, and cultivating dense social networks saturated with resource-rich nodes. Members talk very little about the role of class stratification in their lives. Finally, this project finds that parents articulate gender expectations according to the bimodal demands of black respectability politics. Whether mothers sought to protect children from state violence or sexual derogation is fundamentally tied to their children’s gender. Further, the aspirational desires that they have for children, particularly for children’s future spouse, differed for sons and daughters in marked ways. Ultimately, I argue that the substance of norms around race, class and gender, as well as the processes of socializing such norms and discourses, serve to reproduce this intersectional community over time. Because of their intersectional positionality, discourses about race are saturated with simultaneous messages about gender or class, and vice versa. Not only do mothers perform mastery of such intricate narratives, but though individual work and the efforts of the social club, they enjoy success in socializing these frames into their children. These narratives are more than identification markers; they serve as strategies to minimize the effect of racial stigmatization experienced in their neighborhoods and at work, teaching children the behaviors and codes that are most useful in navigating away from the worst effects of a marginalized position. As the next generation grows up to develop their own native ideological frames, I predict that we will continue to see persistent meanings about racial marginality, socioeconomic privilege, and gender respectability as part of the vocabulary of these intersectional actors. Mastery of these meanings allows individuals access into this private community and also serves as protection from the worst effects of local discrimination.