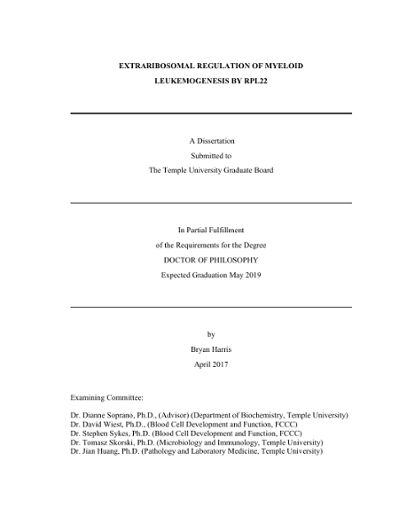 Mutations and deletions in ribosomal proteins are associated with a group of diseases termed ribosomopathies. Collectively, these diseases are characterized by ineffective hematopoiesis, bone marrow failure, and an increased risk of developing myelodysplastic syndrome (MDS) and subsequently acute myeloid leukemia (AML). This observation highlights the role of dysregulation of this class of proteins in the development and progression of myeloid neoplasms. Analysis of gene expression in CD34+ hematopoietic stem cells (HSC) from 183 MDS patients demonstrated that ribosomal protein L22 (Rpl22) expression exhibited a greater reduction than any other ribosomal protein gene in MDS. Interestingly, we observed that AML patients with lower expression of Rpl22 had a significant reduction in their survival (TCGA cohort, N=200, Log Rank P value&lt;0.05). To assess the mechanism of reduced expression, we developed a FISH probe complementary to the RPL22 locus and assessed for deletion of this locus in an independent set of 104 MDS/AML bone marrow samples. Strikingly, we found that RPL22 deletion was enriched in high-risk MDS and secondary AML cases. We, therefore, sought to investigate whether reduced Rpl22 expression played a causal role in leukemogenesis. Using Rpl22-/- mice, we found that Rpl22-deficiency resulted in a constellation of phenotypes resembling MDS. Indeed, Rpl22-deficiency caused a macrocytic reduction in red blood cells, dysplasia in the bone marrow, and an expansion of the early hematopoietic stem and progenitor compartment (HSPC). Since MDS has been described as a disease originating from the stem cell compartment, we next sought to determine if the hematopoietic defects were cell autonomous and resident in Rpl22-/- HSC. Competitive transplantation revealed that Rpl22-/- HSC exhibited pre-leukemic characteristics including effective engraftment, but a failure to give rise to downstream mature blood cell lineages. Importantly, there was a strong myeloid bias in those downstream progeny derived form Rpl22-/- HSC. To determine how Rpl22-deficiency increased the causes these deficiencies in HSC, we performed whole transcriptome analysis on Rpl22-/- HSC. Interestingly, alterations in genes associated with both ribosomal proteins and mitochondrial components were observed. We found that protein synthesis was unchanged in Rpl22-deficient HSCs, sharply contrasting the reductions in global protein synthesis that usually accompany ribosomal protein insufficiency. Consequently, we shifted our focus to the dysregulated mitochondrial genes, which were linked to the processes of oxidative phosphorylation and fatty acid metabolism. We observed that oxidative phosphorylation was decreased in Rpl22-deficient HSCs while fatty acid oxidation was increased. Increased fatty acid oxidation is associated with maintenance of the hematopoietic stem cells. Interestingly, inhibiting fatty acid oxidation mitigated this attribute in Rpl22 deficient HSCs. Because Rpl22 is an RNA-binding protein, we asked if Rpl22 was regulating fatty acid oxidation by directly binding mRNAs encoding regulators of fatty acid oxidation. We found that Rpl22 is able to directly bind the coding region of an upstream regulator of fatty acid oxidation, Alox12. Thus, we hypothesized that Rpl22-deficiency increased fatty acid oxidation through increased expression of Alox12. Consistent with this hypothesis, knockdown of Alox12 impaired the function of Rpl22 deficient HSC. Because the increased fatty acid oxidation promotes self-renewal of Rpl22-deficient HSC and blocks their differentiation, we also hypothesized that this would predispose them to leukemogenesis. We examined the potential for Rpl22-deficient HSPC to be transformed upon ectopic expression of the MLL-AF9 oncogenic fusion. Indeed, Rpl22 deficiency increased predisposition to transformation both in vitro and in vivo, in MLL-AF9 knockin mice. Furthermore, Rpl22 deficient leukemias were preferentially sensitive to pharmacologic inhibition of fatty acid oxidation or Alox12 knockdown, indicating that leukemia cell survival was also dependent upon fatty acid oxidation. Taken together, these findings indicate that Rpl22-insufficiency predisposes HSPC to leukemic transformation and aggressive growth by regulating mitochondrial function, providing an explanation for the reduced survival observed in Rpl22-low AML patients. We also sought to determine how Rpl22 may be contributing to another subset of AML known as Therapy-related AML. Most commonly, these patients develop AML after previously being treated with an alkylating chemotherapeutic drug. Interestingly, we found that Rpl22-deficient HSPC are resistant to treatment with these agents, despite having evidence of DNA damage. The ultimate consequence of the insensitivity of Rpl22-deficient HSPC to alkylating agents was that mice given serial doses of cyclophosphamide exhibited an increased incidence of leukemic-like changes. This chemo-resistant phenotype in Rpl22-/- cells was related to increased expression of the DNA repair protein MGMT. Inhibition of this protein abrogated the ability of these cells to survive following treatment with cyclophosphamide. Ultimately, this study implicates Rpl22 as a regulator of alkylating DNA damage repair and suggests that both patients with hematologic or solid cancers that express reduced levels of Rpl22 are at increased risk for development of therapy related AML is they are treated with alkylating agents.