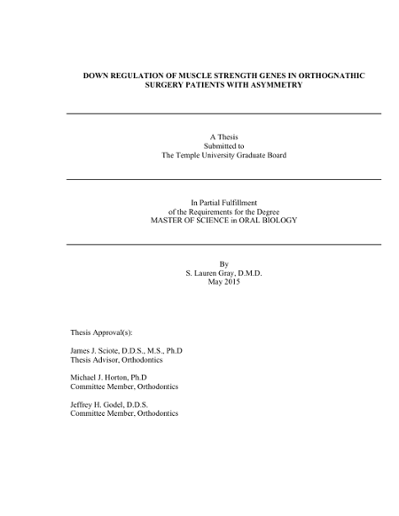 Objective: Genetic loci for ATP2A2 kinase, NUAK1, and phosphatase PPP1CC are associated with skeletal muscle strength phenotypes. ATP2A2 is a calcium ion transport ATPase in sarcoplasmic reticulum that is predominantly expressed in cardiac and slow-twitch fibers. NUAK1, an AMP-activated protein kinase, and PPP1CC, a subunit of protein phosphatase 1, are involved in glycogen metabolism during skeletal muscle contraction. The aim of this study is to investigate whether these genes are associated with masseter muscle composition and function in the development of skeletal malocclusion. Methods: A total of 56 orthognathic surgery patients were classified as having skeletal Class I, Class II, or III sagittal malocclusions with normal, open, or deep bites vertically, with or without facial asymmetry. Masseter muscle samples were collected during the mandibular osteotomies, frozen, and sent to the Kornberg School of Dentistry. Tissue from eleven patients was used for gene expression analysis on Affymetrix HT2.0 microarray chips and a principle components analysis. Then, these plus an additional 45 masseter samples were used for quantitative RT-PCR. Expression data for the three genes of interest were evaluated in the microarray and corroborated and expanded upon with RT-PCR data. ANOVA and unpaired t-tests were performed to determine correlations between ATP2A2, NUAK1, and PPP1CC expression levels and vertical and sagittal malocclusion classifications. Additional ANOVA and unpaired t-tests were performed to determine correlations between ATP2A2 expression level and signs and symptoms of temporomandibular disorder (TMD) with and without pain and facial asymmetry, and relative to the expression levels of a second gene associated with muscle strength phenotypes (ACTN3). Finally, Kendall Tau analyses were performed to compare ATP2A2 expression levels in subjects grouped by malocclusion classification to masseter muscle composition, including mean fiber area (MFA) and mean percent occupancy (MPO) of each fiber type. Results: Principle component analysis revealed two patients with genetic expression levels that deviated from the group. These were the only patients diagnosed with facial asymmetry. Microarray data showed that in these patients ATP2A2 and PPP1CC were significantly decreased. NUAK1 was decreased to a lesser extent. Also, among other genes in the same functional categories, ATP2A1 expression was -30.45 fold (P&lt;6.11X10-6) and PPP3CC expression was -2.96 fold (P&lt;2.03X10-5) in the patients with facial asymmetry. RT-PCR results showed NUAK1 and PPP1CC were differentially expressed at lower, but not statistically significant levels in subjects with craniofacial asymmetry. However, RT-PCR did verify that ATP2A2 expression is down regulated in subjects with mild to severe forms of asymmetry as compared to subjects with facial symmetry (p=0.022). ANOVA and unpaired t-test analyses illustrated that there was no significant differences in ATP2A2 expression in patients with different vertical, saggital, or combined vertical/sagittal malocclusion diagnoses. There was a significant association between the lateral differences in ATP2A2 expression, between right- and left-sided masseter biopsies within the same individual, in subjects with Class III malocclusions with different vertical diagnoses. Here, lateral differences were greatest in open bite, intermediate in deep bite, and lowest in normal Class III subjects. Kendall tau analyses were performed to compare ATP2A2 expression levels and masseter composition (MFA/MPO of type I, hybrid, and type II fibers) in all subjects, subjects with Class II malocclusions, and subjects with Class III malocclusions. Regardless of sagittal malocclusion, all subjects showed a negative correlation with type IIA MPO that was highly significant (r=-0.46; p=0.004). Also, ATP2A2 associations in Class II subjects were positive with type I MFA (r=0.36; p=0.04) and negative with type IIA MPO (r=-0.59; p=0.001). Correlations for Class III subjects were typically negative and not significant. Also, Kendall tau correlations were performed to compare ATP2A2 expression with the composition of each fiber type in patients grouped by both sagittal and vertical malocclusion classification. These found decreased type IIA fiber MPO correlated significantly (p = 0.024) with increased relative ATP2A2 expression in subjects with Class II, normal bite malocclusions (n = 6, R2 = 0.8127). Finally, ATP2A2 expression was not associated with most phenotypic traits exhibited by the surgery subjects such as presence of signs/symptoms of TMD with and without pain and facial asymmetry. However there was an association between decreased lateral differences in ATP2A2 expression in subjects with asymmetry with the TC ACTN3 genotype as compared to subjects with the TC ACTN3 genotype and facial symmetry. Conclusions: ATP2A2 promotes calcium transport in slow twitch and cardiac muscle contraction-relaxation cycling. Decreased expression of this gene in patients with asymmetries suggests that down regulation of the calcium handling capacities of muscle fibers may influence the development of abnormal craniofacial phenotypes. Both NUAK1 and PPP1CC are thought to play metabolic regulatory or responsive roles to muscle contraction. Decreased expression of these genes may accompany alterations of fiber-type form and metabolic properties to adversely affect jaw development. Additionally, ATP2A2 correlations indicate that this calcium channel protein may be important for type I fiber function, but not type IIA in masseter muscle from Class II subjects, suggesting a functional influence on malocclusions. ATP2A2 does not appear to function differentially in fiber types that influence development of Class III malocclusion. Further studies with more subjects are needed to increase experimental power.