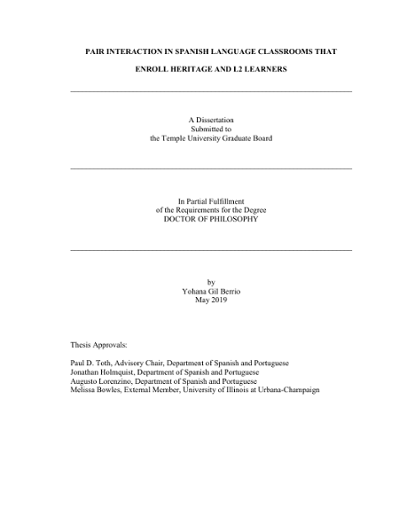 A growing number of studies has shown that collaborative writing tasks facilitate second language (L2) development by providing learners with opportunities to focus their attention on language and to collaborate in the solution of their language-related problems (e.g., Choi & Iwashita, 2016; Storch, 2013; Swain & Lapkin, 1998; Williams, 2012). However, most of these studies have focused almost exclusively on L2 learners, and particularly on English as a second language learners. In an effort to address this gap and drawing from a sociocultural framework, this study investigated the interactions of Spanish heritage language (HL) learners and Spanish L2 learners enrolled in the same class. Twenty-four intermediate-level learners of Spanish, organized in four HL-HL, four HL-L2, and four L2-L2 dyads, participated in the study. As part of their regular class work, they completed four collaborative writing tasks in pairs. Participants were also asked to individually complete a pretest and two posttests. The tasks and tests were intended to elicit the present subjunctive in nominal and adjectival clauses. The interactions between each pair were recorded and coded for the nature of the relationships the learners formed (Storch, 2002) and the quantity and quality of learners’ deliberations about language choice, using Language Related Episodes (LREs) (Swain & Lapkin, 1998) as units of analysis. Results showed that the most common type of patterns of interaction the learners developed was collaboration. Moreover, three pairs displayed a dominant/passive pattern of interaction and two pairs an expert/novice pattern. Results also indicated that overall, participants produced slightly more LREs focused on form than LREs focused on lexis. Furthermore, results showed that whereas all pairs produced morphosyntactic LREs, they were more frequent in HL-L2 dyads. Lexical LREs occurred more often in L2-L2 dyads, and orthographic LREs occurred only in HL-HL dyads. With regards to learning gains, results revealed that six participants obtained high scores in all tests and did not show a score change from pretest to delayed posttest. Five of these participants were identified as HL learners. However, data also showed that 16 participants scored higher on their delayed posttest than they did on their pretest. Overall, considering that most dyads developed a collaborative pattern of interaction and achieved learning gains after task-based interaction, the data suggest that despite the differences in linguistic and cultural backgrounds, learners in mixed and matched pairs provided assistance to one another and produced LREs associated with the target structure. These findings have important pedagogical implications and thus, future studies need to investigate the best practices for teaching HL and L2 learners simultaneously and the types of tasks that encourage collaboration.