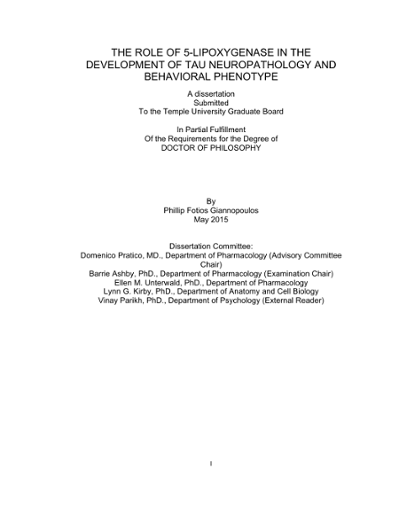 5-Lipoxygenase (5LO) is a lipid-peroxidizing enzyme which inserts molecular oxygen into fatty acids leading to the biosynthesis of leukotrienes. This protein is widely expressed in the brain including the cortex and hippocampus regions, where its levels and activity increase in an age-dependent manner. Previous work has shown that 5LO modulates both amyloid beta (A&#61538;) and tau pathology in Alzheimer's disease (AD) models. However, whether the effect of 5LO on tau is direct or indirect still remains unclear. Tau is a microtubule-associated protein usually found in the axons of neurons where it promotes assembly and stabilization of microtubules. In post-mortem brains of AD patients, tau is hyperphosphorylated and altered conformationally, followed by the formation of intracellular aggregates known as neurofibrillary tangles (NFTs), which are also the major pathological hallmark of another group of neurodegenerative diseases collectively referred to as tauopathies such as Pick's Disease, Progressive Supranuclear Palsy (PSP), Frontotemporal Dementia (FTD) and Parkinsonism linked to chromosome 17. The central hypothesis of the thesis is that 5LO directly influences tau metabolism, the development of related neuropathology and behavioral phenotype. To prove this hypothesis, a comprehensive genetic and pharmacologic experimental approach, combining both in vivo and in vitro experiments, was implemented. We initially showed that human brains from patients with a confirmed diagnosis of PSP, had significantly higher levels of 5LO when compared with brains form healthy controls. Next, we assayed the levels of 5LO in brains from htau (transgenic tau mice) mice at 4 different age time-points and two regions (cortex and cerebellum). Interestingly, compared with wild type controls, cortices from htau mice had a non-significant increase in 5LO protein levels as early as 6 months of age, which became significant by 10 months of age in the cortex only. Taken together, the age-dependent and region-specificity of the 5LO up-regulation supports the hypothesis that this pathway may have a functional role in the development of the tauopathy phenotype. To prove it, we treated tau mice with a selective 5LO inhibitor, zileuton, and explored the effect on learning and memory. Treatment of the htau mice with zileuton restored their short term working memory and spatial memory deficits. Shortly after completion of the behavioral tests, mice were euthanized and brains harvested for biochemistry and immunohistochemistry analyses. In association with the changes in behavior, we observed that pharmacologic inhibition of 5LO had an influence on tau metabolism, more specifically a significant decrease in tau phosphorylation. In search for the molecular mechanism involved in this biological effect, we assayed different kinases and phosphatase which have been implicated in tau metabolism and showed the specific involvement of the cdk5 pathway. This observation was further confirmed by in vitro studies, in which by using primary neuronal cells we showed that zileuton decreased tau phosphorylation via a cdk-5-dependent mechanism. Since the development of tau pathology results in biochemical and functional manifestation of synaptic deficits, next we assessed levels of pre- and post-synaptic protein markers. Compared with wild type, htau mice had significant reduction in the levels of three distinct markers of synaptic integrity (that is synaptophysin, post-synaptic density protein-95 and microtubule associated protein-2). By contrast, the decrease was completely restored to wild type levels by zileuton treatment. To further support the involvement of this pathway in the improvement of the behavioral and cognitive deficits, we explored the effects of its pharmacological blockade on synaptic function by performing electrophysiological studies. As reported previously, there was a significant difference in Long Term Potentiation (LTP) between the wild type and htau mice, with the latter showing significant deficits. However, pharmacologic blockade of 5LO in the htau mice was adequate to restore the LTP responses to a level comparable to those measured in the wild type mice. In the genetic portion of the study, WT and htau pups were intracranially injected with both AAV2/1 control vector and AAV2/1 5LO vector. Compared with the htau control group, the htau mice injected with AAV2/1 5LO displayed a significant deficits in cognition and memory associated with a decline in their synaptic integrity. Also, genetic upregulation of 5LO yielded significant increases in tau phosphorylation associated with an increase in cdk-5 kinase activation both in vivo and in vitro. Taken together these results describe a pluripotent role for 5LO in the context of tauopathy by representing its direct functional role in modulating behavior along with tau phosphorylation, neuroinflammation and synaptic function in a relevant mouse model of the human disease. The demonstration of the pleiotropic role 5LO in tauopathy pathogenesis makes it not only a valid pharmacological target, as 5LO inhibitors are already FDA approved but, more importantly represents a unique therapeutic opportunity with true disease modifying potential for the treatment of these dementing disorders for which there is no cure.