The Birth of a Haunted "Asylum": Public Memory and Community Storytelling 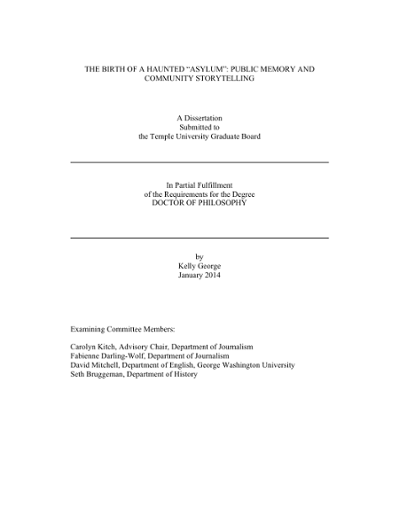 Public memory of "the Asylum" in contemporary American culture is communicated through a host of popular forms, including horror-themed entertainment such as haunted attractions. Such representations have drawn criticism from disability advocates on the basis that they perpetuate stereotypes and inaccurately represent the history of deinstitutionalization in the United States. In 2010, when Pennhurst State School and Hospital, a closed Pennsylvania institution that housed people understood as developmentally/intellectually disabled, was reused as a haunted attraction called "Pennhurst Asylum," it sparked a public debate and became an occasion for storytelling about what Pennhurst meant to the surrounding community. I apply theoretical perspectives from memory studies and disability studies to the case of "Pennhurst Asylum" in order to understand what is at stake when we remember institutional spaces such as Pennhurst. More specifically, this case study uses narrative analysis of news stories and reader letters, ethnographic observation at the haunted attraction, interviews with key storymakers, and historical/cultural contextualization to examine why this memory matters to disability advocates, former institutional residents and employees, journalists, and other community members. The narrative patterns I identify have ramifications for contemporary disability politics, the role of public communication in the formation of community memory, and scholarly debates over how to approach popular representations of historical trauma. I find that Pennhurst memory fits within contemporary patterns in the narrative, visual, and physical reuse of institutional spaces in the United States, which include redevelopment, memorialization, digital and crowd-sourced memory, amateur photography, Hollywood films, paranormal cable television shows, and tourism. Further, this reuse of institutional spaces has been an occasion for local journalists to take on the role of public historian in the absence of other available authorities. In this case study, the local newspaper (The Mercury) became a space where processes of commemoration could unfold through narrative--and, it created a record of this process that could inform future public history projects on institutionalization in the United States. In the terms of cultural geographer Kenneth Foote (1997), disability advocates attempted to achieve "sanctification" of the Pennhurst property by telling the story of its closure as a symbol of social progress that led to the community-based living movement. Paradoxically, since this version of the Pennhurst story relied on a narrow characterization of Pennhurst as a site of horrific abuse and neglect, it had this in common with the legend perpetuated by the haunted attraction. In contrast, other community members shared memories that showed Pennhurst had long been a symbol of the community's goodwill, service, and genuine caring. In short, public memory of Pennhurst in 2010 was controversial, in part, because the institution's closing in 1987 had itself been controversial. Many still believed it should never have been closed and were thus resistant to the idea of sanctifying its story as an example for future change. When the State abandoned the Pennhurst campus, it left an authority vacuum at a site about which there was still as much public curiosity as there had been when it first opened in 1908. Indeed, this easily claimed authority is part of what "Pennhurst Asylum" is selling. Its mix of fact and fiction offers visitors the pleasure of uncertainty and active detective work--something usually missing at traditional historic sites. Visitors get to touch a mostly unspecified, but nonetheless "real" past mediated by an abundance of historical and contemporary public communication that all attach an aura to Pennhurst as a place where horrific events happened. Rather than suggesting historical amnesia, the strategic fictionalizations made to create the Pennhurst legend show exactly what is remembered about "the Asylum." The legend distances the story away from American history and sets it in a deeper past beyond most living memory. From my observation at the haunted attraction, it appears that the problem isn't that the American public has forgotten "the Asylum"; it may be that we remember too well. Overall, the relationship between institutions and their communities is one of intractable complicity, ensuring that the public memory of "the Asylum" will continue to be deeply fraught. News archives show that for decades local newspapers reported on adverse events at Pennhurst including fire, disease outbreak, accidental death, violence, criminal activity, and a series of State and Federal probes into mismanagement and abuse. This is especially significant because the power structures that allowed the institution to function remain mostly intact. Indeed, the "Pennhurst Asylum" relies not only on our previous knowledge of Pennhurst and the mythic figure of "the Asylum;" it also relies on our fear of medical authority, bodily difference, and most of all, our collective vulnerability to the social mechanisms that continue to define and separate the "normal" and the "abnormal." Even among disability advocates, the act of remembering threatens to recreate the hierarchy of the institution. Some of the same people who had authority at Pennhurst continue to have the authority to tell its story today. Finally, the usefulness of the ghost story as a memory genre reflects both rapid change and surprising stagnation in the role of institutionalization in the United States.