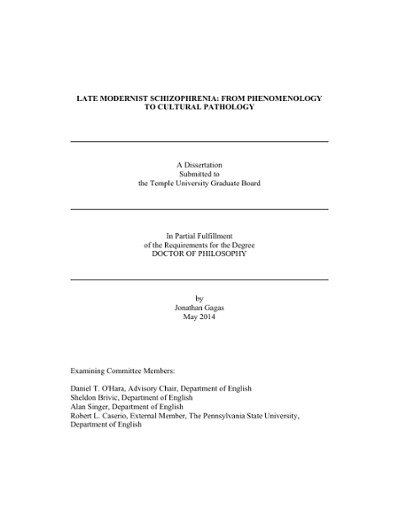 My dissertation demonstrates how representations of schizophrenic characters in novels can combat widespread misuses of psychiatric terms and help readers empathize with mentally ill people if we read these novels with some understanding of psychiatry and the psychoanalysis that influenced them. I undertake a critical genealogy of the schizophrenia concept's migration from the mental health professions to fiction, concentrating on the period from the German invasion of Paris in June 1940 to the events of May 1968, with some attention to contemporary uses of the schizophrenia concept by cultural theorists. Experimental novelists writing during the apogee and aftermath of National Socialism from the 1940s to the 1970s represent schizophrenia as they understood it to express the painful emotions produced by World War II's challenge to the value of experimental writing. In the postwar fiction of Samuel Beckett (1906-1989) and Georges Perec (1936-1982), imitating schizophrenia results in careful disclosures of disintegrating life-worlds: in Beckett's case, the dissolution of the James Joyce circle and the communities of modernist exiles it exemplified, which the German invasion of Paris destroyed; in Perec's case, the deaths of his parents in the defense of France and the Holocaust, and the annihilated six million Jews including his mother. Reading Beckett and Perec's novels develops readers' abilities to empathize with both schizophrenic people and the loved ones of Holocaust victims. While those who avoided the concentration camps like Perec did not experience their horrors firsthand, losing relatives and other loved ones transformed their lives, just as losing two thirds of its Jewish population devastated European culture despite reticence to acknowledge the Holocaust's monstrous effects in the postwar years. Late modernist fiction can thus both help readers understand the Holocaust's cultural impact and foster the skills necessary to understand experiences of severe mental disorder. Such empathic understanding is more humane than romanticizing or stigmatizing schizophrenia or other mental illnesses, and it helps us register the Holocaust's degradation of humanity anew rather than walling off this event in the past or regarding it solely as a Jewish issue. Late modernist fiction provides a more precise, caring alternative to the romanticizing/stigmatizing binary perpetuated by postwar cultural theorists because, from the 1930s to the 1970s, the fiction gradually transitions from reinforcing that binary to enabling empathy for traumatized and mentally ill people. Such fiction anticipated recent phenomenologies of schizophrenia - real experiences of distress and impairment rather than socially constructed concepts of madness - and traumatic shame, an emotional experience of oneself or one's community as inadequate in response to failure, especially the Holocaust as a failure of European culture and modernity. Both traumatic shame and severe mental disorder can make the body conspicuous, alienate people from their cultures, and disintegrate structures of salience and belonging that make sustained relationships and projects possible. Recent existential-phenomenological theories of mental disorder enable reintegrating schizophrenia representation in fiction into the history of literary modernism, especially its concern with historical forces disrupting the minds of individuals. These theories explain changes in mentally ill people's sense of possibilities for developing themselves and relating to others, from the way they experience their bodies to the way they use language. Hence I use these theories to demonstrate how knowledge of schizophrenia enabled post-Holocaust novelists to travesty and transform earlier novelists' uses of fictional minds to interrogate cultural change.