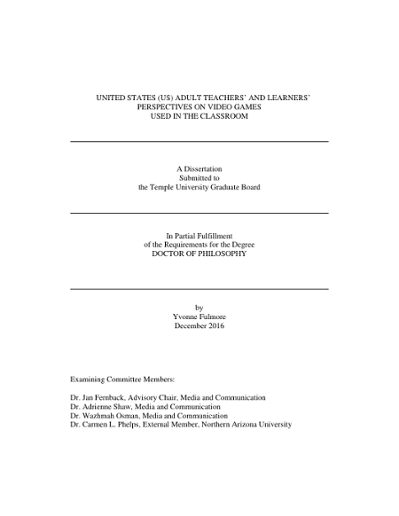 Researchers have explored representations in traditional video games, yet have not significantly investigated the representations in video games used in classroom contexts. Moreover, socially marginalized group members’ perspectives are rarely centered in academic research. This dissertation examined representations of people, ideas, and stories in video games for classroom use, focusing on how 16 self-identified US Black women who were teachers, learners, or both have perceived and encountered them. Furthermore, it drew from cultural studies traditions, which encompass theories that provide the language and space for seeing the world as diverse and nuanced, such as social constructionism, intersectionality, and experience. Data were gathered through using three qualitative methods: content analysis, three individual interviews per participant, and a questionnaire. A theme was recognized when four or more participants referenced a mutual idea. The results of the first research question on in-game representations of race, social class, and gender showed that these constructs were represented through human characters, anthropomorphic characters, or avatar creation options for users. Each game’s overarching structure influenced how it approached representation, with longer games and those designed to be played multiple times having more frequent opportunities to demonstrate character building and convey complex representations. Many games also centered the socially privileged via their representations of people, avatar options, ideas, and stories. Social class was often represented through in-game purchases, possessions, hobbies, and settings. Users often needed to actively create or implement diverse representations in classrooms. The second research question, which addressed participants’ conceptualizations of ideal representations in games for classroom use, showed that overall, participants wanted to see games featuring character, narrative, and ideological diversity across many socially constructed categories, including race, gender, social class, ability, sexual orientation, religion, and age, although they did not all agree on how to approach such representations. They wanted games to be relatable to all audiences while also being sensitive to those who were affected by not being represented. Content-wise, they wanted to see representations that engaged multiple senses and included fantasy elements and opportunities for users to express their creativity. Most participants reported that they would not want games to represent violence, and several participants did not want them to include stereotypes, social -isms, or racial jokes. The third research question’s results showed that the relationship between participants’ perspectives on ideal representations, their experiences, and their individual-centered characteristics—which comprised role descriptors, social constructs, and personality traits—was highly contextual. Participants who self-identified using the same terms, or underwent similar experiences, did not consequently share the same views. Rather, participants’ thoughts on representation were specific to the intersections of their individual-centered characteristics and experiences. In conclusion, this study underscores that it is important to privilege complexity and diversity when examining texts and audiences. It demonstrates how academic research can center members of socially and culturally marginalized groups while preventing myths of group sameness from obscuring individuals’ perspectives. Representations in games for classroom use would benefit from teachers, media practitioners, and researchers acknowledging the diversity of classroom audiences while addressing traditional learning objectives.