The Neuropsychology of Social Functioning in Children with Autism Spectrum Disorder 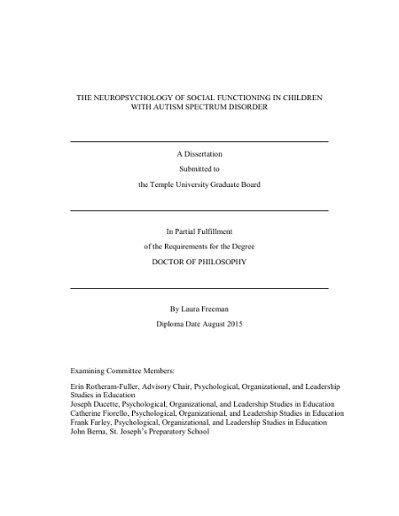 Autism spectrum disorder (ASD) is a developmental disorder characterized by impairments in social interaction, social communication, and repetitive or stereotyped interests (APA, 2013). The hallmark deficits present in children with ASD are difficulties in social interaction and reciprocation (Troyb, Knoch, & Barton, 2011). Social deficits in children with ASD include difficulty creating social relationships, initiating social interactions, emotional reciprocity, sharing enjoyment, perspective taking, and inferring interests of others (Bellini, Peters, Benner, & Hopf, 2007; Troyb, Knoch, & Barton, 2011). Research has indicated that children with ASD have fewer reciprocal friendships as compared to their typically developing peers overall (Rotheram-Fuller, Kasari, Chamberlain, & Locke, 2010) and are mostly peripheral or isolated from their classroom social networks as opposed to their typical peers (Kasari, Rotheram-Fuller, Locke, & Gulsrud, 2012). While numerous interventions have been proposed to remediate these social difficulties, and there has been a plethora of research with regard to the efficacy and effectiveness of social interventions, few studies have investigated the underlying neuropsychological components associated with these difficulties. The executive function theory posits that the deficits present in ASD are a reflection of an impairment of higher order cognitive skills, such as those needed to plan and generate goal directed behavior. This theory suggests that deficits in higher order skills, such as working memory, planning, inhibition, set-shifting, and monitoring underlie the various deficits seen in the everyday functioning of people with ASD (Minshew, Webb, Williams, & Dawson, 2006). Executive deficits have been widely noted, albeit inconsistently, throughout the literature (Hill, 2004; Joseph & Tager-Flusberg, 2004; Pennington & Ozonoff, 1996); however, there is a paucity of research investigating the relationship between executive functions and social skills in children with ASD. The research thus far has been quite inconsistent with some studies failing to find any relationship between executive and social skills (Ozonoff et al., 2004; Landa & Goldberg, 2005) and others finding that some measures of executive functioning are related to social and/or adaptive skills (Gilotty, Kenworthy, Sirian, Black, & Wagner, 2002; Kenworthy, Black, Harrison, Della Rosa, & Wallace, 2009). The current study sought to investigate the relationship between executive deficits and social skills among a group of children with ASD. A total of 23 children with ASD who were included in the regular education classroom, age 5 to 12 years old, were administered a battery of performance-based neuropsychological tests to measure shifting, inhibition, and working memory skills. The Behavior Rating of Inventory of Executive Function (BRIEF) teacher report questionnaire was used to measure the student's executive functions in everyday settings. Social skills were measured with a playground observation and a Friendship Survey that was administered to children with ASD and their peers to capture their social connectedness in the classroom. Results indicated that children with ASD demonstrated impaired performance on performance-based measures of shifting, inhibition, and inhibition-switching. Performance-based measures of working memory skills were in the average range for the children's age. Children demonstrated impairments on several BRIEF clinical scales including Shift, Initiate, Working Memory, and Monitor. The only performance-based measures that were significantly related to social functioning were inhibition and inhibition-switching. Children with better inhibition skills nominated more peers as friends; however, children with better inhibition-switching skills spent more time in solitary play on the playground. Overall, ratings-based measures of executive functioning were more related to social skills. A number of metacognitive skills including initiation, working memory, and planning and organization were significantly related to a greater proportion of playground time spent jointly engaged as well as fewer rejections by their peers. No relationships were found between executive functions and measures of overall social connectedness in the classroom. This indicates that executive skills (as measured by teacher-report) are extremely important with regard to peer interaction on the playground and well as peer acceptance. As a result, social interventions may need to directly target these skills in an effort to increase social engagement and acceptance. This study, however, failed to find a relationship between executive skills and overall social connectedness in the classroom. Given that as the child ages he/she will spend increasingly less time in the playground environment, it is essential that future research investigate the underlying skills necessary to make and maintain friendships.