GLT-1 dysfunction as an underlying cause of cerebral palsy 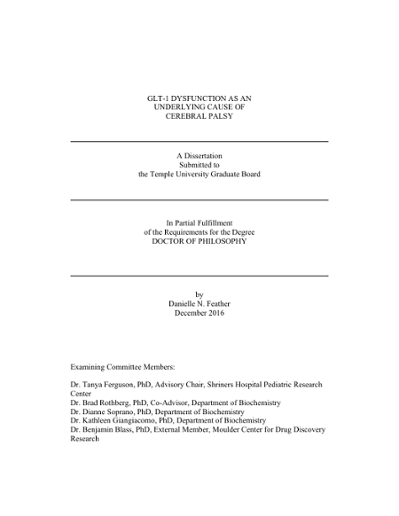 Cerebral Palsy (CP) is an umbrella term that describes abnormal motor movements that is caused by damage in the brain and, depending on the region(s) of the brain affected, can cause additional deficits. Roughly 30-50% of children with CP also have co-morbid cognitive impairments. The underlying insults that cause brain damage in CP are not fully understood. Research has shown that neonatal hypoxia-ischemia combined with intrauterine infection are the most common underlying causes of white matter damage (periventricular leukomalacia) and CP. Most research to date has focused on the role of oligodendrocytes due to the correlation of PVL (oligodendrocyte loss) and the development of CP. However, although oligodendrocyte loss is the prevalent brain damage noted in CP, this research has not lead to a cure; therefore, our focus has shifted toward a different cell type: astrocytes. Astrocytes maintain glutamate homeostasis through the sodium- dependent glutamate transporters, primarily GLT-1, protecting the neurons in the brain from excitotoxic injury. Our hypothesis is that underlying cellular changes, beginning with loss of astrocytes and their glutamate uptake functions through GLT-1, sets the stage for the development of CP, including: periventricular leukomalacia, neuronal cell death, and motor and cognitive deficits. To test our hypothesis, we use a neonatal mouse model of CP that combines hypoxia, ischemia, and inflammation to induce PVL and neuronal death. Using a battery of neonatal motor tests 48 hours after injury, mice with CP show significant motor deficits compared to shams. Additionally, adult mice with CP display motor deficits, indicating that this model has long lasting motor deficits and is an appropriate model to study CP. Interestingly, adult mice also display cognitive deficits, the most common co-morbid condition associated with CP Our preliminary data suggest a 6-8%, decrease in astrocytes in the ipsilateral hippocampus as early as six hours after injury and persists up to 24 hours. Similarly, there is a decrease in GLT-1 function 24 hours after injury. Interestingly, GLT-1 protein expression is not decreased in CP mice until 72 hours following injury, indicating that increased GLT-1 protein is not an early contributing factor in the observed functional changes. Neuronal cell damage is apparent 12 hours after injury and peaking at 18 hours; however, apoptosis begins 24 hours after injury, indicating that signs of neuron injury are delayed. To determine white matter injury, we examined two different white matter tracts: the corpus callosum and the pyramids in the brainstem. In both of these major white matter structures, examined in adulthood, volume is decreased. Beta-lactam compounds are known to increase GLT-1 expression and function and are neuroprotective in injury models. Furthermore, they may offer a therapeutic treatment for CP. We show that MC-100093 (093), an experimental beta-lactam developed by our colleagues, and clavulanic acid (CA), a FDA-approved beta-lactam, can increase GLT-1 transporter activity and protein expression in our CP model, reduce early neuron damage and death, and improve the brainstem pyramid volume loss seen in the adult after injury. In addition to improved cellular outcomes, drug treatment improved behavioral deficits. Neonatal CP mice have improved motor abilities and adult CP mice have improved motor and cognitive skills. These results show that the loss of astrocytes and glutamate uptake through GLT-1 play a role in CP pathophysiology and that beta-lactams may offer a viable treatment option following CP insults.