Engendering Subjectivity: A Study in the Philosophy of Simone de Beauvoir 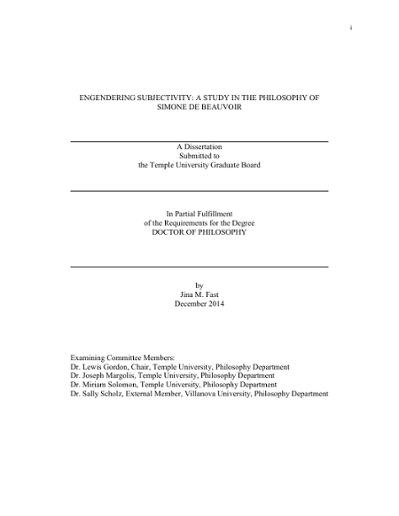 In this study I advance the thesis that Simone de Beauvoir's account of the development of subjectivity is based in a consideration of the Hegelian description of the development of subjectivity in the Phenomenology of Spirit. Like Hegel, Beauvoir argues that an aspect of the development of subjectivity is the ability to discover oneself as related to the collective world. Additionally, she shows through her various works that individual identity and freedom are conditioned by the possibility for intersubjective recognition, and development of a project within an ambiguous relationship between the self, others, and the shared social world. Nevertheless, throughout history this foundation for the possibility of freedom has often been lacking and more so for some groups than others, which points us to an important difference in focus in Hegel and Beauvoir's work. For one, the subject in the idealized Hegelian account comes to recognize its power and freedom as it progresses in its connections and influence within the world. But, for those who have historically lacked options (women, those who happen to be black, the poor, etc.) transcendence in terms of the actualization of one's identity and recognized participation in the collective is at best often co-opted or concealed and at worst impossible. Thus, one of the central differences between Hegel's narrative in the Phenomenology and Beauvoir's in The Second Sex is that for women the cycle is a building up of deception, not a progression to clarity and understanding. This progression as Beauvoir shows is neither natural nor perfect, rather it depends upon the possibilities historically granted to specific social groups and denied to others. The central focus of this study is Beauvoir's analysis of the process of becoming (a) woman, but it is not limited to this. Rather, I argue that through engaging with Beauvoir's philosophy, including her appeal to Hegel, we (1) come to understand the ambiguity of the human condition, desire, intention, and identity, (2) the bad faith that often manifests in our relations with others, and (3) the existence of the spectrums of oppression and privilege. There are, of course, several ways to approach the study of historical figures in philosophy. We can treat them as though they are our contemporaries, analyzing their arguments and clarifying their ideas with the intention of showing their relevance to our contemporary concerns. Or, we can study them in their historical contexts with an eye toward tracing the development of their doctrines, attempting as we go to restructure them within their historical situations and as individuals. Both of these approaches have their benefits and drawbacks. In the former, we succeed in making Beauvoir and Hegel relevant as participants in our contemporary dialogues; but we may be making them relevant through reading our own contemporary views and concerns into their texts. In taking the latter approach, we do not use these historical figures as mere mouths, but through reifying them in their historical context we may find them to be less relevant. In what follows I seek to strike a balance between these approaches, especially in that I am engaging a philosophical predecessor (Beauvoir) who is engaging a philosophical predecessor (Hegel). In order to do this I look at the context in which Beauvoir is using Hegel, the influence of her closest philosophical companions on her use of Hegel, and how feminists have since used Beauvoir's philosophy to address contemporary problems. And while I understand the purpose of philosophy to be in fact engagement, rather than a process of historical excavation, I believe that through examining these various relations we can use historical figures to analyze and resolve the urgent social, political, and theoretical issues of our time, while simultaneously understanding that the times in which they originally philosophized may be vastly different from our own.