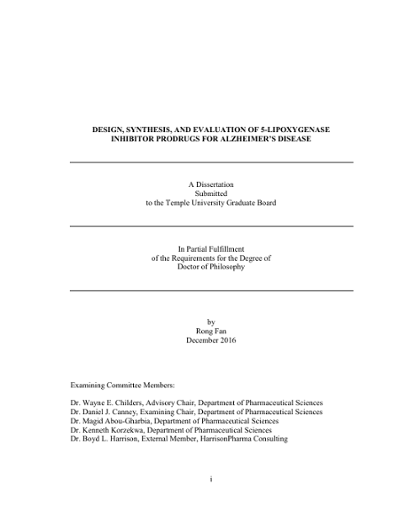 Pharmacologic blockade of 5-Lipoxygenase (5-LO) through its inhibitor, zileuton (Zyflo®), has been shown to reduce both gamma secretase-catalyzed misprocessing of amyloid precursor protein and over-phosphorylation of tau protein (two hallmarks of Alzheimer’s disease (AD)) in transgenic mice (3xTg, Tg2576). However, zileuton suffers from low potency, liver toxicity, gastrointestinal side effects, and a suboptimal metabolism profile that hamper its development as a viable disease-modifying treatment for AD patients, who are usually older. Prodrugs of zileuton that deliver therapeutic concentrations of the parent molecule to the brain at low plasma concentrations could overcome these problems. In addition, other 5-LO inhibitors (ABT-761, BWA4C) with similar structure but greater potency might also be amenable to facilitate the discovery of the best prodrug for AD. A prodrug is a biologically inactive compound that is metabolized in the target tissue to release the parent drug. Prodrug strategies for Central Nervous System (CNS) delivery include masking polar groups with lipophilic moieties that promote brain penetration, Chemical Delivery Systems (CDS) that trap prodrugs in the brain and incorporating brain nutrients which engage Blood Brain Barrier (BBB) nutrient transporters. We have pursued all three strategies to enhance CNS delivery of the prototype hydroxyurea 5-LO inhibitor analog zileuton. To accomplish this task we synthesized and characterized 48 5-LO prodrugs for zileuton that falls into all three prodrug categories, and several lipophilic and CDS prodrugs for the other two 5-LO inhibitors (22 for ABT-761 and 22 for BWA4C,). The prodrugs were tested in a battery of in vitro assays that included solubility, plasma/simulated gastrointestinal fluid/microsomal stability, cell toxicity, and 5-LO inhibition assays. The promising compounds then went to the second tier of screening by equilibrium dialysis with plasma/brain homogenate/microsomes, and in vivo pilot pharmacokinetics study and full pharmacokinetics studies. As a consequence of this work, we identified six zileuton prodrugs (RF14, RF15, RF75, RF77, RF87, and RF88) with reasonable solubility, stability, safety, protein/lipid binding, and no 5-LO inhibitory activities and advanced them to the in vivo pilot pharmacokinetics studies. The most lipophilic prodrug RF58 was also tested in vivo as a comparator to RF14 and RF15 despite its fast metabolism in plasma. However, none of them demonstrated better CNS delivery of parent drug compared to administration of the parent itself. For the lipophilic prodrugs, two carbamate prodrugs (the racemic mixture of RF14 and RF15, RF58) were tested in the in vivo pilot study. The racemic mixture of RF14 and RF15 (RF14/15) with slightly increased lipophilicity (CLogP = 2.81 compared to 2.48 of zileuton) didn’t demonstrate a better brain penetration (Brain/Plasma = 0.06 in RF14/RF15 compared to 0.5 for zileuton). In addition, the carbamate linker was relatively stable in the brain, which resulted in a low zileuton brain-to-plasma ratio (0.03). The very lipophilic RF58 (CLogP = 6.51) demonstrated a large brain-to-plasma ratio (Brain/Plasma = 21.7), however, it suffered from rapid metabolism and extremely slow conversion to zileuton. The conclusions from this category of prodrug were that an increase in CLogP could increase the brain penetration, but the carbamate linker was too stable in the brain to ensure reasonable conversion to zileuton. RF14/15 had less brain penetration possibly because its rotatable bonds were doubled compared with zileuton (rotatable bond = 3). The large increase of entropy offseted the small increase of CLogP. For the CDS prodrugs, distal ester prodrugs were unstable in the in vitro screening, while two distal amide prodrugs with trigonelline and dimethoxy-dihydroquinoline promoieties RF75 and RF77, respectively, showed reasonable in vitro data and advanced to pilot in vivo pharmacokinetics studies. Both of them demonstrated a better zileuton brain-to-plasma ratio (0.726 for RF75, 1.98 for RF77 compared to zileuton 0.5), which indicated a CNS-targeted effect. However, RF75 suffered from rapid peripheral elimination and RF77 suffered from low brain penetration (Brain/Plasma = 0.008), which led to a very low zileuton concentration in the brain and thus both prodrugs did not advance to full pharmacokinetics study. The low level of RF75 was probably due to its fast oxidization to the charged pyridinium intermediate which then suffered from rapid elimination. Similarly, a rapid oxidization would also cause RF77 to show low brain penetration (although p-glycoprotein efflux cannot be ruled out since it was not measured). The conclusions from this approach are that CDS is a good CNS targeted delivery system for zileuton and the distal amide linker is tolerable in this system although the brain conversion (approximately 10%) is slower than the plasma conversion (approximately 30%). The dihydroquinoline CDS system was more stable than the trigonelline CDS system. The low brain penetration of dihydroquinoline system should be investigated and additional substituted dihydrquinoline CDS analogs should be synthesized to continue this investigation. For the transporter-mediated prodrugs, esters were not stable while one glucose prodrugs RF87 with a glycosidic bond and one lysine prodrugs RF88 with carbamate bond were advanced to in vivo pilot pharmacokinetics study. Similar with RF75, although RF87 demonstrated better zileuton brain-to-plasma ratio (0.79), it suffered from rapid peripheral metabolism that prevented its further development. RF88 demonstrated limited brain penetration (Brain/Plasma = 0.013) which indicates either that RF88 was a weak substrate for LAT1 or that this prodrug was more a LAT1 inhibitor than a substrate. However, encouraged by its high plasma concentration at 30 min, it was possible that at a later time the brain concentration of zileuton could be higher. So the full pharmacokinetics studies were performed. However, this prodrug did not provide better zileuton exposure than zileuton itself throughout a 6 hour time period. Although the current prodrugs did not provide better brain zileuton exposure compared to administering the parent drug itself, the project could be further investigated with the parent drugs ABT-761 and BWA4C. In addition, analogs that are less stable in plasma than the ones advanced in the screening triage, CDS promoieties with different substitution patterns to modulate oxidative potential; and transporter-mediated promoieties containing different amino acids and sugars could be further investigated to pursue the discovery of better prodrugs of 5-LO inhibitors for Alzheimer’s disease. The key to success in future efforts will be the identification of a reliable in vitro screening assay to measure the ability of the prodrugs to be converted to parent drug in the brain.