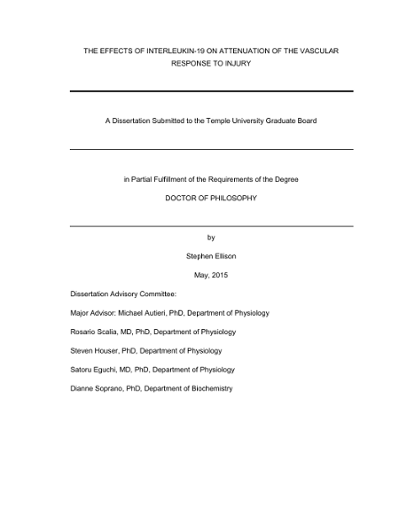 BACKGROUND: Despite aggressive dietary modification, lipid lowering medications, and other medical therapy, vascular proliferative diseases continue to account for 50% of all mortality in the United States. It is a significant medical and socioeconomic problem contributing to the mortality of multiple diseases including myocardial infarction (MI), stroke, renal failure, and peripheral vascular disease. With a growing number of children becoming obese and an increase in the number of patients with co-morbidities such as metabolic syndrome and Type 2 diabetes mellitus, epidemiological studies project the morbidity and mortality of these diseases to increase. Among these vascular proliferative diseases are primary atherosclerosis, vascular restenosis, and allograft vasculopathy, all of which are the result of chronic inflammation believed to stem from initial endothelial injury. Once activated by any number of potential injurious agents, endothelial cells (ECs) secrete cytokines that act on multiple cell types. Stimulation of resident vascular smooth muscle cells (VSMCs) results in a phenotypic switch from a normally contractile state to a proliferative state. Following this phenotypic shift, VSMCs migrate from the media to the intima of the artery where they begin secretion of both pro- and anti-inflammatory cytokines. Vascular proliferative disease ensues as a result of the autocrine and paracrine signaling of these cytokines between many different cell types including ECs, VSMCs, macrophages, and T-cells. As a result of the integral role pro- and anti-inflammatory cytokines play in the development of vascular proliferative diseases, they have become the subject of intense study in the field of cardiovascular research. Interleukin-19 (IL-19) is a newly described member of the IL-10 sub-family of anti-inflammatory cytokines. Discovered in 2000, it was originally only thought to be basally expressed in monocytes and lymphocytes, however in 2005 our lab discovered that while uninjured arteries have no detectable IL-19, arteries of patients with vascular proliferative diseases have notable IL-19 expression. Since its discovery in multiple cell types of injured arteries, our lab has subsequently shown that IL-19 inhibits proliferation, migration, spreading, production of reactive oxygen species (ROSs), and expression of pro-inflammatory genes in VSMCs, while in ECs IL-19 has been shown to promote angiogenesis, proliferation, migration, and spreading. AIMS and HYPOTHESIS: The first aim of the current study is to show that IL-19 is expressed in atherosclerotic plaque, and to test that IL-19 can reduce experimental atherosclerosis in susceptible mice. The second aim of the study is to show that IL-19 can regulate development of intimal hyperplasia in a murine model of restenosis. For both aims, we sought to identify potential intracellular signaling mechanisms of IL-19 which produce the observed effect. These aims directed our overall hypothesis that the anti-inflammatory properties of IL-19 can attenuate the vascular response to injury in various animal models of vascular proliferative disease. METHODS and RESULTS: The first aim of this dissertation showed that LDLR-/- mice fed an atherogenic diet and injected with either 1.0ng/g/day or 10.0ng/g/day rmIL-19 had significantly less plaque area in the aortic arch compared with controls (p&lt;0.0001). Weight gain and serum lipid levels were not significantly different. IL-19 could halt, but not reverse expansion of existing plaque. Gene expression in splenocytes from IL-19 treated mice demonstrated immune cell Th2 polarization, with decreased expression of T-bet, IFNgamma, IL-1&beta; and IL-12&beta;, and increased expression of GATA3 messenger ribonucleic acid (mRNA). A greater percentage of lymphocytes were Th2 polarized in IL-19 treated mice. Cellular characterization of plaque by immunohistochemistry demonstrated IL-19 treated mice have significantly less macrophage infiltrate compared with controls (p&lt;0.001). Intravital microscopy revealed significantly less leukocyte adhesion in wild-type mice injected with IL-19 and fed an atherogenic diet compared with controls. Treatment of cultured EC, VSMC, and bone marrow-derived macrophages (BMDM) with IL-19 resulted in a significant decrease in chemokine mRNA, and in the mRNA-stability protein HuR. In the second aim of this dissertation we showed that IL-19 attenuates vascular restenosis in response to carotid artery ligation. Carotid artery ligation of hyper-responsive friend leukemia virus B (FVB) wild-type mice injected with 10ng/g/day rIL-19 had significantly lower neointima/media ratio (I/M) compared with phosphate buffered saline (PBS) controls (p=0.006). Conversely, carotid artery of IL-19-/- mice demonstrated significantly higher I/M ratio compared with wild-type mice (p=0.04). Importantly, the increased I/M ratio in the knockout mice could be rescued by injection of 10ng/g/day IL-19 (p=0.04). VSMC explanted from IL-19-/- mice proliferated significantly more rapidly compared with wild-type (p=0.04). Surprisingly, in this model, IL-19 does not modulate adoptive immunity. Rather, addition of IL-19 to cultured wild-type VSMC did not significantly decrease VSMC proliferation, but could rescue proliferation in IL-19-/- VSMC to wild-type levels (p=0.02). IL-19-/- VSMC expressed significantly greater levels of inflammatory mRNA including IL-1&beta;, TNF&alpha;, and MCP-1 in response to TNF&alpha; stimulation (p&lt;0.01 for all). No polarization of adaptive immunity was noted in these mice. CONCLUSIONS: These data are the first to report that IL-19 is a potent inhibitor of experimental atherosclerosis via diverse mechanisms including immune cell polarization, decrease in macrophage adhesion, and decrease in gene expression. In addition, these data are also the first to show that IL-19 plays a previously unrecognized protective role in vascular restenosis. Together, these data suggest IL-19 is both anti-atherogenic and anti-restenotic and may identify IL-19 as a novel therapeutic to limit vascular inflammation.