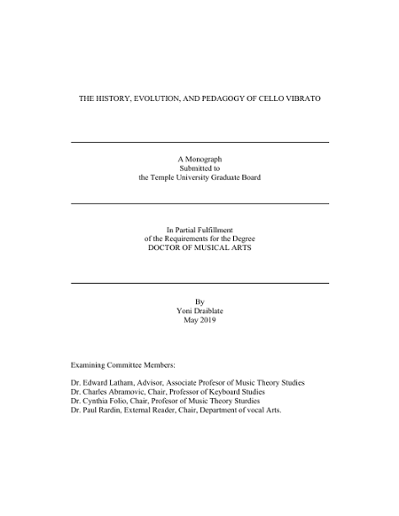 On 9 April 1860, seventeen years before Thomas Edison invented the phonograph, a Parisian inventor named Leon Scott de Martinville invented the “phonautograph,” the first device capable of recording sound. In the demonstration recording produced by de Martinville, the listener hears the inventor singing a short section of the song “Au clair de la lune.” The recording lasts about ten seconds and is not of very good audio quality—it is full of interference and white noise, making it hard to decipher words. Technology has since evolved and improved to the point where we can examine the evolution of vibrato with relative ease, simply by listening to different recordings. When examining the question of cello vibrato prior to the second half of the 19th century with its technological innovations, however, we are left with a somewhat paradoxical question: “How did vibrato sound?“ This question is important for two reasons. First, through exploring the history of cello vibrato we may be able to make clearer inferences or, at the very least, establish more educated hypotheses, pertaining to general questions of sound and musical aesthetics throughout the centuries. Second, examining early cello technique and how it evolved can greatly help us understand the evolution of the left hand’s role in performance, particularly in the creation of vibrato. I am well aware that when it comes to historical performances prior to the introduction of quality recording technology, we can only deal with probabilities, never certainties, and we have no way of knowing what soloists and orchestral musicians sounded like, nor do we have a way to know what composers wished to hear. Since it is not possible to draw conclusions based on audio recordings prior to the end of the 19th century, I will explore the evolution of cello vibrato through close examination of early cello performance practice, as outlined in treatises and texts, as well as accounts by musicians who were key figures in developing and advancing playing techniques. While it will never be feasible to go back in time and hear this evolution for ourselves, it is possible to construct a better understanding of the use of vibrato prior to the second half of the 19th century. My aim in this paper is to better understand the evolution of cello vibrato, its origins, early techniques for producing it, and the influence of technique on vibrato over the years, mainly throughout Europe, in order to better answer this question: when did vibrato become an integral part of the cellist’s sound? Have cellists always used vibrato, and if so, did they use it continuously on all possible pitches? For the performing artist and teacher, it is highly beneficial to know the history and evolution of vibrato, and its role in the development of the cello sound over the years. Having this knowledge can have a direct effect on interpretation. By way of background, I will first discuss the origins of both the instrument and vibrato itself, in separate chapters.