The Bentvueghels: Networking and Agency in the Seicento Roman Art Market 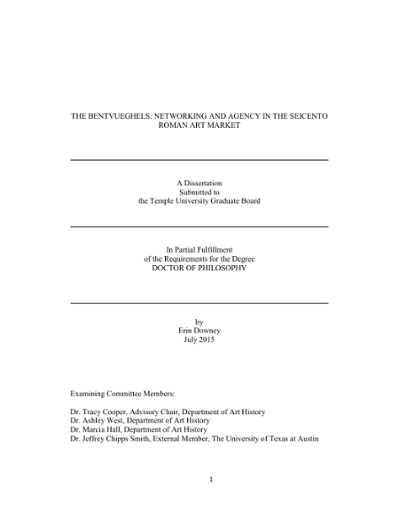 This dissertation evaluates the position of Netherlandish migrant artists in the dynamic cultural environment of seventeenth-century Rome through an examination of the role of the Bentvueghels (“birds of a feather”) as a social and economic nexus for the city’s foreign community. One of the most distinctive societies in the history of art, this high-spirited ex-pat “brotherhood” attracted hundreds of traveling artists and was notorious throughout Europe for its raucous initiations and for the raw depictions of Rome by Pieter van Laer and his followers, the Bamboccianti. While earlier scholarship has established important aspects of the group, such as its history and the artistic significance of individual members, the society has been characterized largely as antagonistic and antithetical to organizations and institutions specific to Rome. I offer instead a fresh outlook on the Bentvueghels that examines their day-to-day economics and response to (and even driving of) market forces in Rome, in order to determine how the society of foreigners as a whole operated functionally within a shifting creative environment in one of the most vital artistic centers in Europe. To address these issues, each chapter is arranged thematically and chronologically, focusing on the period between 1620, when the group first organized, through the close of the seventeenth century, when the last known images of Bentvueghel initiations were created. Using a methodology that integrates art historical primary source investigation with migration theory and network analysis, I analyze the various stages of the journey to Rome for these artists, from initial arrival, to the establishment of a workshop, to the achievement of success in local and international markets. The Introduction (Chapter One) sets up the methodological and historiographical framework for the dissertation. In the second chapter, “Arriving in Rome: The Bentvueghels as a Social and Economic Nexus,” the social activities of the Bentvueghels and their networks are discussed. Archival sources including parish censuses, criminal court records, and notarial documents demonstrate how the group enabled migrant artists to adapt to a different—and often hostile—market by fostering surrogate kinship networks. The Bentvueghels offered migrant artists, who were typically young (around 22-25 years of age), male, and single, a place to live, a ready-made network of friends, and critical financial assistance. Chapter Three, “Working in Rome: Bentvueghel Workshops and Working Practices,” establishes the working practices of Dutch and Flemish artists, a relatively uncharted area of research, and locates economic and social network formation within the space of the workshop. Centers of artistic production in the city are scrutinized, from the highly trafficked studios of Netherlandish artists such as Paul Bril to the private drawing academies hosted by prestigious patrons, including the celebrated Genoese aristocrat, Vincenzo Giustiniani. Paintings, drawings, and prints produced by Dutch and Flemish Italianate artists are compared to identify patterns in workshop practices, determine market impact, and measure the degree to which they were influenced by their new surroundings and by their association with the Bentvueghels. In the fourth and final chapter, “Staying in Rome: Cornelis Bloemaert II as a Case Study for Long-term Strategies of Networking,” I explore strategies of integration among members who remained in Rome for extended periods, focusing on the engraver Cornelis Bloemaert II as a case study. Collaborative enterprises such as large-scale book productions, which comprised a significant proportion of Bloemaert’s artistic output in Rome, provided ways for artists to enhance their artistic education and experiment with new techniques and motifs, while also encouraging further expansion and development of an artist’s social and economic networks. This study thus evaluates the full scope of a foreign artist’s experience in Rome, highlighting with greater accuracy the ways in which affiliation with the Bentvueghels influenced acclimation and eventual integration within the social and cultural fabric of the city. It offers, moreover, a much needed contextualization of the artistic relations between northern European and Italian artists in seventeenth-century Rome, and the important position of the Bentvueghels within this cosmopolitan environment.