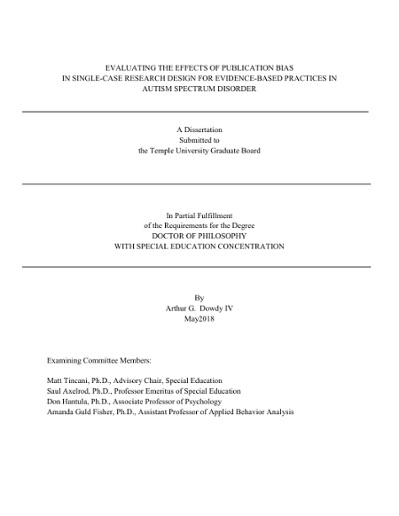 In single-case research design (SCRD), experimental control is demonstrated when the researcher’s application of an intervention, known as the independent variable, reliably produces a change in behavior, known as the dependent variable, and the change is not otherwise explained by confounding or extraneous variables. SCRD studies that fail to demonstrate experimental control may not be published because researchers may be unwilling to submit these papers for publication due to null findings and journals may be unwilling and unlikely to publish null outcomes (i.e., publication bias). The lack of submission and publication of null findings, leading to a disproportion of positive studies in the published research literature, is known as the “file drawer effect” (Rosenthal, 1979; Ferguson & Heene, 2012). Recently, researchers and policy organizations have identified evidence-based practices (EBPs) for children with autism spectrum disorder (ASD) based on systematic reviews of SCRD studies (Odom, Collet-Klingenberg, Rogers, & Hatton, 2010). However, if SCRD studies that do not demonstrate experimental control (i.e., null studies) are disproportionately unpublished due to the file drawer effect, this may result in a misrepresentation of positive findings, leading interventions to be deemed evidence-based that, actually, lack sufficient empirical support (Sham & Smith, 2014; Shadish, Zelinsky, Vevea, & Kratochwill, 2016). Social narratives, exercise, self-management, and response interruption/redirection are interventions for children with ASD that has been named EBPs according to the National Autism Standards (NAC; 2009) and National Professional Development Center on Autism Spectrum Disorder (NPDC; 2010); however, these interventions have not yet been evaluated for potential publication bias. The study employed and extended methods similar to Sham and Smith (2014), comparing the procedures and results of published articles and unpublished dissertations and theses for interventions identified as EBPs to evaluate the methodological rigor and evaluate the possibility of publication bias, file drawer effect, and lack of replication. Specifically, the results of published and unpublished studies were compared to determine if published studies showed greater treatment effect, which would indicate the file drawer effect. Also, SCRD quality indicators were employed to evaluate whether studies that were published tend to be of higher quality, as this would mitigate possible publication bias shown by larger effect sizes (ES) in published studies. The outcome resulted in three out of four EBPs (social narratives, antecedent exercise, and response interruption and redirection), yielding different ES when published studies were compared to unpublished studies; in contrast, self-management yielded a similar ES for published and unpublished studies. For social narratives and antecedent exercise, unpublished studies presented at lower estimated ES than published studies; whereas for response interruption and redirection, unpublished studies presented at a higher estimated ES compared to published studies. Generally, study quality presented at similar levels for published and unpublished studies for each EBP, with the exception of antecedent exercise. Differences were identified for antecedent exercise study quality based upon visual and statistical analyses. Lastly, there do not appear to be observed differences in treatment outcomes between published and unpublished studies when study quality was considered in the analysis. Implications of the results are discussed with respect to the file drawer effect and publication bias in EBPs, and the call to increase publications in peer-reviewed journals of negative findings and replication studies, which leads to identifying and establishing boundary criteria for EBPs.