Studies on Ligands of the Kappa Opioid Receptor 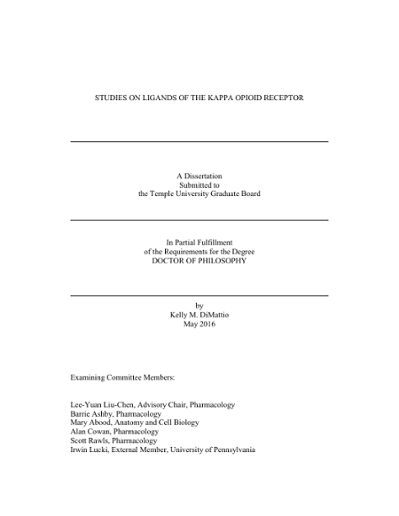 This thesis is comprised of three parts. In the first part, we investigated zyklophin, a novel selective short-acting kappa opioid receptor (KOPR) antagonist, and its effects on scratching behaviors in Swiss-Webster mice. We investigated whether zyklophin was able to induce scratching in a dose-dependent fashion, and whether this scratching behavior could be blocked by pretreatment with nor-binaltorphimine (norBNI). We also used KOPR -/- mice to further clarify the role of the KOPR in this behavior. In the second part, we examined the role of the divergent amino acid at position 6.58 in the mu opioid receptor (MOPR) and the KOPR on the binding of beta-funaltrexamine ß-FNA). ß-FNA is an irreversible antagonist at the MOPR and a reversible agonist at the KOPR. Utilizing the recently published crystal structures of the MOPR and KOPR, we collaborated with Dr. Lei Shi, who employed molecular modeling to choose a residue in transmembrane helix 6 (TM6) to mutate at the same position in MOPR and KOPR. We then characterized the mutants by performing [3H]diprenorphine binding, competition binding by unlabeled &beta;-FNA, irreversible ß-FNA binding and [35S]GTPγS binding. In the third part, we investigated the concept of functional selectivity, or ligand bias, at the KOPR. We studied 23 different KOPR agonists in vitro using [35S]GTPγS binding as a measure of G protein activation and the on-cell Western (OCW) as a measure of ß-arrestin-mediated receptor internalization at the human KOPR (hKOPR), and from the results, chose 13 ligands to study at the mouse KOPR (mKOPR). We then selected biased ligands from the in vitro mKOPR results and studied their effects on scratching behavior, inhibition of pain behaviors and dysphoria as measured by the conditioned place aversion (CPA) test. We predicted that the G biased ligand would produce analgesia and anti-scratching effects at lower doses than would produce aversion in the CPA test, since analgesia has been shown to be G protein mediated and CPA has been shown to be arrestin mediated. Our first set of studies revealed that zyklophin (0.1, 0.3 and 1 mg/kg, s.c., behind the neck), induced vigorous scratching in a dose-dependent manner. 0.3 mg/kg zyklophin induced 150 scratches over a 30 minute period. The scratching was not blocked by pretreatment with 20 mg/kg norBNI (i.p.) 18-20 hours before injection of 0.3 mg/kg zyklophin s.c. in the nape of the neck. The scratching also persisted in KOPR -/- mice, in which the absence of the KOPR was confirmed by [3H]U69,593 binding (2 nM). In our second set of studies, we mutated the lysine at position 303 in the MOPR to glutamic acid (K303E), and the glutamic acid at the equivalent position in the KOPR to lysine (E297K). We transfected these mutant receptors into mouse neuroblastoma (N2A) cells. We found that the mutations had no effect on [3H]diprenorphine binding affinity or competition binding with [3H]diprenorphine and &beta;-FNA indicating a functional intact opioid receptor. The mutations also did not affect [35S]GTPγS binding EC50 or Emax values. The mutation K303E in the MOPR reduced irreversible binding by 2/3 compared to the wildtype MOPR. Finally, we found that there were several ligands that displayed bias at the hKOPR and the mKOPR. At the hKOPR, using dynorphin A as the reference ligand to calculate bias, ICI-199441 was the only G biased ligand, while enadoline, nalbuphine, pentazocine, salvinorin A, tifluadom and butorphanol were arrestin-biased. At the mKOPR, only salvinorin B methoxymethyl ether (MOM-SalB) was G-biased, and salvinorin B ethoxymethyl ether (EOM-SalB), ICI-199441, U50,488H, nalfurafine and 12-epi-salvinorin A (12epiSalA) were ß-arrestin-biased. Enadoline and salvinorin A were slightly arrestin biased with respect to dynorphin A. From the in vitro data at the mKOPR, we selected MOM-SalB as our G biased ligand, U50,488H as our arrestin biased ligand and additionally chose to investigate nalfurafine due to its use in clinical studies. We hypothesized that U50,488H and nalfurafine would produce aversion at lower doses than analgesia or anti-pruritic effects. We found that nalfurafine was the only ligand studied to have a separation between doses that produced analgesia and anti-scratching effects, with A50 values of 5.8 and 8 μg/kg, respectively, and only produced significant dysphoria at a dose of 20 μg/kg. U50,488H and MOM-SalB produced dysphoria at all doses tested (0.25-10 mg/kg and 0.01-0.3 mg/kg, respectively). U50,488H produced a dose-dependent analgesia and anti-scratching with A50 values of 0.58 mg/kg and 2.07 mg/kg, respectively. MOM-SalB was more potent than U50,488H in producing dose-dependent analgesia and anti-scratching, with A50 values of 0.017 mg/kg and 0.070 mg/kg, respectively. Therefore, we concluded that the in vitro bias is not able to accurately predict in vivo behaviors, and nalfurafine is the first selective full agonist at the KOPR to show ligand bias in vivo.