Starting with Snow White: Disney's Folkloric Impact and the Transformation of the American Fairy Tale 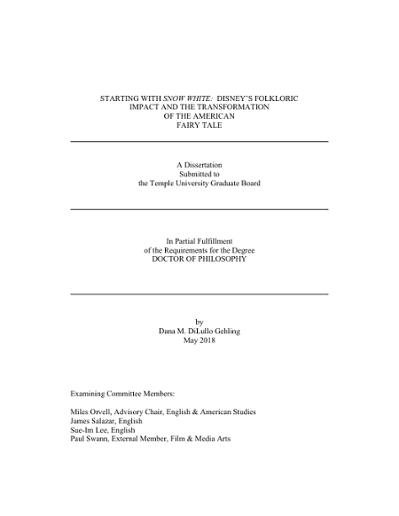 Since the late 1960s and early 1970s, critical scholarship concerning the fairy tale genre has done much to address the social, historical, cultural, and national motivations behind transformations of the fairy tale from a European starting point. However, the fairy tale’s development in the United States, including both its media-based adaptations and literary extensions, has been given limited attention. While the significance of Walt Disney’s animated films to the American fairy tale tradition has been addressed (by literary and film scholars alike), an interdisciplinary study drawing together Disney’s European and early twentieth century precursors (from literature, stage, and film); his own influential, modern debut; respondent literary and animated work of his immediate successors; and postmodern and twenty-first century adaptations has not been done. By examining the trajectory of a single tale, Snow White (or for Disney, Snow White and the Seven Dwarfs), this dissertation aims to acknowledge the scholarly attention given to Disney’s animated films, while further examining attributes which I suggest have enabled Disney to have a “folkloric impact” on the fairy tale genre in the United States. Disney’s work stands upon the bedrock of not only European but American Snow White variations and makes these “new” through an innovative deployment and unification of word or language, sound, and image, unimagined prior to the debut of Snow White and the Seven Dwarfs (1937). The effects of Disney’s influence, as a master storyteller, on both the fairy tale genre and commercial market were so profound that this particular version of the tale refuses to be forgotten, its shadow haunting successors who aimed to counter or redefine its understanding of fairy tale in light of shifting American values and culture. Therefore, even as the fairy tale is frequently understood to have moved beyond its folkloric “origins” (I use this term loosely, as the origins of fairy tale are surrounded by controversy), using the critical framework of folklorists Steven Swann Jones and Linda Dégh, as well as filmic folklorists, Sharon R. Sherman and Juwen Zhang, I explore how Disney’s patchwork of tradition, new technology, and media generated an easily recognizable and communicable tale, one that would be recalled, repeated, and reformed through adaptation by generations of audiences. These subsequent storytellers, in turn, extend American fairy tale tradition and lore still further.