COMBINED OZONE AND ULTRASOUND PROCESS FOR THE DESTRUCTION OF 1,4-DIOXANE IN CONTINUOUS FLOW REACTOR 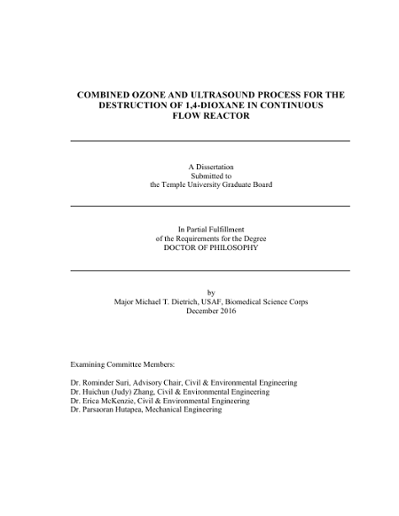 Clean water is essential to life. Growth in world population, changing diets, and a warming climate are driving an increase in the demand for water. Better management of water resources will help prevent scarcity, but in order to fully meet the future demand for safe, clean drinking water, new water treatment technologies are needed. This dissertation investigates a technology which is not well understood; the combination of ozone and ultrasound as potentially an efficient technology. Since nearly all previously published studies of combined ozone/ultrasound utilized batch reactors, a continuous flow reactor was constructed for this research. 1,4-Dioxane, henceforth referred to as dioxane, was chosen to evaluate the effectiveness of the combined ozone/ultrasound process. Dioxane is commonly detected in surface and groundwater and is a suspected human carcinogen. A recalcitrant contaminant, it resists direct oxidation by chlorine, oxygen, ozone, and biological treatment. It is miscible in water and doesn't sorb readily to organic matter, so it spreads rapidly in groundwater contamination plumes. It also resists air stripping and filtration, including reverse osmosis. For these reasons, dioxane makes an excellent candidate to measure the effectiveness of advanced oxidation processes, such as combined ozone/ultrasound. The treatment of dioxane by advanced oxidation processes has been studied extensively in the past. However, only one study has been published using combined ozone/ultrasound, and it was done in a batch reactor operating at a high ultrasonic frequency. The reactor built for this study also permitted reactor pressurization effects to be studied in a manner that has not been reported before for the combined ozone/ultrasound process. In this study, the combination of ozone and ultrasound was found to cause synergistic removal of dioxane from drinking water; the removal achieved by the combination significantly exceeded the sum of the removal achieved by ozone and ultrasound separately. In fact, the combination of ozone and ultrasound was found to remove more than double the dioxane that would be removed by doing both treatment processes separately. Ultrasound (20 kHz) was ineffective in removing dioxane alone, achieving less than 20% removal. At 16 mg/L, ozone alone was found to achieve removal of up to 86% after a 16 minute treatment time, but appears sensitive to matrix effects, especially pH. When ultrasound was combined with just 1.2 mg/L of aqueous ozone, over 90% removal occurred after a 16 minute treatment. Removal of dioxane was found to be driven not by ozone itself, but by radicals, suggesting that the decomposition of ozone is responsible for the generation of radical species and subsequent removal of dioxane. Ultrasound was found to increase the decomposition of ozone and appeared to be driving increased mass transfer of ozone into the aqueous phase. Modest reactor pressure appears to aid dioxane removal, but further increases in pressure did not appear to further enhance removal. An empirical model was constructed using a form similar to the Chick & Watson model for disinfection. Given inputs of initial aqueous ozone concentration, initial dioxane concentration, treatment time, and ultrasonic power, the model is able to predict effluent concentrations of dioxane with a relative root mean squared error of less than 5%. Additionally, RCT and mass balance analyses were performed, and both analysis techniques suggested that the removal of dioxane is dependent on the consumption of aqueous ozone. Spiked drinking water is representative of water that has undergone conventional treatment but requires a polishing step, and the combined ozone/ultrasound has shown promise as a polishing technology. Owing to its recalcitrance, prevalence, and mobility, dioxane represents a real and challenging groundwater contaminant, and combined ozone/ultrasound has shown promise as a groundwater treatment option. Additionally, the process is capable of dioxane removal in a pH range of 4-10. This pH independence, coupled with its ability to degrade recalcitrant contaminants, suggests that combined ozone/ultrasound holds promise as an industrial wastewater treatment option, too. The removal achieved by both ozone and combined ozone/ultrasound was an order of magnitude greater than what has been reported in previously published reports. However, a comparison of cost effectiveness relative to other advanced oxidation processes remains an area for future study. Finally, the combined ozone/ultrasound process holds promise as a drinking water treatment option in remote areas, since it requires only electricity. As a promising technology for polishing water for reuse, treating contaminated groundwater, treating industrial wastewater, and potentially improving access to safe drinking water in remote areas, combined ozone/ultrasound could aid in meeting global water demand in the future.