The Resurrection and the Knife: Protestantism, Nationalism, and the Contest for the Corpse During the Rise of American Medicine 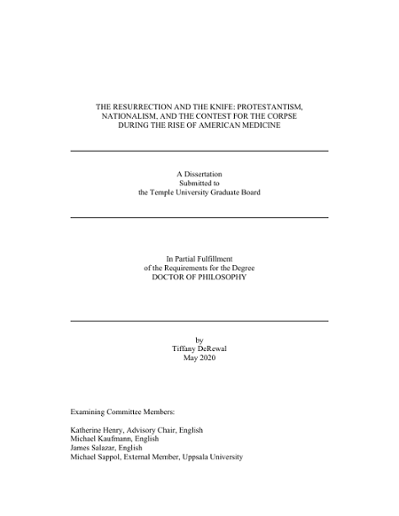 This dissertation examines how advocates for anatomical medicine in the early American republic defended medical training through dissection by framing anatomy as a Protestant spiritual and civic initiative. The project draws attention to prominent anatomists and anatomy advocates from the 1760s to the 1830s who did not dismiss the religious values and rhetoric of the people who rioted against dissections and bodysnatching, but instead imaginatively remodeled the Christian principles that had been wielded against them. Utilizing the public forums that were afforded to them as wealthy white Protestant intellectuals, these figures drew upon the mythologies of the new nation as well as the New Testament to defend the practice of dissection and persuade a largely Protestant public of the virtues of the dissected corpse. As this project will emphasize, they also used evangelical Protestant ideology to justify the pillaging of African American cemeteries and almshouse burial grounds for dissection subjects. Reinforcing an evangelical Protestant and portrait of nativist American citizenship, their rhetoric would ultimately play a powerful role in shaping state intervention in the regulation of medical schools and their supply of anatomical subjects. This project ultimately aims to reframe our understanding of the discursive formation of the dead body as a medical subject in the early republican era, seeking to illuminate how dead bodies were talked about—how they were discursively formed—by those who opened and examined them: practitioners of practical anatomy who not only dissected dead bodies, and likely disinterred them, but also launched public campaigns to repurpose them as tools of medical training. Tapping into the era’s evangelical postmillennialist rhetoric of resurrection, these figures petitioned the state and the public to draw a line between the respectable white citizens who contributed to civic progress, whose bodies would remain undisturbed after burial, and indigent and non-white populations, who could be made productive after death. At once religious and medical, their rhetoric functioned epistemically to transform medical training into a mode of Protestant civic discipleship, and to transform the dead bodies of socially and politically burdensome populations into redeemed post-mortem vessels of medical advancement. Recognizing the production of medical knowledge in the United States in a wide range of genres, authored by writers operating within as well as outside of the fledgling orthodox medical establishment, this dissertation analyzes the imaginative writings, both positive and critical, of doctors, ministers, satirists, novelists, and legislators, all of whom registered and reflected upon the framing of practical anatomy as a conduit of Protestant civic initiative. In “Dr. Shippen’s Anatomical Theatre: Defending Dissection in Colonial Philadelphia,” I examine an early model of this rhetoric in the writings and orations of Dr. William Shippen, Jr., one of the earliest outspoken advocates of anatomical dissection in the colonies, demonstrating how Shippen relied on Protestant language and cultural norms—and the colonial newspaper—not only to align himself and his anatomy lectures with the city’s religious elite, but also to create a spiritual justification for the use of the bodies of poor, criminalized, and otherwise subjugated individuals as dissection subjects. The chapter closes by tracing how two subsequent texts, a satirical pamphlet poem by Francis Hopkinson and a landmark state legislative report in defense of anatomical dissection, registered and responded to this rhetoric, and to the collusion of Protestant virtue and medical authority as tools of social order. “The Enlightened Gospel of Anatomy on the Atlantic Stage” spotlights Presbyterian minister Samuel Stanhope Smith’s 1787 Essay on the Causes of the Variety of Complexion and Figure in the Human Species, and Federalist statesman Royall Tyler’s 1797 novel The Algerine Captive. Situating both texts within transnational debates about American degeneracy and the expansion of the American slave economy, I outline how each author mounts a defense of American health and character that is grounded in anatomical knowledge of the human body as well as a Protestant framework of moral virtue. Taken together, the texts bear witness to a growing confidence in doctors—particularly anatomists—to understand and order human difference, and they demonstrate the continuing rhetorical framing of anatomical medicine as a Protestant civic initiative in the decades after the American Revolution. The dissertation’s final chapter, “ ‘life, strength, and usefulness’: Resurrection and Redemption in Sheppard Lee,” examines the ongoing consolidation of Protestant rhetoric in support of anatomical medicine in the early nineteenth century, as both American and British lawmakers began to take up the case for legislation to regulate and protect anatomical training for medical students through dissection. The chapter begins by identifying the rhetoric of Philadelphia anatomist John Davidson Godman as a principal influence in the development of the first American anatomy legislation, demonstrating how Godman utilized the rhetoric of Protestant nativism to strategically position anatomical medicine as a beacon of enlightened Christianity in the young republic, while also preserving the secrecy of an illicit interstate corpse trafficking network centered in 1820s Philadelphia. The chapter then considers how a novel written by a physician who was trained in Philadelphia’s medical institutions during this period engages with Godman’s rhetoric, and with the various debates and philosophies surrounding anatomy legislation in the Anglo-Atlantic world. In Robert Montgomery Bird’s 1836 Sheppard Lee: Written by Himself, Bird mimes and critiques the rhetoric of utilitarian anatomy advocacy, as well as the Protestant rhetoric of redemptive dissection. Bird generates a provocative cultural portrait of institutionalized dissection in the Atlantic world, underscoring the political distinctions that ultimately determined which corpses should be protected, which should be dissected, and which should be preserved. Considering corpses not merely as abstractions or metaphors, but as literal, material entities that incited riots, spurred industries, and inspired nativist fantasies, this dissertation illuminates the fraught negotiations and acts of power that undergirded what is often regarded as a natural or inevitable narrative of modern secularization and scientific progress. At its most ambitious, this project aims to embody a new dimension of interdisciplinary work in the medical humanities, reshaping our understanding of the origins of the medical cadaver and prompting new reflection on the secular morality of postmortem medical research.