AN INVESTIGATION OF FIRM RESPONSES TO RAPID VS. CONTINUOUS INSTITUTIONAL CHANGE: DYNAMIC VIEW OF FIRM PERFORMANCE AT POST-ENTRY 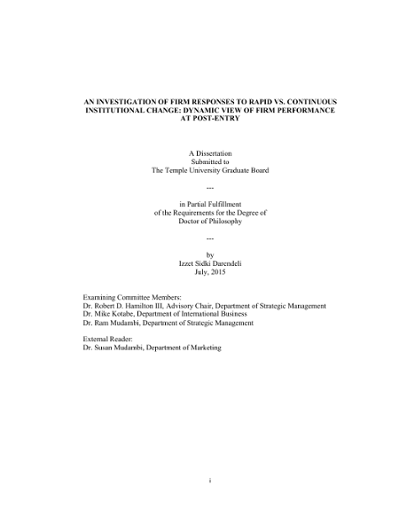 This dissertation consists of three essays broadly centering on external changes and how organizations respond to these change by altering themselves. My investigations focus on knowledge transfer and innovation related firm responses with an emphasis on firms’ especially, Multinational Enterprises’ (MNEs) market strategies such as ownership, governance and location choices and their non-market strategies such as political networking and stakeholder management. I'm particularly interested in emerging countries and the changing institutional environment in those contexts. To study changes occurring in different speeds and varying firm responses to them, I have hand-collected longitudinal datasets for different industries and employed both qualitative and quantitative methodologies: my datasets covers both moderately-dynamic industries such as multinational construction and retailing and as well as more knowledge-intensive industries such as multinational pharmaceutical, electronics and computer & software industries. Chapter 1: MNE Legitimacy in the Eyes of the People: Insights from Libya about Surviving Association with an Overthrown Regime In the first chapter, I investigate how firms respond to changes that are less-anticipated and takes place in a rapid fashion. Differentiating between the learning that MNEs accumulate at the host-countries and related learning they transfer from similar locations, this paper is built upon and extend theories about how MNEs, cope with institutional voids and transitions in relation to their political connections, corporate social responsibility strategies and interactions with stakeholders in the emerging countries. In order to do so, I conducted an in-depth qualitative study on how different MNEs with different interaction levels to the Gaddafi Regime, society, tribes and the new government in Libya were affected by the Arab Spring. In this paper, using the Arab Spring as a natural experiment and employing Qualitative Comparative Analysis (QCA) and Fuzzy-set methodology, we build new theory on how MNEs can survive and even thrive during times of fast institutional transitions. We introduce “the legitimacy of the government” as an alternative measure of host-country political environment assessment and suggest that MNEs that deepened, broadened and expanded their political connections and strategies to multiple political actors and complemented them with CSR related activities fare better major institutional changes at the host countries. In addition, the results suggest that host-country only specific learning can lock-in MNEs not to see the changing “tea leaves” if they don't complement it with their recent related experiences from their operations other countries. Chapter 2: The Effect of Different Post-Entry Experiences on Changing Market Entry Choices The second chapter focuses on post-entry operations of multinational retail firms that are required to offer a standardized service for an effective knowledge redeploying, but also need to recombine their HQ knowledge with the knowledge that the subsidiaries possess, to ensure adaptation to the local conditions at the same time. The change, now being the multiple uncertainties related with multinational retail chains’ internationalization into different locations, I first analyze how these firms decide on efficient firm boundaries and positioning after their entry into the host countries, and then investigate effects of these post-entry choices on their performance at the host-countries. Constructing a novel data-set of MNEs post-entry commitments in the host countries, my study reviews MNEs’ behavior after they have entered a foreign country and individually tracks their alteration of its ownership and retail format changes over time within that country starting from 1975 and until 2013. This paper provides a more process-based understanding of MNEs’ choices and strategies at the host countries, which extends the scant literature on mode-dynamics. The empirical results show that; MNEs are more likely to change their governance modes after the negative initial performance rather than after the positive initial performance, however, they tend to act completely in the reverse fashion for their decisions regarding changing their initial format choices at post-entry. I also show that the MNEs that change these initial market entry choices regardless of the initial performance have higher probability of survival at the host countries at post-entry, controlling for the dissimilarity between the home and the host countries and after taking into consideration of the possible selection effect of initial market entry decisions. Chapter 3: Differential Effects of Local, Foreign Firms and Supra-National Institutions on the Pace of Institutional Change in Developing Countries In the third chapter, I track changes in local innovation process and IP regime at the same time in the knowledge intensive patent areas such as pharmaceuticals, computer, software and electronics in developing countries. My focus is on Trade Related Intellectual Property Standards (TRIPS) agreement which was signed between developed and developing countries that made it compulsory in emerging countries the protection of product patents along with the process patents. Developing countries were given a 10-year allowance until January 1, 2005, in order to bring their patent system into line with TRIPS obligations as well as other flexibilities. Interestingly, while some of the developing countries such as India used these flexibilities and waited until the end of the 10-year allowance, some countries such as Brazil, Korea and Turkey ratified the TRIPS agreement and put the new regulations into action right away. We explain the variation in developing countries’ rate of TRIPS compliance by new institutionalism and co-evolutionary perspectives, by presenting a framework that shows effects of different actors within innovation systems on different trajectory and rates of institutional change. The results indicate that higher composition of local firms result in slower change of the IP Regime in developing countries, while higher the Advanced Country Multinationals, faster the change. I also find that supranational institutions such as IMF moderate this relationship.