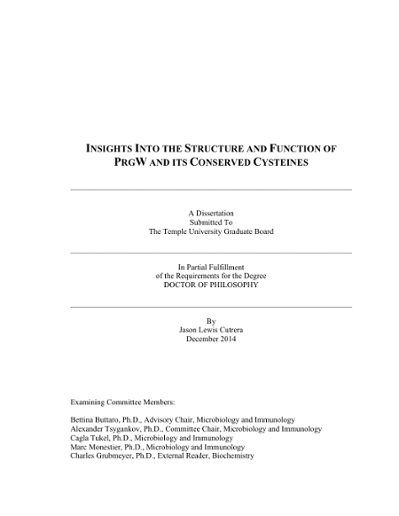 Enterococcus faecalis is a Gram-positive bacterial species that is typically a member of the human gastrointestinal tract microbiota. However, E. faecalis is also a nosocomial pathogen, which is involved in urinary tract infections, soft tissue infections and endocarditis. In recent times, the occurrence of antibiotic resistance has complicated the treatment of these infections. One of the major differences between commensal and pathogenic strains of E. faecalis is that pathogens contain multiple mobile elements such as plasmids, transposons and integrative conjugative elements (ICE). These elements allow for the acquisition and transfer of virulence factors and resistance genes. Conjugative plasmids are a class of plasmids present in E. faecalis whose transfer to host cells is induced by a small pheromone peptide, cCF10 (LVTLVFV). This peptide is initially encoded as a 22-amino acid precursor (pre-cCF10) from the signal sequence of the chromosomal ccfA gene and is then proteolytically cleaved by signal peptidase II and Eep. Once pCF10 has been transferred a host E. faecalis cell, it is exceptionally stable. A replicon clone is maintained in greater than 85% of host cells over 100 generations in the absence of selection, suggesting the stability of pCF10 is intrinsic to the replicon. Three unique features of the replication initiation protein PrgW may contribute to this stability: (a) the interaction of PrgW with pre-cCF10, (b) disulfide bond formation at three conserved cysteines (C78, C275, and C307) in PrgW, and (c) processing of the nascent PrgW protein. Replication initiation proteins associated with theta replicons, such as pCF10, are often self-contained units. To initiate plasmid replication, the replication initiation protein (PrgW) binds to direct repeats (oriV) in its own coding sequence (prgW). In silico analysis of PrgW suggests the existence of three distinct domains within the protein. The first 122 amino acids are homologous to a conserved domain present in related replication initiation proteins, which includes a Helix-Turn-Helix (HTH) DNA binding domain. This suggests that this domain of PrgW has a DNA-binding function and binds to the oriV site in prgW. The following 61 amino acids are not similar to any known sequence, and are encoded by the DNA sequence containing the direct repeats in the oriV site. This domain may or may not have a distinct function. The remaining sequence forms a domain that contains cysteines C275 and C307, and is also similar to no known structure. It is hypothesized that this domain is related to the stability of pCF10. C307 appears to be critical, as previous experiments indicate that its mutation alone affects plasmid stability. Secondary structure analysis of this domain revealed the presence of multiple alpha-helices that contain distinct hydrophobic domains that possibly contribute to pre-cCF10 binding and PrgW tertiary structure. The positions of the conserved cysteines within these alpha-helices may stabilize a hydrophobic binding pocket that could potentially facilitate interaction with pre-cCF10. PrgW has a predicted molecular weight of 38.6 KDa and can be detected in Western blots as a band with an apparent approximate molecular weight (mw) of 36,000. Previous data from our lab indicates that, when overexpressed in E. faecalis, four bands of PrgW are present with observed molecular weights of 40,000, 36,000, 24,000 and 18,000. Time course experiments revealed that the 40,000 mw form is converted to a 36,000 mw form independent. The 40,000 mw form is unstable (with a complete turnover in 30 minutes) while the 36,000 mw form has a half-life of greater than 4 hours. The 24,000 mw band does not have a DNA binding motif and is likely a turnover product. When the three conserved cysteines (and only cysteines) in PrgW are replaced with alanine, the 40,000 mw form is still processed to the 36,000 mw form. However, the cysteine to alanine mutants accumulate the 36,000 mw form.