"THE SWEETEST OF ALL WORDS": HOME AND RHETORICS OF ISOLATIONISM IN ANTEBELLUM DOMESTIC LITERATURE 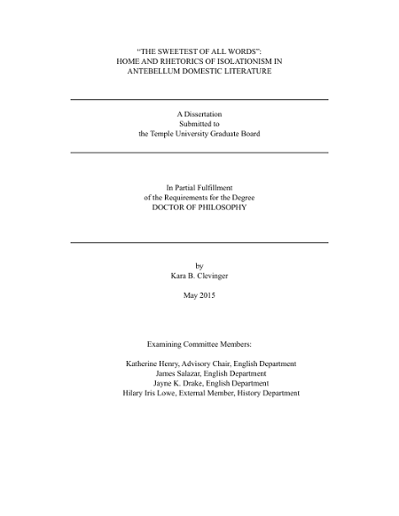 This dissertation is a study of antebellum literature about the home and the post-Revolutionary conceptualization of domesticity as political participation. Analyzing texts that take the construction, management, and pursuit of a home as central concerns, I trace a cultural preoccupation with isolation in the idealization of the home. The cult of domesticity that emerged and was reflected in these texts was a troubled, conflicting response to the ideology of Republican Motherhood, which defined a woman's political contribution as raising good citizen sons and patriotic daughters. By taking a previously private role and turning it into a public duty, the mother became a highly visible and symbolically loaded figure. It also made her sphere of action, the home, a highly charged political space, subject to government intervention and social control. In conduct manuals, magazines, memoirs, and fiction, women writing about the home represent it as vulnerable to unwelcome intrusion, invasion, and influences, giving both power and critique to the ideal of home as isolated and pure, and, ultimately, attempting to reveal a domestic ideology that was at odds with Republican Motherhood and notions of liberal privacy that held the home to be a completely private, independent space. Tracing this tension in canonical and popular literature, I construct comparisons of texts not frequently put into conversation with each other, drawing provocative parallels and important distinctions between them and opening up scholarly understandings of domesticity with discussions of isolation and purity. Beginning with an analysis of domestic manuals by Catharine Beecher and Lydia Maria Child, I read these texts side by side with manuals on the construction of the asylum and penitentiary, which along with the home were built on models of isolation. These prescriptive texts attend obsessively to air purity and proper ventilation, and the figure of the nation's "inmate" emerges: a version of subjecthood in which self-development and redemption rely on an environment protected from all external influences (physical, political, economic, and social). Following this version of the ideal home as it plays out in the most popular women's magazine of the period, Godey's Lady's Book, I next examine how the figure of the child becomes a powerful symbol for vulnerability and freedom, unpacking the ways that sentimental rhetoric both served and failed the American homebuilding project. In the last two chapters, I analyze the female authors Caroline Kirkland and Fanny Fern and their attempts to transplant the American home to the West and the urban center, respectively. In A New Home, Who'll Follow?, Kirkland's "hut in the wilderness" becomes the best embodiment of the American Myth. Finally, in the autobiographical novel Ruth Hall and in her newspaper writings, Fanny Fern places her heroines "beyond the pale of female jurisdiction," rejecting the bonds of womanhood, but also revealing fears for the isolated woman and her potential for desolation and madness. Contextualizing Fern within the written output of maternal associations, I conclude with a consideration of the home as complex and multivalent: it is imagined as a space to work and a space free from work, a woman's empire and her prison, a place one desperately hopes to find and a place one wants to escape; the home is where one is free to be herself and where one is cut off and confined.