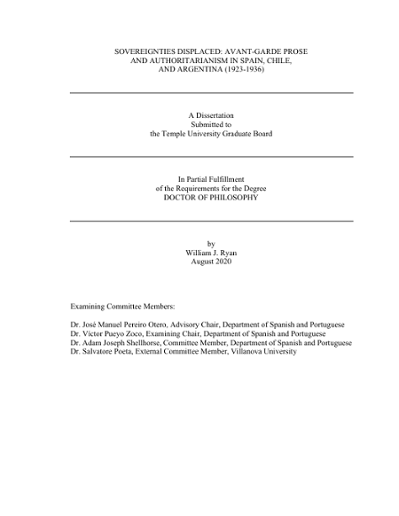 Whereas contemporary debates in Latin American studies addressing sovereignty often focus on dictatorships and the transitions to democratic governments in Latin America in the late twentieth century, Sovereignties Displaced: Avant-Garde Prose and Authoritarianism in Spain, Chile, and Argentina (1923-1936) adopts a transatlantic framework and directs critical attention to the cultural production of the interwar period. The historical and cultural events preceding and following 1929 are connected to World War I, the political crisis of democratic systems, and the global socioeconomic instability of the period. The three countries studied in the present work would be affected by these conditions, sharing an almost synchronic development of the authoritarian governments of Miguel Primo de Rivera in Spain (1923-1930), of Carlos Ibáñez del Campo in Chile (1927-1931), and José Félix Uriburu in Argentina (1930-1932). Additionally, the rise of authoritarianism and the decay of parliamentary institutions characterizing this epoch condition and inscribe the political essays and avant-garde novels composed by the intellectuals and writers analyzed in this study: from Spain, María Zambrano (1904-1991), Ramón Gómez de la Serna (1888-1963), and Benjamín Jarnés (1888-1949); from Chile, Alberto Edwards Vives (1874-1932), Juan Emar (1893-1964), and Vicente Huidobro (1893-1948); and from Argentina, Ramón Doll (1896-1970), Norah Lange (1905-1972), and Roberto Arlt (1900-1942). It should be noted that while considering national circumstances, my argumentation is divided into sections organized not by country, but rather by subject matter: a methodological and theoretical introduction, three analytical chapters, and concluding remarks. Established critical assessments of the avant-gardes, as offered by experts like Renato Poggioli (1907-1963), have underscored that democratic forms of government would provide the initial conditions of possibility of the historical avant-gardes. Other scholars, however, have recognized the interdependency of early twentieth century artistic discourses, revolutionary ideas, and authoritarianism. Informed by the theorization of sovereignty and democracy of Jacques Derrida (1930-2004), and the concept of community of Roberto Esposito (1950-), my research examines, in political essays and vanguard novels, the opposition of individual vis-à-vis collective forms of rule. The texts of my corpus manifest a recurrent concern relating to the tension between self-rule and collective-rule, a dynamic which organizes and destabilizes avant-garde formations themselves. Consequently, I analyze the philosophical and political ramifications of these authors’ defense, negation, or destabilization of the individual-collective opposition in the context of the deterioration of parliamentarism. In my first chapter, I examine the following essays that represent a range of political positions from the interwar years: Horizonte del liberalismo (1930) by María Zambrano, Liberalismo en la literatura y la política (Con una segunda edición de: “Democracia mal menor”) (1934, n/d) by Ramón Doll, and La fronda aristocrática en Chile (1928) by Alberto Edwards Vives. Framed by the sociological assessments of José Ortega y Gasset in La rebelión de las masas (1930), this chapter considers these essayists’ observations regarding mass politics and the role of political and economic elites. I foreground the ethical problems relating to these authors’ conceptions of the human subject and their concomitant formulations of governance, deriving from various ideological orientations. The essayists’ comparable anxieties regarding the limits of democratic politics reveal the complexities of the period and serve as a springboard for the subsequent chapters that study the politics of avant-garde novels. In my second chapter, shifting from essayistic discourse to vanguard fiction, I analyze philosophical oppositions central to the configuration of sovereignty, and to the theory and practice of democracy. These tensions organize various components of the following novels: Un año (1935) by Juan Emar (pseudonym of Álvaro Yáñez Bianchi), 45 días y 30 marineros (1933) by Norah Lange, and El caballero del hongo gris (1928) by Ramón Gómez de la Serna. I demonstrate that, although these narratives do not contain explicit references to the emergence of authoritarianism and the erosion of parliamentarism of the period, these narratives are structured by problems that have implications for a thinking of issues relating to sovereignty and democracy. These novels similarly present how individuals interact with groups, such that it becomes imperative to consider the political consequences of these relations in order to critique, for example, fraternalistic and nationalistic notions of political filiation. My final chapter studies the narrative presentations of radical political projects that aim to restructure society in Los siete locos (1929) by Roberto Arlt, La próxima (1934) by Vicente Huidobro, and Lo rojo y lo azul (1932) by Benjamín Jarnés. In contrast to the narratives included in the second chapter, these avant-garde novels establish an explicit dialogue with the conditions of crisis of the interwar years. From insurrections and utopian settlements, to revolutionary military revolts, these narrations depict small vanguard groups that propose various plots that seek to radically reshape the social order. Even though poetry is often positioned as the paradigmatic form of vanguard literary expression, my research theorizes the understudied phenomenon of Hispanic avant-garde prose. In particular, I account for the variation among avant-garde novels of the period, by sustaining that there are gradations of vanguard narrative depending on different factors that range from the transparency or opacity of linguistic expression, to the organization of the narrative material. In this sense, some novels considered vanguardist, while approaching a certain radicality in terms of language and form, may incorporate elements of the realist-naturalist novelistic tradition. Likewise, I assert the importance of attending to the varied uses of meta-reflexive procedures in Hispanic vanguard prose. Given their implicit and explicit interaction with contemporary historical conditions and political and artistic discourses of the 1920s and 1930s, I contend that the essays and avant-garde novels analyzed offer a fertile ground to examine the nature of sovereignty, while also presenting, in some crucial instances, potential images of what a democracy worthy of this name could look like.