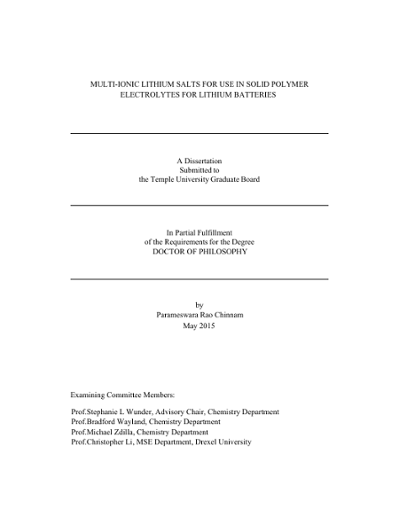 Commercial lithium ion batteries use liquid electrolytes because of their high ionic conductivity (&gt;10-3 S/cm) over a broad range of temperatures, high dielectric constant, and good electrochemical stability with the electrodes (mainly the cathode cathode). The disadvantages of their use in lithium ion batteries are that they react violently with lithium metal, have special packing needs, and have low lithium ion transference numbers (tLi+ = 0.2-0.3). These limitations prevent them from being used in high energy and power applications such as in hybrid electric vehicles (HEVs), plug in electric vehicles (EVs) and energy storage on the grid. Solid polymer electrolytes (SPEs) will be good choice for replacing liquid electrolytes in lithium/lithium ion batteries because of their increased safety and ease of processability. However, SPEs suffer from RT low ionic conductivity and transference numbers. There have been many approaches to increase the ionic conductivity in solid polymer electrolytes. These have focused on decreasing the crystallinity in the most studied polymer electrolyte, polyethylene oxide (PEO), on finding methods to promote directed ion transport, and on the development of single ion conductors, where the anions are immobile and only the Li+ ions migrate (i.e. tLi+ = 1). But these attempts have not yet achieved the goal of replacing liquid electrolytes with solid polymer electrolytes in lithium ion batteries. In order to increase ionic conductivity and lithium ion transference numbers in solid polymer electrolytes, I have focused on the development of multi-ionic lithium salts. These salts have very large anions, and thus are expected to have low tanion- and high tLi+ transference numbers. In order to make the anions dissociative, structures similar to those formed for mono-ionic salts, e.g. LiBF4 and lithium imides have been synthesized. Some of the multi-ionic salts have Janus-like structures and therefore can self-assemble in polar media. Further, it is possible that these salts may not form non-conductive ion pairs and less conductive ion triplets. First, we have prepared nanocomposite electrolytes from mixtures of two polyoctahedral silsesquioxanes (POSS) nanomaterials, each with a SiO1.5 core and eight side groups. POSS-PEG8 has eight polyethylene glycol side chains that have low glass transition (Tg) and melt (Tm) temperatures and POSS-phenyl7(BF3Li)3 is a Janus-like POSS with hydrophobic phenyl groups and -Si-O-BF3Li ionic groups clustered on one side of the SiO1.5 cube. The electron-withdrawing POSS cage and BF3 groups enable easy dissociation of the Li+. In the presence of polar POSS-PEG8, the hydrophobic phenyl rings of POSS-phenyl7(BF3Li)3 aggregate and crystallize, forming a biphasic morphology, in which the phenyl rings form the structural phase and the POSS-PEG8 forms the conductive phase. The -Si-O-BF3- Li+ groups of POSS-phenyl7(BF3Li)3 are oriented towards the polar POSS-PEG8 phase and dissociate so that the Li+ cations are solvated by the POSS-PEG8. The nonvolatile nanocomposite electrolytes are viscous liquids that do not flow under their own weight. POSS-PEG8/POSS-phenyl7(BF3Li)3 at O/Li = 16/1 has a conductivity, σ = 2.5 x 10-4 S/cm at 30°C, 17 x greater than POSS-PEG8/LiBF4, and a low activation energy (Ea ~ 3-4 kJ/mol); σ = 1.6 x 10-3 S/cm at 90°C and 1.5 x 10-5 S/cm at 10°C. The lithium ion transference number was tLi+ = 0.50 ± 0.01, due to reduced mobility of the large, bulky anion and the system exhibited low interfacial resistance that stabilized after 3 days (both at 80°C). Secondly, solid polymer electrolytes have been prepared from the same salt, POSS-phenyl7(BF3Li)3 and polyethylene oxide (PEO). These exhibit high ambient temperature conductivity, 4 x 10-4 S/cm, and transference number, tLi+ = 0.6. A two-phase morphology is proposed in which the hydrophobic phenyl groups cluster and crystallize, and the three -BF3- form an anionic pocket, with the Li+ ions solvated by the PEO phase. The high ionic conductivity results from interfacial migration of Li+ ions loosely bonded to three -BF3- anions and the ether oxygens of PEO. Physical crosslinks formed between PEO/Li+ chains and the POSS clusters account for the solid structure of the amorphous PEO matrix. The solid polymer electrolyte has an electrochemical stability window of 4.6 V and excellent interfacial stability with lithium metal. In order to further enhance the ionic conductivity of solid polymer electrolytes, we have made two improvements. First, we have used so called half cube structures, T4-POSS, that contain 4 phenyl groups on one side of a Si-O- ring, and 4 ionic groups on the other side, and so are true Janus structures. They contain a 4/4 ratio of phenyl/ionic groups, unlike the previous structures that contain 7 phenyl groups/3 ionic groups. At the same O/Li ratio, the ionic conductivity of [PhOSi(OLi)]4 with POSS-PEG8 is higher than POSS-phenyl7Li3 because of more Li+ dissociation in the former case. Second, we have increased the dissociation of the lithium salts by replacing the Si-O-BF3Li groups with Si-(C3H4NLiSO2CF3)4. Both T4-POSS-(C3H4NLiSO2CF3)4 and POSS-(C3H4NLiSO2CF3)8 have been synthesized and characterized, with some preliminary conductivity data obtained.