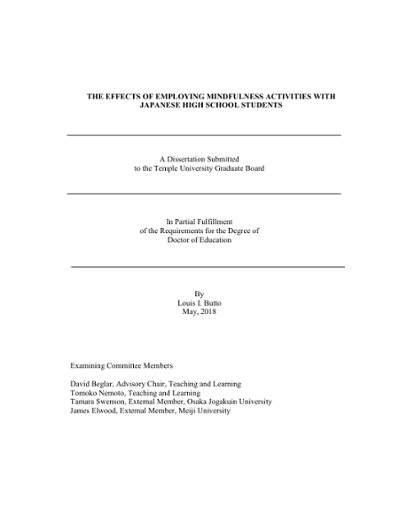 Learning a foreign language can be challenging. If the learning environment is compulsory, motivation can also contribute to the struggles. Mindfulness, a psychological construct, is a robust topic in the academic literature. Mindfulness is a mindset that views the world from multiple perspectives, reorganizing what is perceived, focusing on the present moment and keeping open to new ideas (Langer, 1997). Moreover, mindfulness is claimed to increase interest and academic outcomes. Therefore, the construct was employed in this research to validate these claims and to contribute to second language education. This study was designed to fill several gaps in the second language acquisition (SLA) literature. First, the construct of mindfulness has not been explored in SLA as a mindset to engage students in learning. Second, the construct of interest has not been investigated in SLA in tandem with mindfulness. Lastly, mindfulness has never been employed with motivated or unmotivated high school students in the compulsory education system in Japan. The following research hypotheses and research question were investigated: (a) The treatment group receiving the mindful tasks will outperform the comparison group receiving normal foreign language instruction on vocabulary learning and reading comprehension measures; (b) The treatment group receiving mindful tasks would be more engaged, interested, and like English more than before. Increased interest will lead to improvements in language performance; and, (c) To what extent do mindful practices assist low-achieving proficiency high school students in enhancing their abilities? The participants were students attending a private high school in Japan. Both the treatment and comparison groups included 45 female and 34 male students, respectively, for a total of 79 participants. A Rasch analysis was utilized to confirm the validity and reliability of the mindfulness and interest questionnaires and to transform the raw scores into equal interval measures. MANOVA, ANOVA and Pearson correlation coefficient data were analyzed to ascertain differences between groups and within groups for all tests and constructs measured. The results indicated that mindfulness was not a significant influence on improved outcomes in language performance for the treatment group, although the descriptive statistics did show small gains in the hypothesized direction. The dependent variables included the mindfulness and interest questionnaires, as well as vocabulary and reading comprehension questions. The independent variable was the mindfulness tasks. The dependent variables were vocabulary and reading comprehension measures. The results of the MANOVA were the treatment effect was not significant, F(2,81) = .397, p &lt; .67, η2 = .01. The results of the ANOVA were the treatment effect was not significant, F(1,82) = .82, p &lt; .77, η2 =. 001. There was also no significant correlation between increased mindfulness and increased interest. Out of the six factors, all except for sensitivity to new contexts, showed negative relationships. The only positive relationship was not significant. Lastly, a one-way repeated measures ANOVA showed no improvement for the low-proficiency treatment group, ∧= .30, F(2,18) = 1.30, p &lt; .30, η2 = .13, over time. The effect of mindfulness on improved language performance outcomes might have been influenced by the following: shallow levels of processing, lack of clear goals for the participants, unclear task design protocols, working memory issues and environmental restraints. A lack of correlation between increases in mindfulness and interest gains might have been attributable by the compulsory nature of the course, time constraints and the lack of perceived utility of the tasks by the part pants. Lastly, the reason for the lack of improvement for the low-achieving proficiency participants might not be an issue of proficiency, because both the low- and high-achieving participants of the treatment condition did not improve. Overall, these findings suggest that mindfulness is more nuanced and more complex than originally expected.