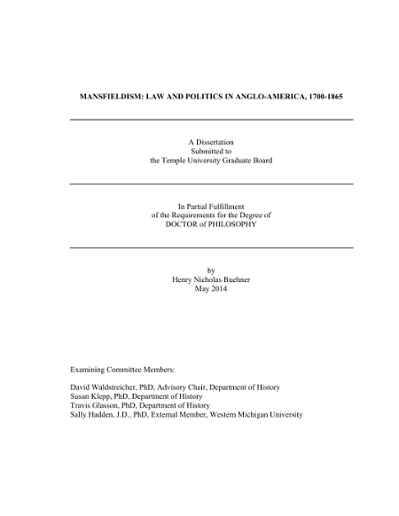 Lord Mansfield is typically remembered for his influence in common law and commercial law, and his decision in Somerset v. Stewart , which granted a slave, brought to England, habeas corpus to refuse his forced transportation out of that nation by his master. Both conditions allowed observers to praise him for what they viewed as very modern notions about economy and society (capitalism and anti-slavery, respectively). Mansfield's primary position as Chief Justice of King's Bench in England, which contributed most of the only published material from him, shielded him from any scrutiny about his wider influence in general British governance in the period of his public career, roughly 1740-1790. Throughout his career, Mansfield played a large role in the general government of the British Empire. Beginning with his role as Solicitor General in 1742 and continuing after he became Chief Justice in 1756, Mansfield interacted and advised the highest members of the British ruling elite, including the monarch. Because the nature of British governance in the 18th Century was very porous, Mansfield partook in the exercise of legislative (through his seats in the House and Commons and Lords), executive (through a formal seat on the Privy Council and later in the King's Closet), and judicial (through his roles as Solicitor and Attorney General, Chief Justice of King's Bench, and temporary positions as Lord Chancellor) power practically simultaneously throughout his career. In these capacities, Mansfield contributed to imperial policy at a critical moment. He was a champion for the British Empire as the beacon of the most perfect society at that time - a perspective he developed through his education and experiences during the crucial formative years of the British nation. He channeled his support for Britain into a seemingly rigid dogma that saw any threat or challenge to British authority or culture as inherently illegitimate. In this regard, Mansfield favored British domination over the other imperial powers, and he immediately rejected the earliest complaints of the Americans over British rule. Because of the nature of his position within British governance, Mansfield's view remained constant in a government that witnessed continual turnover. The potential of Mansfield's influence was not lost upon the public. Many factions from "true Whigs" such as John Wilkes, and American patriots viewed him as the epitome of the problem with the British government-its seemingly arbitrary, unconstitutional, and tyrannical posture toward everything. Mansfield posed a particular challenge for these groups because he was a Chief Justice, and they believed he was supposed to adhere to a strong notion of justice. Instead, they saw him continually leading their repression, and so they questioned the basis of the whole British system. Through pamphlets, newspapers, and visual prints, these groups identified Mansfield as a key conspirator, which they attributed to an anti-British disposition. In these ways, Mansfield and his opponents squared off over the definition of true Britishness internally and imperially. When these opponents gathered enough strength (Londoners during the Gordon Riots, and Americans with their War of Independence), they aimed to pull down Mansfield and his comrades for their violations. The former failed to overthrow society, but they arguably hastened a change in government. The latter succeeded in their movement to exit the Empire. The Revolution was not a total transformation for the Americans, however. They struggled to define their new nation and America had similar imperial aspirations. In this environment, Mansfield was the quintessential symbol of early national "leaders" bipolar attitudes towards Britain. Some leaders such as John Adams embraced their British heritage, and used Mansfield as a model to develop a strong, centralized, commercial nation. Other leaders such as Thomas Jefferson saw Mansfield as the chief villain to the idea of America. Jefferson coined the phrase "Mansfieldism" which he identified as a caustic relationship between law and government that favored the development of political and legal elitism that challenged the interests and participation of common citizens. Jefferson viewed Mansfield as the essential symbol of the American anti-revolution. These first-generation independent Americans both remembered Mansfield for his direct participation in the imperial crisis, but for Adams and his fellow Federalists, they had to initiate redemption for Mansfield to justify their program to create America. The redemption was successful. American institutions used Mansfield to fine-tune the balance between their British heritage and uniquely American outlook. As successive generations of Americans emerged into the political sphere, they remembered his seemingly progressive positions on law and society as presented through his court decisions over his actual participation against their independence. Especially through a selective reading of his decision in Somerset, Mansfield became the legal prophet for abolitionist nationalism. His decision arguably provided a legal precedent against the institution of slavery, but it more importantly transformed into the moral imperative of the movement. In this manner, Mansfield became fully redeemed among Americans.