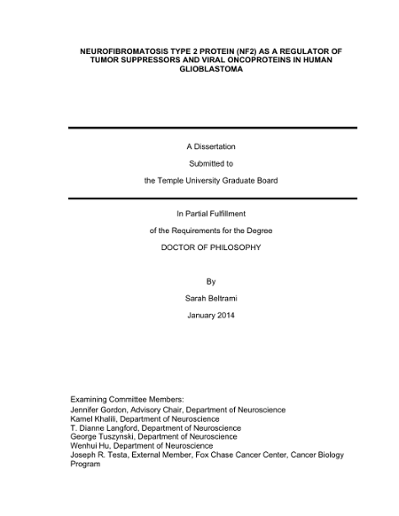 Glioblastomas are the most common brain malignancy occurring in adults with the worst prognosis. Several obstacles have prevented the development of efficacious treatment strategies. Due to the insidious nature of these malignancies, tumors are not typically detected until late in the disease. Further, the delicate nature of surrounding normal brain tissue makes surgery and treatment with cytotoxic chemotherapeutics detrimental to the patient's quality of life. Despite decades of research and aggressive therapeutic strategies, most patients will develop recurrent tumors and succumb to the disease within 1 year of diagnosis. An enhanced understanding of the molecular interplay among tumor suppressors and oncoproteins can greatly contribute to the development of novel therapeutics that will extend life expectancies. The most common abnormality in these tumors is mutation of the p53 gene (TP53). Due to the expansive network of p53-responsive genes, loss of functional p53 prohibits the cell to the ability to regain control of aberrant proliferation in response to oncogenic stresses. Accordingly, glioblastomas have developed several mechanisms to inactivate this potent tumor suppressor. Similar to oncoproteins, viral regulatory proteins utilize p53 to prevent cell cycle arrest. One such example is the protein associated with the human polyoma virus, JC Virus (JCV). JCV is the etiologic agent of the fatal demyelinating disorder, Progressive Multifocal Leukoencephalopathy (PML), seen in severely immunocompromised patients. Infection of oligodendrocytes with JCV leads to their lytic destruction and the development of white matter lesions in PML patients. Its main regulatory protein, large tumor antigen (T-antigen), targets p53 to retain cells in a virus-producing state, thereby conveying an accidental oncogenicity. JCV T-antigen transgenic mice develop a multitude of CNS tumors, including malignant peripheral nerve sheath tumors similar to patients with a form of Neurofibromatosis. Neurofibromatosis types 1 and 2 are inherited cancer disorders resulting from the inactivation of their specific tumor suppressor genes, NF1 and NF2, respectively. Inactivation of the NF2 gene, results in the development of several multiple benign nervous system tumors. Traditionally, NF2 is viewed as a scaffolding protein primarily located at the plasma membrane, where it prevents excessive signaling via several cell surface receptors and their cytoplasmic kinases. NF2 links receptors at the plasma membrane to their cytoplasmic kinases to facilitate contact inhibition. However, NF2 can also interact with an array of cytoplasmic and a few nuclear proteins. To date, little is known about the function of NF2 in tumors not associated with NF2 syndrome. Loss of functional NF2 protein has become a staple of several sporadic cancers including mesotheliomas, and meningiomas. In glial cells, NF2 depletion results in hyperproliferation and development of oncogenic features. In the only prior report addressing the role of NF2 inactivation in glioblastoma, another group demonstrated that NF2 is a potent inhibitor of glioblastoma growth. Previously, our group has identified JCV T-antigen as a nuclear binding partner for NF2 in tumors derived from JCV T-antigen transgenic mice. The association of NF2 with T-antigen in neuronal origin tumors led us to hypothesize that NF2 could regulate the expression of the JCV T-antigen. Here, we report that NF2 suppresses T-antigen protein expression in U-87 MG human glioblastoma cells, which subsequently reduces T-antigen-mediated regulation of the JCV promoter. When T-antigen mRNA was quantified, it was determined that increasing expression of NF2 correlated with an accumulation of T-antigen mRNA; however, a decrease in T-antigen at the protein level was observed. NF2 was found to promote degradation of ubiquitin-bound T-antigen protein via a proteasome dependent pathway concomitant with the accumulation of the JCV early mRNA encoding T-antigen. The interaction between T-antigen and NF2 maps to the FERM domain of NF2 domain of NF2, which has been shown previously to be responsible for its tumor suppressor activity. Co-immunoprecipitation assays performed on a glioblastoma cell line revealed a ternary complex consisting of NF2, T-antigen, and the tumor suppressor protein, p53. Furthermore, these proteins were detected in various degrees in tumor specimens from patients, suggesting that these associations may occur in vivo. Collectively, these results demonstrate that NF2 negatively regulates JCV T-antigen expression by proteasome-mediated degradation, and suggest a novel role for NF2 as a suppressor of JCV T-antigen-induced oncogenesis. Studies in mouse and human tumors have inferred a relationship between NF2 and the primary target for JCV T-antigen, p53. In mouse models of cancer, concurrent loss of NF2 and p53 genes generates a highly malignant phenotype. Other groups reported that loss of NF2 and p53 in human tumors correlated with enhanced tumor grade. In transformed fibroblasts, NF2 can enhance the expression of p53 and promote p53-mediated apoptosis. However, the molecular details of the NF2 and p53 relationship have not yet been elucidated. Based on our data and previous literature, we believed that there is a tumor suppressive synergy that exists between NF2 and p53. Contrary to our expectations, we discovered that NF2 overexpression in U-87 MG cells results in the decline in p53 expression. We observed this effect in the p53-null cell line, Saos2, and in the presence of proteasome inhibitors. Further, we determined that NF2 utilizes cysteine proteases as part of a post translational mechanism to suppress p53 expression. Mutant p53, present in many glioblastomas, was resistant to NF2-mediated degradation. Additionally, we determined that p53 can reciprocally repress NF2 expression, by a post translational mechanism, independent of the proteasome, lysosome, or cysteine proteases. NF2 conformation mutants, S518A and S518D, can both degrade p53 and localize to the cytoplasm. However, the constitutively inactive, open form of NF2, S518D is resistant to p53-mediated degradation. NF2 and p53 do not directly interact, yet we were able to detect these proteins in the same patient glioblastoma samples. Using a conformation-specific antibody, we speculate that the majority of our glioblastoma samples may contain mutated p53. This novel relationship between NF2 and p53 we believe will have strong implications for chemotherapeutic sensitization of these typically resistant tumors. Cumulatively, these studies will provide evidence for novel tumor suppressive roles for NF2 and a greater understanding of the molecular events that shape glioblastoma progression.