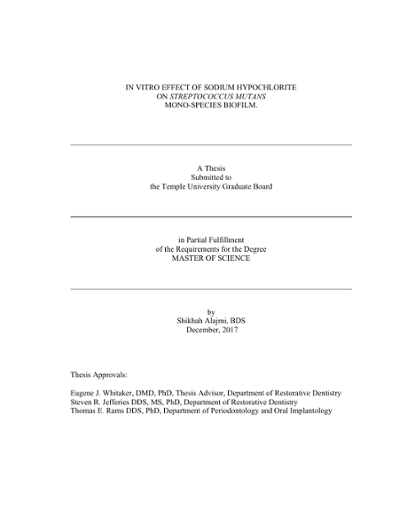 Objectives: Bacterial biofilms are ubiquitous, found in a variety of sites within the human body, and are associated with the pathogenesis of dental caries. They are formed when free-floating microorganisms attach to a surface. One such organism, Streptococcus mutans, has adhesins allowing its attachment to tooth surfaces. S. mutans is associated with all forms of human dental caries. S. mutans can rapidly metabolize dietary sugars to acid, locally creating a low pH on tooth surfaces, where it can optimally grow and become more competitive in dental plaque biofilms, in contrast to acid-sensitive bacterial species associated with sound non-carious tooth surfaces. Commensal and natural biofilm aggregates contain multiple microbial species that are believed to co-exist, interact, and form families with high bacteria and niche diversity. In contrast, most biofilms that are chronically infectious tend to have low bacterial diversity with sovereign mono-species such as S. mutans. Hence, it is advantageous to study mono-species biofilms of dental caries-associated bacteria. Although dental biofilms cannot be completely eliminated, their pathogenicity can be lessened through effective oral hygiene measures. Continuous and regular disruption of dental biofilms is imperative for prevention and management of oral infectious diseases. Mechanical methods, most notably tooth brushing and flossing, are required to regularly and effectively disrupt dental plaque biofilms in the human oral cavity. Antiseptics, such as mouth rinses, can also help control dental plaque biofilms, and may gain access to oral sites inaccessible by mechanical methods. Among available antiseptics, sodium hypochlorite is a particularly potent agent against bacteria, fungi, and viruses. Sodium hypochlorite occurs naturally within phagocytic cells (neutrophils, monocytes, and macrophages) participating in the human innate immune response to microbial infection. Several randomized controlled clinical trials support the efficacy of rinsing twice weekly with 0.25 % sodium hypochlorite to improve periodontal health. To date, no studies have been reported concerning the effect of sodium hypochlorite rinsing on dental caries incidence or progression. Several in vitro studies have addressed the effect of dilute sodium hypochlorite on various oral bacteria species. However, there are no literature reports addressing the effect of sodium hypochlorite on bacteria attached to solid surfaces in biofilms. Hence, the objective of this study is to compare the in vitro antimicrobial effect of sodium hypochlorite to another antiseptic agent, chlorhexidine, on the acidigenic and aciduric bacterial species, S. mutans and Lactobacillus casei, both in a free-form (planktonic) state, and as a biofilm attached to two hard surfaces (glass and hydroxyapatite). Methods: The effect of sodium hypochlorite on S. mutans and L. casei was determined by finding the minimum inhibitory concentration (MIC) by broth dilution assays. The MIC was considered to be the lowest concentration of the agent that prevented bacterial growth, resulting in a clear test tube in a broth dilution assay. Experiments with sodium hypochlorite were repeated twice against each bacterial species, and compared to chlorhexidine in similar assays. The effect of a 20-second exposure of MIC concentration (1.0%) of sodium hypochlorite on the growth of S. mutans planktonic cells was measured. Finally, the effect of a 20-second exposure of 1% hypochlorite on S. mutans single-species biofilms was assayed using sterile microplates and the MBEC Biofilm Inoculator (Innovatech). Results: Values for inhibition of growth of planktonic cells were as follows: sodium hypochlorite (MIC = 0.1%; MBC = 0.1%); chlorhexidine (MIC = 0.0015%; MBC = 0.0025%). A 20-second exposure to either solution at the MBC inhibited growth of planktonic cells in refreshed media. Cells adherent to glass or hydroxyapatite pegs were growth-inhibited, but not detached, in refreshed media by a 20-second exposure to 0.2% and 0.4% sodium hypochlorite, and 0.01% and 0.12 % chlorhexidine, but not by more dilute solutions. Conclusions: Chlorhexidine is more potent than sodium hypochlorite, but dilute solutions of both antimicrobial agents inhibited growth of S. mutans mono-species biofilm cells without detachment of cells.