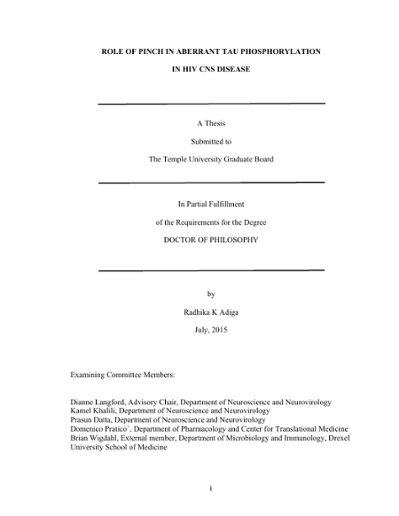 Aged HIV-positive (HIV+) individuals represent a large proportion of the HIV population as life spans are extended significantly by successful antiretroviral therapy. Increased age with HIV infection brings a unique set of central nervous system (CNS) complications including more rapid onset and progression of age-related diseases, loss of protein quality control and accumulation of aberrant proteins, such as hyperphosphorylated Tau (hpTau). In this context, we have discovered a new signaling connection between age-related neurodegeneration and HIV involving the PINCH protein. Particularly interesting new cysteine histidine-rich protein (PINCH), an adaptor protein in neuronal cells is involved in cytoskeletal organization, cell migration and cell survival. While some of the pathophysiological aspects of the PINCH-signaling cascade in tauopathy are largely conserved among neurodegenerative diseases such as Alzheimer’s disease, HIV and others, the presence of the HIV protein Tat impacts specific key points in the PINCH pathway that exacerbate CNS cell dysfunction. In virus-infected cells, Tat regulates viral replication. Even though neurons are not permissive to viral infection, the Tat protein can enter all cell types. Our studies show that Tat interferes with key PINCH signaling partners in neurons. PINCH is robustly expressed by neurons and to a lesser degree by astrocytes in HIV infection of the CNS; whereas, in the healthy CNS, PINCH is nearly undetectable. Similarly, protein phosphatase 1α (PP1α), one of the binding partners of PINCH, is increased in the neurons of HIV encephalitis patients and co-localizes with PINCH in neurons. PINCH is a non-catalytic scaffolding protein that binds integrin-linked kinase (ILK), and PP1α and mediates Akt and GSK3β kinase activities, all of which when disrupted contribute to aberrant Tau phosphorylation. In Tat transgenic mice, increased expression levels of PINCH, PP1α and hpTau were observed. Also, in vivo manipulations of expression levels of PINCH altered the levels of hpTau, where overexpression of PINCH increased hpTau levels in Tat transgenic mouse brains and PINCH knockdown decreased hpTau formation. Furthermore, our studies show that Tat increases levels of hpTau and PINCH, interacts with PP1α and changes the subcellular distribution of PINCH and PP1α in vitro. Tat alters the levels of ILK, Akt and GSK3β, which are key kinases associated with hpTau formation. Furthermore, our preliminary data using expression plasmid for PP1α also shows that overexpression of PP1α decreases Tat-induced aberrant hpTau formation. Our studies address HIV replication-independent functions of Tat in neurons linked to PINCH signaling. These studies address a novel pathway through which Tau may be aberrantly phosphorylated. Thus, understanding new pathways of communication among Tat, PINCH, PP1α, ILK and Tau will open new directions for the study of HIV-associated tauopathy and will provide opportunities for therapeutic interventions in age- and disease-related pathologies. Several studies report associations between the PINCH protein and HIV-associated CNS disease. PINCH is detected in the cerebrospinal fluid (CSF) of HIV patients and changes in levels during disease may be indicative of changes in disease status over time. PINCH binds hpTau in the brain and CSF, but little is known about the relevance of these interactions to HIV CNS disease. In this study, PINCH and hpTau levels were assessed in three separate CSF samples collected longitudinally from 20 HIV+ participants before and after initiating antiretroviral therapy, or before and after a change in the current regimen. Correlational analyses were conducted for CSF levels of PINCH and hpTau and other variables including plasma CD4+ T-cell count, plasma and CSF viral burden, CSF Neopterin, white blood cell (WBC) count, and antiretroviral CNS penetration-effectiveness (CPE). Results suggest that in these HIV participants, changes in CSF levels of PINCH appear to correlate with changes in plasma CD4+ count and with changes in CSF hpTau levels, but not with plasma or CSF viral burden, Neopterin, or WBC, or with anti-retroviral regimen CPE. Furthermore, results from our case matched HIV brain-CSF study confirms that higher levels of PINCH and hpTau are detected in HIV encephalitis brains. Additionally, correlation between PINCH and hpTau levels in brain and other clinical parameters such as age at death, date of death suggesting the era of antiretroviral therapy, CPE score and cognition in HIV patients yielded interesting results that are currently being expanded upon by investigators in the Langford laboratory. Thus, these results suggest that PINCH may be involved in Tauopathy associated neurodegeneration in the HIV CNS disease. Therefore, understanding the contribution of PINCH to HIV-associated Tauopathy may provide a new therapeutic avenue for regulating synaptodendritic dysfunction associated with Tau. Moreover, characterizing the clinical significance of PINCH in the CSF may warrant including PINCH as a member of biomarker panel to assess severity or progression of HIV-associated neurocognitive alterations.