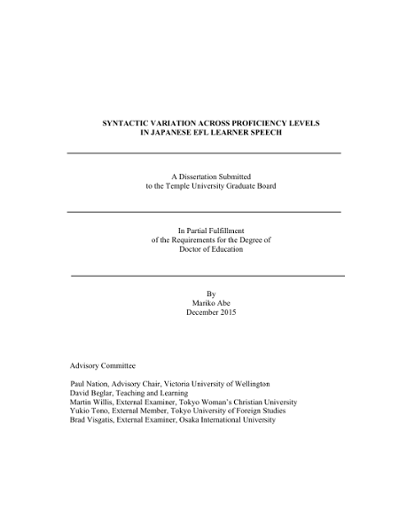 Overall patterns of language use variation across oral proficiency levels of 1,243 Japanese EFL learners and 20 native speakers of English using the linguistic features set from Biber (1988) were investigated in this study. The approach combined learner corpora, language processing techniques, visual inspection of descriptive statistics, and multivariate statistical analysis to identify characteristics of learner language use. The largest spoken learner corpus in Japan, the National Institute of Information and Communications Technology Japanese Learner English (NICT JLE) Corpus was used for the analysis. It consists of over one million running words of L2 spoken English with oral proficiency level information. The level of the material in the corpus is approximately equal to a Test of English for International Communication (TOEIC) range of 356 to 921. It also includes data gathered from 20 native speakers who performed identical speaking tasks as the learners. The 58 linguistic features (e.g., grammatical features) were taken from the original list of 67 linguistic features in Biber (1988) to explore the variation of learner language. The following research questions were addressed. First, what linguistic features characterize different oral proficiency levels? Second, to what degree do the language features appearing in the spoken production of high proficiency learners match those of native speakers who perform the same task? Third, is the oral production of Japanese EFL learners rich enough to display the full range of features used by Biber? Grammatical features alone would not be enough to comprehensively distinguish oral proficiency levels, but the results of the study show that various types of grammatical features can be used to describe differences in the levels. First, frequency change patterns (i.e., a rising, a falling, a combination of rising, falling, and a plateauing) across the oral proficiency levels were shown through linguistic features from a wide range of categories: (a) part-of-speech (noun, pronoun it, first person pronoun, demonstrative pronoun, indefinite pronoun, possibility modal, adverb, causative adverb), (b) stance markers (emphatic, hedge, amplifier), (c) reduced forms (contraction, stranded preposition), (d) specialized verb class (private verb), complementation (infinitive), (e) coordination (phrasal coordination), (f) passive (agentless passive), and (g) possibly tense and aspect markers (past tense, perfect aspect). In addition, there is a noticeable gap between native and non-native speakers of English. There are six items that native speakers of English use more frequently than the most advanced learners (perfect aspect, place adverb, pronoun it, stranded preposition, synthetic negation, emphatic) and five items that native speakers use less frequently (past tense, first person pronoun, infinitive, possibility modal, analytic negation). Other linguistic features are used with similar frequency across the levels. What is clear is that the speaking tasks and the time allowed for provided ample opportunity for most of Biber’s features to be used across the levels. The results of this study show that various linguistic features can be used to distinguish different oral proficiency levels, and to distinguish the oral language use of native and non-native speakers of English.