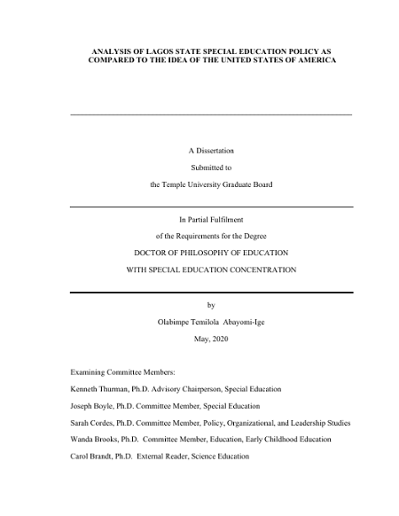 The study is a two-part study that utilized the comparative method of content analysis and Policy Analysis of legal documents. Part one of the study compared special education policy documents of two systems; the Lagos State Special People’s Law and its Inclusive Education Policy to the United States’ Individuals with Disabilities Education Act (IDEA, 2004) to figure out how they compare for the sole purpose of mutual improvement and global competitiveness. Part two of the study is the policy analysis of the Lagos State policies that utilized the results and recommendations from the comparative document analysis (part one). This section of the study focused mainly on how the Lagos State special education documents could be improved using the IDEA of the United States as a model. It also offered alternatives that could be explored as well as recommendations that policymakers in Lagos State could use in order to improve the life outcomes of all children with disabilities in the State. The study addressed explicitly how the United States special education policies could inform the Lagos state policies and vice versa. The overarching purpose of the study was for mutual improvement that could influence special education policy revisions of both systems by respective stakeholders. The study concluded that there is a need for a special education-specific law in Lagos state that will be comparable to the IDEA of the United States so that children with disabilities in the state could become fully integrated into the system and be able to achieve their highest potentials. The study also offers directions for future research.