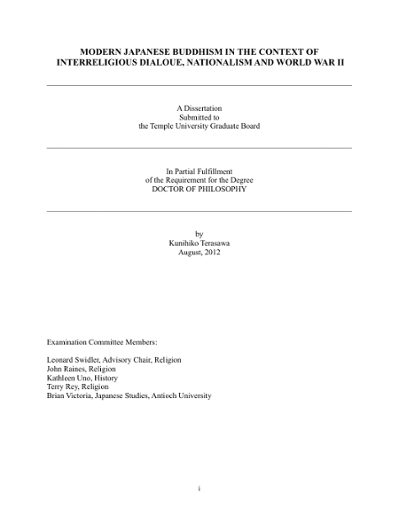 This dissertation studies the critical and historical examination of modern Japanese Buddhism in terms of its collaboration with and resistance to ultranationalism and militarism before and during World War II. It also examines how Buddhism came to Japan and transformed itself according to the historical, social and political contexts throughout history. Also it shows how and why Japanese Buddhism has transformed the Gautama Buddha's teachings, the Dhamma and the notion of community, Sangha to its own in terms in relationship to the state. In order to examine the Japan's modern-nation-state's invention of installing a national consciousness and identity in the people through the means of State Shinto and the emperor, kokutai ideology after the Meiji Restoration in 1868, I apply the methodologies of social critical theories of James Scott, Benedict Anderson, Michel Foucault and Pierre Bourdieu. After the Tokugawa shogunate's long patronage of Buddhism (1602-1868), the dissertation examines how modern Japanese Buddhism was challenged by the Meiji state, and transformed itself to meet the need of the modern-nation-state centered on State Shinto and kokutai ideology. Moreover, it exposes how Japanese Buddhism struggled to meet the modernity itself such as individuality and socialization. Furthermore, in the 1930-40's, in the context of rise of ultranationalism and militarism in the name of "overcoming modernity," this dissertation explores how the Japanese Buddhist sects such as True Pure Land, Nichiren, Zen, and the Kyoto School collaborated with and resisted to them. Despite the main Japanese Buddhism's active participation in the war, there were few Japanese Buddhists' resistances. The dissertation examines why and how they could not effectively resist but failed. Moreover, the dissertation shows that there were several opportunities that Japanese Buddhism might have stopped the state's control of religions--the rise of ultranationalism and war ideology in the cases of Uchimura Kanzô's lese majeste in the 1890's, the state's failures of ratification on the Religious Organization Law twice in the 1920's, and Seno'o Girô's anti-fascist movements in the 1930's--the Buddhists had had critical minds and organizational wills alongside with the interreligious cooperation with Christianity and new religions. Thus, this dissertation critically examines Japanese Buddhism in three terms; the social critical ethics, the interreligious dialogue, and the trans-national dialogue. It shows why and how Japanese Buddhism lost the Buddha's critical mind, social ethics, the democratic origin of Sangha, as well as the trans-national dialogue with Korean, Chinese and South Asian Buddhists and eventually justified the Japanese imperial aggression against Asia. I hope that my dissertation will help the Japanese Buddhists undertake a self-critical examination of their involvement in World War II, and would set up a good example of self-criticism of religion and nationalism. It could certainly help the current Islamic people's struggles for democracy, nationalism and holy war. Also in case of China's nationalistic expansionism which resembles the Japan of 1930-40's, in the name of nationalism and social harmony, religious freedom was limited to the inner private realm, but its public role in checking nationalism was suppressed. Tibetan Buddhism, Falun Gong and house Christian churches cried out for their freedom. Therefore the self-critical examination of the rise and fall of the Japanese empire in terms of religion, religious freedom and ultranationalism might help Chinese religions and intellectuals as well as other cases involving religion, nationalism and war.