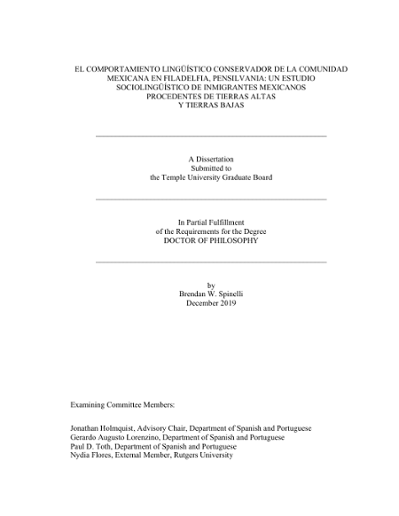 In relation to other Hispanic populations in Philadelphia (e.g. Puerto Rican, Dominican, etc.), the Mexican community reflects a more recent wave of immigration in the city that began in the early 90s. Since its initial establishment, the community has continued to grow and to integrate into the greater Philadelphian society. In comparison to other areas of the United States that have received immigrant groups predominantly from northern Mexico, Philadelphia has been the destination for a significant proportion of immigrants from the state of Puebla. Although those from Puebla represent a substantial portion of the Mexican immigrant population, the city has become home to other groups of Mexican origin, two of which will form part of this study: those from the capital, Mexico City, and those from the east coast, Veracruz. Diverging from common sociolinguistic practices, this dissertation focuses solely on the speech of male immigrants due to a significant larger population of Mexican men who have migrated to Philadelphia. Utilizing social factors such as length of residence in Philadelphia, age, level of education, and region of origin, this study examines the phonological behavior in the speech of 30 male speakers from Mexico City, Puebla and Veracruz. Specifically, the phonological features included are the /s/, /n/, and /r/ in final word position, as well as /e/ and /o/ in final syllables. Using Rbrul, this study analyzes correlations between the above social factors, specific linguistic factors, and variation in the above variables including their maintained and reduced forms. The results from the multivariate analysis not only shed light on the linguistic behavior of each group, but also allow comparisons between the linguistic practices of speakers from each region. Having identified the general tendencies of consonant maintenance in the central regions of Mexico, and their reduction in the coast, as well as vocalic weakening in the center, and maintenance in the coast, this study confirms the continuation of these patterns in Mexican speech after residence in Philadelphia for multiple years. Recognizing the prestige associated with the Mexico City variety as well as the prevalence of central Mexican speakers in Philadelphia, this study analyzes the impact of language change through contact between speakers from the coastal region (Veracruz) and those from the interior (Mexico City and Puebla). Specifically, this project utilizes results from the multivariate analysis to determine if findings reflect a shift form the coastal variety to the more standard, central varieties typically associated with linguistic prestige in Mexico. The dissertation concludes that, despite contact over time, Mexican immigrants are conserving characteristic linguistic features of their local regional varieties. These observations are revealing of how Mexican immigrants are renegotiating notions of linguistic capital and identity after having emigrated from their home country to reside elsewhere.