Work and World: On the Philosophy of Curatorial Practice 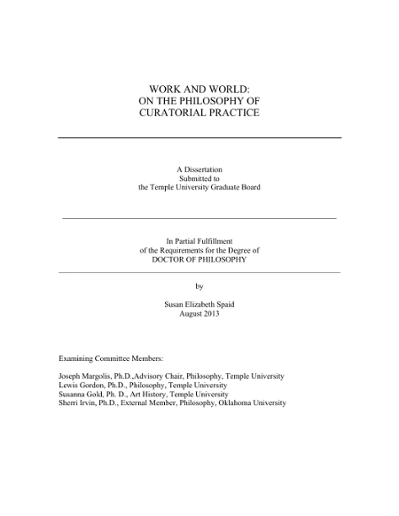 Even though viewers typically experience multiple artworks at a time, philosophers have tended to parse visual art experiences into individuated experiences with singular objects, rather than incorporate the role exhibitions play in contextualizing objects over time. Since visual art experiences typically occur in the context of exhibitions featuring multiple artworks, whether in a museum, commercial gallery, or artist's studio, there are numerous problems associated with considering visual art experiences individuated experiences with single objects. I aim to show how this approach not only produces problems for the philosophy of art, but also perpetuates misunderstandings regarding the visual artist's practice, as well as its reception. My focus on reception poses problems for curators who relish curatorial authority. I prefer practices to products, since it establishes a relationship between each contributor's actions and his/her outcomes, which gain meaning over time, unlike products that arrive ready upon delivery, independent of directed consciousness. Rather than convey an activity particular to sight, the term "visual art experience" distinguishes this type of art experience from types such as theater, film, or musical performances. Such multi-sensorial perceptual experiences, whether indoors or outdoors, accompany one's experiencing artworks, monuments and buildings alike. The philosophical convention of treating artworks as singular objects has led philosophers to exaggerate: 1) the artist's intention (Arthur Danto), 2) artworks' atemporal features (Nelson Goodman), and 3) artworks' expressive/symbolic capacities (Robin Collingwood, Danto, Goodman, and Roger Scruton) inviting aestheticians to treat artworks like texts, penned by a lone author. One consequence of the "lone-author" view is that book reading is the prevailing analogy for visual art experiences, eschewing obviously coauthored analogies such as walking in the park, attending a sporting event, or dining with friends. Books whose advance readers and editor(s) influence their contents before being published are no less coauthored than typical nonart experiences. That exhibitions are coauthored has multiple implications for aesthetics, since it acknowledges the way visual art experiences involve multiple inputs: some combination of curator, spectators, exhibition, milieu, environment, and the facility. The curator typically works with other producer(s), whether artists or exhibition staff, to create some environment, a temporal surrounding comprised of thematically arranged artworks, specifically designed for spectators inhabiting a particular milieu, housed in some facility, which includes the physical surroundings, such as the gallery's conditions, its wall colors, lighting, and scale. This text explores all aspects of curatorial practice from exploration to reception. In differentiating curated exhibitions from non-curated exhibitions, I aim to explain how curators generate frames that visibilize each artwork's nonexhibited features, which seems so obvious in hindsight that particular frames later appear embodied from the onset.