Three Essays on Macroeconomics and Banking 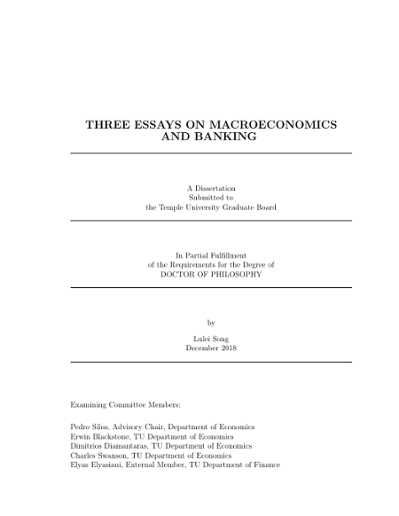 My dissertation covers three loosely connected topics in Macroeconomics and Banking. The first chapter, titled Effect of Failed Bank Mergers During the Crisis on Cost Efficiency, examines the effect of merging with failed banks during the crisis period on the acquiring banks’ cost X-efficiency. Between December 31, 2006, and Decem- ber 31, 2010, the number of U.S. commercial banks and savings institutions declined significantly because of failures. The majority of failed banks were acquired by the existing banks. I utilize the Fourier flexible cost function form to estimate the cost X-efficiency, and find out that merging with failed banks does negatively affect the cost X-efficiency of the acquiring bank. Although the local market concentration does not change much after the merger, the decrease in cost X-efficiency may still indicate the increase of market power for acquiring banks. With the evolving technology, the cost of obtaining banking service from distant providers fell a lot compared with 30 or 40 years ago. Local market concentration may no longer be a good measure of market competitiveness, and the FDIC may need to develop other more relevant measures regarding merger regulations. The second chapter, titled Financial Regulation and Stability of the Banking System, builds a dynamic stochastic general equilibrium model which includes both regulated and unregulated banks to study the effect of the capital requirement, which is imposed only on regulated banks, on the stability of the financial system. One of the most distinctive features of the recent financial crisis is the turmoil of the financial market. Financial institutions with high leverage were the first to bear the brunt, and the chain effect caused by their bankruptcy led the economy into a prolonged depression. In order to stabilize the financial market and prevent financial institutions from taking excessive risks, the government imposed capital requirements on the regulated banks. However, a large number of financial institutions, which perform similar functions as regulated banks, are not under government regulation. In this paper, I build a model which includes both regulated banks, referred to as commercial banks, and unregulated banks, referred to as shadow banks, to study and quantify the effects of capital requirements on the stability of the financial system. I find that when the capital requirement is high enough to help commercial banks to survive the bank runs, it does help to alleviate the negative impact of the crisis. However, if the capital requirement is not high enough, increasing capital requirements only causes decreased net output but does not help to stabilize consumption and capital price during the crisis. The third chapter is titled The Effect of Monetary Policy on Asset Price Volatility: Evidence from Time-Varying Parameter Vector Autoregression Approach. The great financial recession in 2007 - 2009 reactivated the discussion of the effect and the focus of monetary policies. Some researchers argue that whether the monetary authority should take action to fight against the asset price bubbles prior to 2007 aside from targeting inflation and GDP gap. However, one important fact that often get ne- glected is that the volatility of the financial market is also closely related to monetary policy shocks, and it has an important impact on economic output and unemployment in the economy. This paper utilizes two empirical methods, constant parameter structural vector auto-regression and time-varying parameter vector auto-regression, to study the relationship between monetary policy and financial market volatility. I find that under these two different methods, the financial market volatility responds differently to the monetary policy shocks.