Memorializing the Masters: Renaissance Tombs for Artists and the Cults of Raphael and Michelangelo 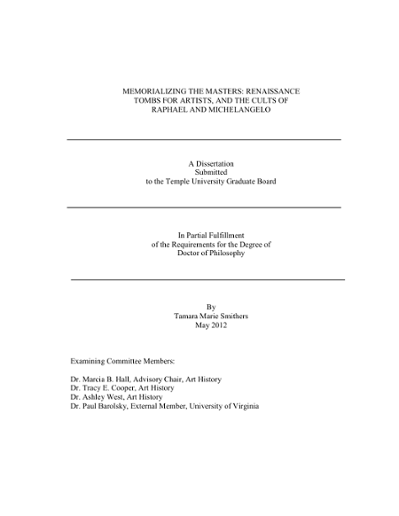 In this study, I argue that the cult of the artist centered on memorial making. From the Quattrocento through the Seicento, the growth in the size and number of memorials for artists parallels the changes that took place regarding the social class, professional position, and economic privilege of practitioners of the three main visual arts, painting, sculpture, and architecture. Similar to portraits, self-portraits, personal emblems, and signatures, tomb effigies and epigraphs were a type of construction of identity that articulated similar notions, serving as a form of popular praise and as a way to preserve one's memory for posterity. Moreover, tombs for artists existed in the public sphere on a grand scale, reaching larger audiences and thus having a greater cultural impact. Additionally, in tandem with contemporary art theory, tomb making became a tangible outlet for the paragon of the arts and for comparison against each other. The funeral ceremony functioned not only as a communal display of local pride but it also served as a vehicle for constructing artist-patron relationships and a way to promote the profession. The faculty to fashion artistic ties through the public spectacle of the funeral and the permanent medium of the memorial proved to be particularly essential for the newly formed art academies in regard to group identity and professional bonding. Publicizing the unification of the three arts was a key concern for the academies, especially in regard to decorating communal burial sites and devising group insignia. The display of emblematic imagery in addition to the erection of inscriptions that link the artist to his master on the tomb memorial became a palpable way to formulate an artistic pedigree for that particular artist and for that associated community of artists. The early art companies in central Italy--I Virtuosi al Pantheon in the 1540s in Rome, the Accademia del Disegno in the 1560s in Florence, and the Accademia di San Luca in the 1590s in Rome--were founded with the intention to properly bury their members. Moreover, for members, establishing ties to Raphael and Michelangelo, who received unprecedented burials, were hailed as symbolic figureheads for the academies, and were venerated as "artistic saints," lies at the center of sixteenth-century memorial making for artists. For some in the profession, as was the case for the followers of Raphael, being buried near their capomaestro solidified real or desired connections. The display of what was believed to be Raphael's skull in the seventeenth-century Roman Academy exhibits the new regard for the artist. The physical being of the artist came to be an object charged with meaning, similar to a holy relic, bringing new meaning to the concept of the "divine artist." For others, viewing the miracle of the unmarred corpse of Michelangelo, their padre delle tre arti, upon the opening of his coffin after it arrived in Florence, left a lasting impression. By exploring the panegyric following of Raphael and Michelangelo with a focus on tomb memorials, this dissertation explores what is meant by the phrase the "cult of the artist," especially in relation to these two masters. In doing so, this study synthesizes and weaves together otherwise disparate sources in order to elucidate a better understanding of the idea of the artist during the Early Modern period in Italy. As it proves, honoring the artist through the creation of memorials was the principal way to publicly pay tribute to those in the trade and provided a new type of artistic camaraderie.