THE INFLUENCE OF ROMANTIC PARTNERS ON MALES’ DECISION-MAKING 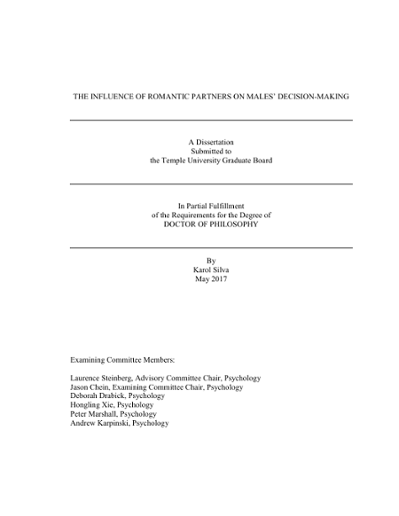 Evolutionary models of adolescent and young adult risk-taking posit that risk-taking increases during this period of the life span as a strategic way for males, in particular, to show dominance, increase perceptions of attractiveness by the opposite-sex, and maximize their chances of acquiring a romantic partner (and ultimately produce offspring). Consistent with this perspective, existing research demonstrates that attractive females increase risk-taking in single males, in part by enhancing males’ sensitivity to rewards and diminishing their ability to inhibit impulsive behavior. By contrast, romantically committed males engage in less risk taking than their single counterparts, although the mechanisms underlying the effect of romantic partners/partnerships on male risk-taking are less clear. In the present study, I employed a behavioral paradigm that has been used in prior studies of peer influence to examine how romantic partners affect decision-making processes and risk-taking behavior in young heterosexual males (18 to 24 years old). I also explored whether there are particular individual and relationship characteristics that moderate the effect of romantic partners on males’ decision-making. This study was conducted using a sample of 134 romantically involved males (mean age=20.2, SD=1.65; 64% White) who were randomly assigned to participate in one of three experimental conditions: alone, in the presence of an attractive female confederate, or in the presence of their romantic partner. Across conditions, I compared males’ behavioral performance on five outcome measures: risk taking (using the Stoplight Task), preference for immediate rewards (using a Delay Discounting Task), reward learning and cost avoidance (using a modified version of the Iowa Gambling Task), and inhibitory control over both neutral and emotionally charged stimuli (using cognitive and emotional versions of the Stroop Task). I found that the presence of romantic partners diminishes risk taking in males, but that romantic partners do not have a significant impact on males’ sensitivity to rewards (neither immediate nor long-term), sensitivity to loss (i.e., cost avoidance), or their ability to inhibit attention to interfering—neutral or emotional—stimuli. However, improvements in cognitive control in the presence of romantic partners were observed among males who report low levels of passionate love. That is, mildly infatuated males exhibited better cognitive control in the presence of their romantic partners relative to mildly infatuated males who were alone. Partner presence had no such effects among males who reported being highly infatuated with their girlfriends. The presence of an attractive female stranger triggered a protective response among romantically involved males—prompting them to take fewer risks (when they are highly committed to their partners), to more quickly avoid decisions that lead to long-term loss (among older males only), and to exhibit better cognitive control (only among males in relatively longer relationships). The presence of an attractive female stranger did not affect males’ sensitivity to rewards. Evidently, the relative impact of an attractive female stranger on males’ risk taking and decision-making is highly dependent on individual and relationship factors, a finding that emphasizes the importance of context when it comes to understanding males’ relative susceptibility to temptation (e.g., other females) and opportunities for potential risk (e.g., infidelity). By contrast, the dampening effect of romantic partners on male risk taking is neither dependent on individual or relationship characteristics nor the result of romantic partners’ influence on reward sensitivity or inhibitory control. However, given the finding that romantic partners enhance cognitive control when feelings of passionate love are relatively low, future research should examine how passionate love and cognitive control interact to predict risk taking. Although I could not identify potential mechanisms to explain why the presence of romantic partners diminishes males’ risk-taking, the current study demonstrates that under specific circumstances—such as when there is high relationship commitment or when the relationship is relatively long—the presence of an attractive female stranger can stimulate romantically involved males to engage regulatory processes that may contribute to their reduced inclination toward risky behavior in that context. This finding is consistent with prior studies and suggests that the presence of tempting stimuli and potential threats to relationship fidelity can trigger males’ deliberate engagement of regulatory processes in effort to maintain their current romantic relationship. In contrast, males’ reduced inclination to engage in risky behavior in the presence of their romantic partners may be automatically activated (without inducing a particular psychological state) regardless of individual and relationship characteristics.