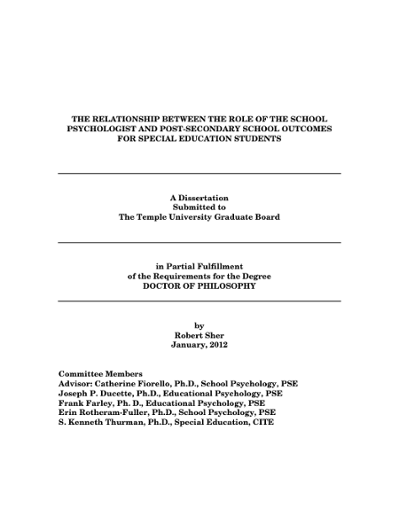 Since the federal law IDEIA of 2004 allowed for the determination of LD eligibility for Special Education services, it was expected that School Psychologists would have begun spending less time devoted to standardized tests, and more time providing other services such as counseling, consultation, and interventions. Moreover, any benefit that these services might have for students would ideally extend beyond the K-12 period when they receive these services. This study compares the time school psychologists spend engaged in service delivery unrelated to testing with post-school outcomes for special education students. Data are compared from all 50 states, as well as other variables such as the ratio of students to psychologists, socio-economic status, and per pupil spending. While time not testing did not correlate with post-school outcomes, other variables proved to correlate significantly, and are discussed in accordingly. Data were collected from a variety of sources, including state and national governments, education departments, professional school psychology organizations, and research institutions. Students' post-school outcomes were tracked for eight years after high school, and measured and compared based on level of education. The ratio of students to school psychologists proved to correlate significantly with the graduation rate of special education students both from high school and from four-year secondary institutions, suggesting that the fewer students a psychologist serves, the better the outcomes for those students. However, socio-economic status (as represented by students receiving free lunch or lunch assistance) was by far the most significant correlate with school and post-school outcomes, necessitating comparisons between statistics with that variable removed. Ultimately, variables for which school psychologists have little control, such as socioeconomic status, the ratio, per pupil spending, the percentage of students receiving ELL instruction, and other factors, proved to be more significant in their correlation with graduation rates and post-school outcomes than how much time psychologists spent providing services other than testing. Further study is recommended, as various elements of this study proved to limit the value of the results, such as the use of states as units of study, as opposed to smaller units, the inability to further divide the ways in which psychologists allocate their time, and the inability to obtain post-school data for more specific subsets of the special education population, such as LD. A study employing smaller units of comparison, such as school districts, and which could accurately measure time school psychologists spend in a variety of service delivery capacities, as well as more uniform groups of special education students, is recommended.