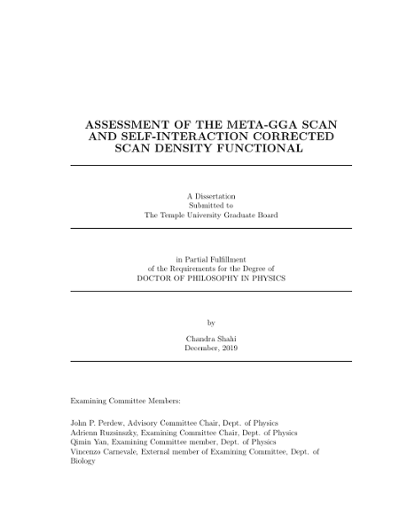 Kohn-Sham density functional theory is a widely-used method to predict the ground-state total energies and densities of interacting correlated electrons in atoms, molecules, clusters, solids, and liquids. In principle, exact results for these properties can be found by solving self-consistent one-electron Schrödinger equations based upon density functionals for the energy. In practice, the density functional for the exchange-correlation contribution to the energy must be approximated for the sake of computational efficiency. More accurate but still computationally efficient approximations are being developed by the satisfaction of exact constraints. These include the SCAN (strongly constrained and appropriately normed) semi-local density functional. We used the pressure induced structural phase transition of solids to validate SCAN. To predict an accurate critical pressure, a method must account for a small energy difference between close-lying phases which have very different electronic structures. We computed the critical pressure for the structural phase transition of 25 group IV, III-V, and II-VI compounds using the local density approximation (LDA), Perdew-Burke-Ernzerhof (PBE), and SCAN. LDA systematically underestimates the critical pressures as reported in a previous study. PBE which often improves upon LDA performances yields under- or overestimated pressures in many cases. SCAN, on the other hand, predicts accurate critical pressures with an accuracy comparable to the computationally expensive methods like the quantum Monte Carlo (QMC), random phase approximation (RPA), and the hybrid functional HSE06, in the cases where pressures with these methods are reported. The impressive success of the approximate density functionals, however, comes at a price. There is an incomplete cancellation of the hartree and approximate exchange energies for one-electron densities, giving rise to a spurious interaction of an electron with itself. This is called the self-interaction error (SIE). Perdew-Zunger self-interaction correction (PZ SIC) makes an approximate density functional SIE free for all one-electron density. The transition states, which involve stretched bonds, are poorly described by the semilocal density functionals. Thus LDA, PBE, and SCAN predict too low barrier height for a chemical reaction. We tested the Perdew-Zunger self-interaction correction (PZ SIC) for the barrier heights of the representative test set BH6. We found that the barrier heights are greatly improved when we go from LDA to PBE to SCAN. We also tested the PZ SIC for the atomization energies of the molecular test set AE6. SCAN predicts very accurate atomization energies, whereas SCAN-SIC severely worsens the atomization energies. We attribute such worsening to the noded localized orbitals, over which the PZ energy is minimized. The nodality of the orbital density is a consequence of the orthogonality criterion for overlapping real orbitals, and this nodality increases when free atoms bind to form a molecule. This explains why the error in the atomization energies is reduced when the PZ energy is minimized using complex orbitals, which yield nodeless orbital densities. The complex orbitals, however, do not completely eliminate the error. The remaining error is attributed to the fact that PZ SIC loses the exactness of LDA, PBE, or SCAN for densities that vary slowly over space, calling for a generalization of the PZ theory.