JEHOIACHIN AND HIS ORACLE: THE SHAPHANIDE LITERARY FRAMEWORK FOR THE END OF THE DEUTERONOMISTIC HISTORY 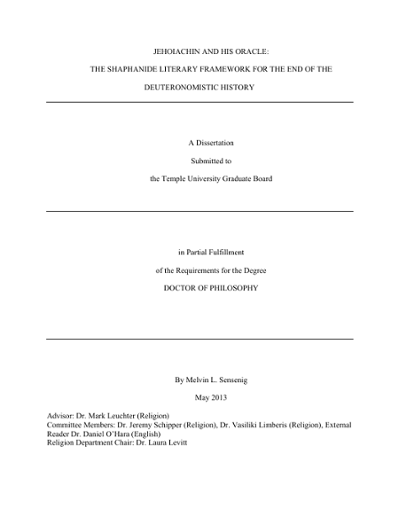 Four oracles appear in Jeremiah 21:11-23:8 detailing the failure and future of the final kings in Judah, also known as the King Collection. The final oracle against Jehoiachin (he also appears with the names Coniah / Jeconiah) precedes the announcement of the unnamed new Davidide, the Branch. The oracle against Jehoiachin appears to be unique, involving no stipulations of covenant wrongdoing, a feature of Deuteronomistic criticism of the kingship since Solomon. He is one of the most unremarkable kings in Israelite history. Yet, he is the concluding figure in both the Greek (Septuagint or LXX) and Hebrew (Masoretic Text or MT) versions of Jeremiah's King Collection, a significant change from the accounts in Kings and Chronicles. He occupies an important place in Josephus's attempts to sketch the ideal Israelite king, respectful of Roman rule. He is important to the rabbis in developing an atonement theory of the exile. In the New Testament, he appears in Matthew's genealogy of Jesus, while the other kings from the King Collection disappear. The Epistle to the Hebrews may adopt similar ideas in developing the analogy of Melchizedek, another insignificant king in Israel's history, as a precursor to Jesus. Ideas developed from the flow of the oracle in the text of Jeremiah, shaped by the polemics of exile, appear in the Acts of the Apostles' casting of Jesus' spiritual kingship on the world's stage. Precritical Jewish and Christian exegesis adopted a harmonizing approach to the oracle, importing reasons from the Deuteronomistic History and the Chronicler for its harsh judgment. Yet discussion of the oracle and its significance in the construction of the figure of Jehoiachin in Jeremiah has all but disappeared from critical scholarship following the groundbreaking work of Bernhard Duhm. Early critical scholarship, while correcting many of the mistakes of precritical exegetes, followed the new Protestant confessionalism of the 19th century. Michel Foucault locates the loss of the theology of the cross as this decisive turn in interpretive methodology. This turn caused modern Protestant interpreters, who are mainly responsible for the foundations of modern critical studies in Jeremiah, to devalue disempowered kings in Israel's history, one of the most important hermeneutical categories in classical Jewish literature, according to Yair Lorberbaum. Thus, Bernhard Duhm, and later scholarship that builds on his work, missed the significance of this oracle in the textual function of the book of Jeremiah and its polemical significance in the debates between post-exile groups of Judeans. Gerhard von Rad, in his revision of Martin Noth's theory of the Deuteronomistic History, saw the importance of Jehoiachin as a source of hope for a renewed Israel. Jack Lundbom most recently observed the development of an oracular frame moving from the center outward in which the oracle against Jehoiachin appears. Yet, to date, little work has appeared on the way the canonical form of Jeremiah frames Jehoiachin and its effect on Jeremiah's end to the DtrH. To make sense of it, we must account for what appears to be an unfulfilled prophecy in Jeremiah 22, as recorded by Jehoiachin's treatment in Jeremiah 52 where, against the expectation of the oracle, the Jewish king again appears on the world stage. Mark Roncace has written extensively on how this type of prophecy functions in the book of Jeremiah. Speech-act theory, as proposed originally by J. L. Austin, and refined by his protégé, John Searle, provides further insight into this issue. Building on the scholarship of von Rad, Lundbom, Mark Leuchter and several other scholars of the sociopolitical forces in the production of biblical texts in exile, we will reconstruct the remarkably adaptable prophetic frame developed in exile around Jehoiachin and his oracle, which set the stage for a return of a Jewish king to the world stage.